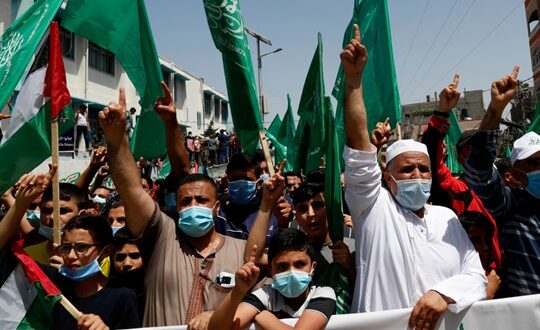 Palestinian Politics Are More Divided Than Ever

The cease-fire that entered into force last Friday brought an end to 11 days of fighting between Israel and Hamas, leaving behind at least 248 Palestinian and 12 Israeli dead, as well as untold destruction in Gaza. Yet even as the fragile truce is holding thus far, the power struggle between the two largest Palestinian parties—Hamas and its rival, Fatah—seems poised to only intensify.

The most recent round of violence was the fourth since 2007, when Hamas violently wrested control of Gaza after winning elections the previous year. It took place against the backdrop of an intense political crisis triggered by Palestinian President Mahmoud Abbas’ decision to call, then cancel, the first round of Palestinian national elections since that 2006 vote. Abbas’ Fatah, which controls the Palestinian Authority from the city of Ramallah, in the West Bank, was largely seen as irrelevant during the Gaza conflict, and is reeling from internal divisions that were exposed and deepened by the ill-conceived election gambit.

Hamas, on the other hand, is seeking to capitalize on Fatah’s weakness, as well as the sympathy generated by its war with Israel, in order to assert itself as the dominant party in Palestinian politics. Yet as the dust settles and the slow process of reconstruction begins, Palestinian political dysfunction will remain, with meaningful national unity unattainable amid deepening public alienation from the political system.

An Islamist organization designated as a terrorist group in the U.S., Europe and parts of the Arab world, Hamas emerged during the 1990s as the main competitor to Fatah, the secular movement that had dominated Palestinian politics and institutions since the 1960s. Hamas’ rise was fueled by the failure of the peace process, which it vehemently opposed from the outset, and by the corruption and poor governance that plagued Fatah’s rule. A convincing victory for Hamas in the 2006 elections triggered a crisis that culminated in a mini-civil war in 2007, leaving Hamas in control of the Gaza Strip and the Palestinian Authority in control of parts of the West Bank.

The recent escalation in Gaza occurred against the backdrop of a particularly fraught moment in Palestinian politics. In January, Abbas called for a series of national elections, starting with a parliamentary vote scheduled for late May, followed by a presidential one in July. But long-simmering discontent with Abbas’ leadership soon came to the surface, with three major Fatah-affiliated lists registering to compete in the elections. Facing the prospect of a repeat of the 2006 polls, when internal divisions within Fatah greatly contributed to its defeat against Hamas, Abbas decided to cancel the vote. In the meantime, clashes between Palestinians and Israelis in Jerusalem, including raids by Israeli security forces on the highly sensitive al-Aqsa Mosque, generated widespread Palestinian anger.

Hamas saw a chance to both capitalize on Fatah’s disarray and present itself as the defender of Palestinians. Indeed, domestic politics was arguably the main motivator for Hamas to fire rockets at Jerusalem on May 10, knowing full well that this would elicit a devastating Israeli response. The gambit proved successful. Throughout the conflict, the Palestinian Authority was ineffectual, unable to mobilize even the bare minimum diplomatic or political response to the fighting in Gaza and largely ignored in international and regional mediation efforts, beyond some pro forma nods to Abbas. This absence exacerbated a preexisting public disenchantment with the Palestinian Authority, which is seen by a growing number of Palestinians—51 percent, according to a recent poll—as a liability rather than an asset.

Internally, Fatah is facing one of its worst crises since its creation. The divisions that emerged in the run-up to the canceled elections will not go away, as they are rooted in longstanding grievances and dissatisfaction with Abbas’ authoritarian leadership style. The discontent encompasses a wide array of Fatah constituencies. Mohammad Dahlan, the former party leader who was expelled and exiled by Abbas, rallied Fatah members in Gaza who feel abandoned by Abbas. Marwan Barghouthi, the popular Fatah leader serving five life sentences in an Israeli prison for murder convictions, galvanized many young activists when he announced in late March that he would be backing a separate list from the official Fatah candidates. And Nasser al-Kidwa, a nephew of the long-time Palestinian leader Yasser Arafat, channeled the discontent felt by many older members of the Fatah establishment. If not addressed, these divisions will only deepen and could be a preview of a potential implosion within Fatah, particularly as the 85-year-old Abbas has not put in place a clear succession mechanism.

For its part, Hamas has been buoyed in the immediate aftermath of the conflict, with leaders of the organization rushing to declare victory. In the hours and days after the cease-fire, Palestinian demonstrators gathered at al-Aqsa Mosque, chanting slogans in support of Hamas and waving the group’s flag. But beyond its immediate spike in popularity, Hamas will face challenges. While it is too early to assess the full scale of the damage to Hamas’ military wing from the recent fighting with Israel, there is no doubt that its armed capabilities have been severely degraded. Diplomatically, the recent round of fighting highlighted Hamas’ international and regional isolation. Notably, Hamas’ regional backers—Qatar and Turkey—played second fiddle to Egypt during negotiations over the cease-fire, in contrast to the 2014 war, when they tried to replace Cairo as the key broker of peace in Gaza.

As in previous rounds of fighting in 2008 and 2014, the initial rally-around-the-flag effect in Gaza will likely give way to bitterness once the scale of the destruction sinks in, international aid funds inevitably fail to materialize and the Gazan public once again begins questioning whether their suffering was worth it. Indeed, once the dust settles, Hamas will probably find itself more popular among Palestinians outside Gaza than within. Hamas will try to use this to agitate in the West Bank and try to organize mass protests in order to put pressure on the Palestinian Authority, as it has already been trying to do since the latest fighting broke out. Yet these efforts have been unsuccessful, likely due to a lack of public appetite for escalation and preventive measures by Israeli and Palestinian Authority security forces. This could change, but for now Hamas seems unable to translate its increased popularity into concrete political influence.

Tactics and posturing aside, the wider Palestinian political landscape will likely emerge from this round of fighting more deeply divided, with each of the key actors’ hands weakened. The election debacle raises serious questions about the potential for Palestinian reconciliation. In the years after Hamas’ takeover of Gaza, Fatah and Hamas tried every conceivable power-sharing mechanism—comprehensive reconciliation agreements, limited arrangements, successive attempts at unity governments and elections—brokered by a range of regional actors including Saudi Arabia, Egypt, Qatar and Turkey. All have failed. It is thus fair to wonder if reconciliation is even possible or if the root causes of the Fatah-Hamas split—ideological, political and security-related—are too deeply entrenched at this time to be addressed.

As factional politicking continues, there is a growing number of Palestinians who feel alienated from both sides: Hamas’ cynical authoritarianism in Gaza and Fatah’s ineffectual authoritarianism in the West Bank. Neither of them is capable of producing a convincing vision for ending the Israeli occupation and providing prosperity and good governance for their people. The growing number of Palestinians who have no faith in their leaders, institutions and political ideologies does not bode well for the future of the Palestinian national movement or for stability.

At the same time, the Palestinians’ international partners can channel aid directly to beneficiaries in Gaza and away from Hamas, while taking measures to impede the group’s rearmament. Arab countries—particularly those that have diplomatic relations with Israel—can support Gaza’s reconstruction to dilute Qatar’s influence, which favors Hamas. And pressuring the Palestinian Authority to engage in meaningful reform can go a long way to rebuilding its domestic legitimacy.

All of these steps can play an important supporting role. Ultimately, however, Palestinians themselves will need to come together to address their divisions.