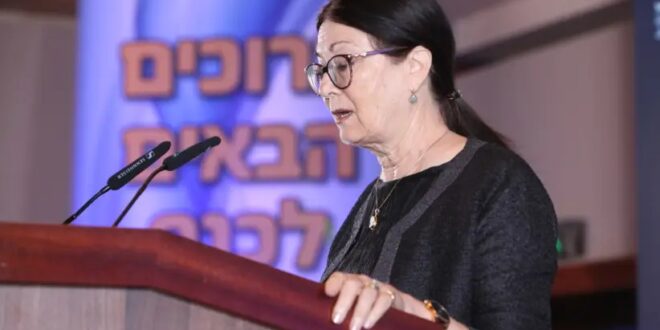 Yariv Levin said if court ever strikes down a Basic Law as unconstitutional, he will call on government to ignore the ruling.

Without explicitly mentioning Levin, but clearly hinting at him, she told an Israel Bar Association conference in Eilat: “There are public servants who have taken the liberty to call for noncompliance and disrespect of court rulings with which they do not agree.”

“There is a great threat embedded in these highly irresponsible statements, and it is important to clearly warn about it: that undermining the legitimacy of the courts and its rulings undermines the principle of the rule of law, and from there, the path to anarchy and chaos is a short distance,” Hayut said.

Last week, the Supreme Court, in a 6-3 vote, for the first time threatened to strike down a Basic Law relating to the budget as highly problematic and not in line with the parameters of Basic Laws.

Basic Laws are considered Israel’s quasi-constitution, so there is a question of whether the Supreme Court had the power to intervene or even to hear the case.

A number of right-wing political officials – with Levin the highest-ranking among them as head of the legislative branch – publicly said if the court ever strikes down a Basic Law as unconstitutional, they would call on the government to ignore the ruling.

Levin has been an arch-critic of the Supreme Court for years and advocates wholesale changes to its structure and powers to significantly reduce its ability to weigh in on public policy issues, which he considers to be within the sole purview of the Knesset.

Hayut and most top judicial officials for years have pleaded with the Knesset to pass a constitution that will restrain populist tendencies by the Knesset so that the court is not put in the position of being the only party that can do so, while essentially inventing the rules for restraint through the Basic Laws.

Regarding the specific Basic Law on the budget in question, the court said it could have authority to intervene because the law contradicted the underlying principles of other Basic Laws relating to the budget.

Further, the Supreme Court said the disputed law was, in effect, a short-term political fix simply labeled (wrongly) as a long-term Basic Law to try to distance the court away from the issue.

Three justices dissented and said the court lacked the authority to analyze or characterize whether a Basic Law is properly thought out as a long-term principle or is a narrow short-term political fix.

Attorney-General Avichai Mandelblit backed Hayut’s counterattack, saying the legislative branch in a democracy must respect and obey rulings of the judicial branch even if it does not agree with them.

No democracy or system based on rule of law can function without these basic tenets, he said.

Mandelblit said he was greatly disappointed by the recent heightened attacks on the Supreme Court by public officials, alluding to Levin and others.

Justice Minister Benny Gantz also came to Hayut’s defense, warning that “the court is having to maneuver under fire and having to hold together the stability of the governing system, which is being held hostage from election to election.”

That certain public officials, such as the justices, are being attacked for doing their jobs, he said, “raises the concern that we did not learn the lesson in Jewish history from the murder of [Yitzhak] Rabin.”

Levin responded unapologetically to Hayut on Monday, saying she and the court had crossed the line by intervening regarding Basic Laws.

It was his job and prerogative to defend the sovereignty of the Knesset from the court overstepping its bounds, he said, adding that he would continue to do so.