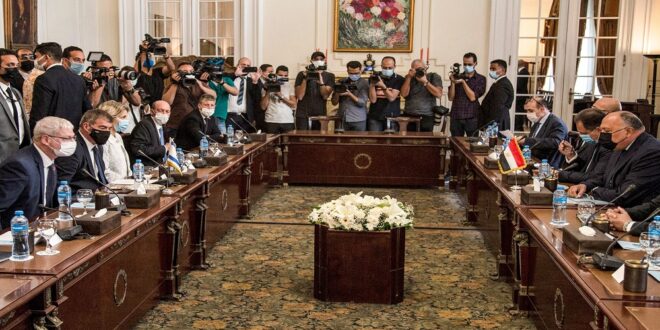 Israeli Foreign Minister Gabi Ashkenazi on Sunday made a one-day visit to Egypt to discuss bilateral issues and the Gazan conflict with his counterpart, Sameh Shoukry, and other officials.

The trip was the first by an Israeli foreign minister in over 13 years, and comes after this month’s 11 days of intense fighting between Israel and Hamas in the Gaza Strip, located between Israel and Egypt. Coinciding with Ashkenazi’s drop-in, Cairo’s intelligence chief Abbas Kamel traveled to Jerusalem to meet with Prime Minister Binyamin Netanyahu and other top officials.

Kamel was later hosted in Ramallah by Palestinian Authority President Mahmoud Abbas, handing Abbas a message from Egyptian President Abdel Fattah al-Sisi affirming the latter’s support for the Palestinian people, according to Egypt’s state news agency. Cairo, later joined by Washington, served as top mediator for a cease fire between Israel and Hamas, securing a truce that has now held fast for more than a week.