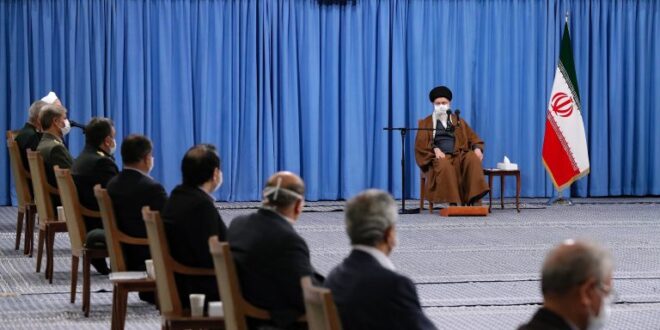 The regime has shaped the field of candidates in the June 18 presidential election to favor the preferred choice of Iran’s Supreme Leader.

The front-runner in the campaign, Judiciary chairman Ibrahim Raisi, is also Supreme Leader Ali Khamene’i’s choice to succeed him.

The exclusion of most moderate and reformist candidates from the race will likely reduce turnout, leading to potential issues of political legitimacy.

If Raisi wins, Iran’s negotiating positions on a return to compliance with the 2015 multilateral Iran nuclear deal will likely remain unchanged.

In late May, the Council of Guardians—Iran’s election candidate vetting body— announced a narrow field of candidates for Iran’s June 18 presidential election. Five out of the seven candidates approved to run are hardliners loyal to Supreme Leader Ali Khamene’i. Two significant moderate contenders were barred, including current Vice President Eshaq Jahangiri. A consensus has emerged among experts that prominent moderates were excluded at the behest of, or to placate Khamene’i, in order to pave the way for an easy victory by Judiciary chairman and Khamene’i ally, Ibrahim Raisi.

Engineering Raisi’s elevation to the presidency appears to represent a regime plan to position him to succeed the nearly 82-year-old Supreme Leader, who has led Iran since 1989. Khamene’i hails from Mashhad, capital of Khorasan Province, and Raisi is the son-in-law of the prominent cleric Ahmad Alamoldhoda, the city’s Friday prayer leader and the guardian of the revered Shrine of Imam Reza. Khamene’i’s support for Raisi, a former state prosecutor, became evident in 2016 when the Supreme Leader appointed him to head the Shrine-centered foundation Astan-e-Qods Razavi, which controls vast tracts of land and hundreds of enterprises throughout Khorasan Province. Iranian dissident groups have sought to discredit Raisi by accusing him of involvement in a 1988 mass execution of political prisoners, and critiques of the obvious favoritism are emerging on social media.

Yet, the regime’s gambit to engineer the rise of Raisi could potentially backfire. Raisi lost the race to the current president Hassan Rouhani in 2017; another loss would almost certainly derail any effort to orchestrate his eventual accession to Supreme Leader. Even if Raisi wins, the narrowing of voter choice in the current candidate field is likely to depress turnout, and thereby tarnish his victory. Reformist voters are unlikely to turn out because their only significant candidate, Jahangiri, was excluded from the race. The one approved reformist candidate, Mohsen Mehralizadeh, was vice president during 2001-5 and recently served as governor of Esfahan Province, but he appears not to have much national appeal. A moderate, although not reformist candidate, Central Bank Governor Abdolnaser Hemmati, also appears to have little national support. The four other candidates include some who have run and lost before, including former nuclear negotiator Sayyid Jalili and former Revolutionary Guard commander Mohsen Reza’i, but experts believe several of the four will drop out of the race before the vote in order to increase Raisi’s chances of winning without a runoff. If no candidate receives more than 50% of the vote, a second round is held between the top two vote-getters. Iran’s regime has historically encouraged a large voter turnout to demonstrate the popularity of its ideology, and a low turnout will undoubtedly provide political ammunition to the regime’s opponents in and outside Iran.

The Biden administration is analyzing the upcoming Iran election in terms of its implication for the ongoing talks in Vienna on a mutual U.S. and Iranian return to full compliance with the 2015 multilateral Iran nuclear agreement. It is unlikely that agreement will be reached by the June 18 Iran vote, but it is widely perceived that the Biden administration wants to complete the talks before Rouhani’s government, with which the nuclear deal was reached in 2015, leaves office in August. Some experts take the view that a hardline successor government will increase Iran’s demands at the negotiating table. However, the Supreme Leader has historically set parameters for major foreign policy initiatives, including the nuclear accord. Khamene’i has clearly stated that Iran would return to its commitments under the agreement if the United States does so as well. Achieving relief from U.S. sanctions remains in the interest of all factions in Iran, and Raisi has given no indication that he would significantly alter Iran’s stance in Vienna, if elected. Raisi’s Foreign Minister selection might be less familiar to the United States than is the well-known Mohammad Javad Zarif, but the basic drivers of Iran’s intent to reach an agreement with the Biden administration in Vienna will not change.