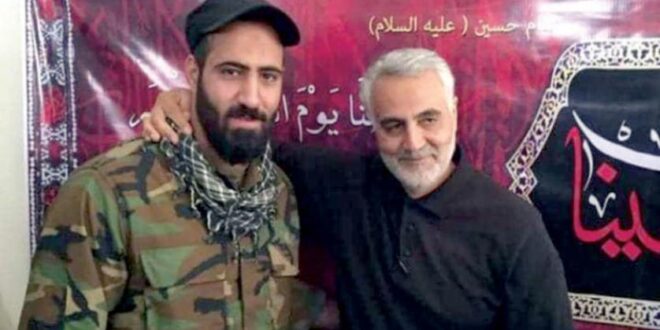 Two members of the Iranian Revolutionary Guards Corps (IRGC) were killed in an ambush set by ISIS in central Syria.

ISIS ambushed a military convoy in the al-Sukhnah area, east of Palmyra city in the eastern countryside of Homs, killing IRGC military adviser Hassan Abdullahzadeh and his companion Mohsen Abbasi.

Iranian media announced the death of both IRGC members on Thursday.

Sources said Abdullahzadeh was the security officer at the Sayyida Zainab region, south of Damascus, then Alboukamal area, and was one of the most prominent Iranian military advisors during the Damascus and Aleppo battles.

The Fars News Agency reported that both militants died in an ambush set up by ISIS in the desert area between Deir-ez-Zor and Palmyra.

A picture published by Mehr News Agency showed Abdullahzadeh with slain Quds Force commander Qassem Soleimani, who was killed in a US strike near Baghdad airport in early 2020.

Syrian opposition media sources had reported about a large-scale attack launched by ISIS on Thursday, targeting a military convoy of seven Iranian militia vehicles in the al-Sukhnah area.

According to the sources, some 25 of the convoy members were killed, including the senior IRGC commanders.

The desert areas east of Homs and Deir-ez-Zor are areas under Iran’s influence, with Alboukamal, on the border with Iraq, as its stronghold.

IRGC forces and Iran-backed militias, including the Fatemiyoun Division, Zainabiyoun Brigade, the Iraqi Hezbollah and the Lebanese Hezbollah, as well as Syrian regime forces and their allied militias, are all deployed in the region.

ISIS cells are present in various hideouts in Syria’s desert and they have been intensifying their attacks there.

Hours after the al-Sukhnah area ambush, the ISIS targeted Fatemiyoun militants on the outskirts of Shoula town in northern Deir-ez-Zor, killing and injuring several militants and detaining others.

In April, the Russian air force launched a military campaign to support regime forces and its allied militias to pursue ISIS cells in the desert.