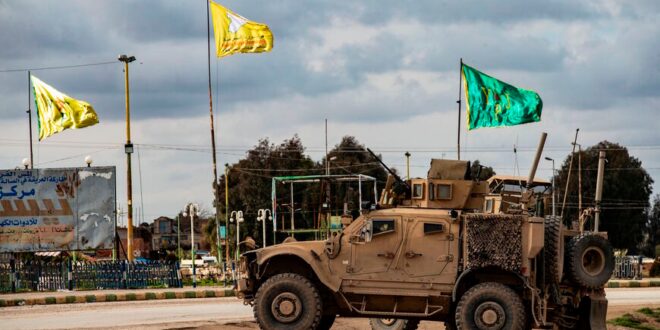 The Syrian Democratic Forces continue to dig tunnels on the demarcation lines with the Turkey-backed opposition factions in northeast Syria, fearing a military operation.

The Kurdish-led Syrian Democratic Forces (SDF) have continued to dig trenches and tunnels in the areas under its control in northeastern Syria for more than three years now, aiming to connect its military posts located along the demarcation lines with the areas held by the Turkish-backed opposition. The digging comes amid concerns over a military operation by the opposition.

The tunnel network stretches from al-Darbasiyah to al-Malikiyah (Derek). Work is conducted by civilians who receive a daily wage of $3 to $5 without medical insurance, as the SDF exploits the poverty and lack of job opportunities in the area. The workers are banned from carrying their mobile phones or wearing watches or any other device to which a tracking device could be connected.

A Kurdish military source who declined to be named told Al-Monitor, “The tunnels are 3 meters [10 feet] deep, with rooms built of reinforced concrete structure every kilometer [0.6 miles]. The construction materials are secured from the US coming from Iraq in supply convoys, provided under the pretext of supporting the development of military bases and countering the Islamic State. All [SDF] military posts are connected through the tunnels, some of which serve for military supply purposes, weapons warehouses, field hospitals and command centers. Kurdish leading figures from Iraq and Turkey are present at headquarters overseeing the tunnels, which makes it easy for them to exit in case of an attack.”

The source added, “The tunnel map includes vital areas in the northern countryside of Hasakah, specifically the northern neighborhoods of Qamishli, and the surrounding areas of Amuda, al-Darbasiyah, al-Malikiyah and Rmelan. The tunnels are passing under these cities and areas to protect them from any potential attack. The plan is to include all areas under our control on the map. Despite the ongoing US promises that these cities would be shielded from any Turkish threats, past experiences have taught us that US promises do not always lead to military victories. The tunnels had achieved their strategic goal in previous battles against the Turkish side, until the [October 2019] agreement was concluded requiring that the Kurdish factions withdraw from the so-called ‘Peace Spring’ areas. We are currently trying to complete the tunnels project in the north of Ain Issa, in the northwestern countryside of Raqqa, fearing any upcoming clashes with the Turkish forces. The area could become a battlefield with Ankara, which wants to connect areas under its control in the north of Raqqa with Manbij in the eastern Aleppo countryside. Such an offensive would isolate and pose a threat to the city of Ayn al-Arab.”

The US-led coalition, which backs the SDF, has not made any public statement on the support it is providing to the SDF’s tunnel network.

Mohammad Fayez al-Asmar, a Turkey-based military analyst and Syrian army colonel defector, told Al-Monitor, “The SDF are aware that their presence is correlated with the US presence in Syria and that the US withdrawal will leave them in the face of a confrontation either with the Syrian regime or with Turkey. That is why they seek to reinforce themselves militarily by building structures, digging shelters and planting mines. The tunnels aim to connect their areas of control to each other, especially those near the demarcation lines with the opposition. Yet these tunnels have proven ineffective in many cases, including during the Turkish Operation Peace Spring, as they failed to affect the course of the military operation. The digging works are merely part of arbitrary security measures in the SDF-held areas.”

He added, “The digging works conducted by the SDF also extend beyond the Syrian border, reaching areas under the Kurdistan Workers Party factions’ control in Sinjar in Iraq. Iraqi border guards arrested some of the workers in the past. [The SDF] is also trying to link the Syrian border to Turkey for the smuggling of weapons, equipment and fighters, which is a hard task given the material needed [for such major works] and geographic difficulties. Also, Turkey possesses advanced technologies and recruits collaborators from within the SDF ranks and local population, allowing Ankara to detect and destroy the tunnels.”

Farmers in the eastern countryside of Qamishli complained that the tunnels and digging affected parts of their lands and yet they cannot object. These tunnels have angered the residents, as millions of dollars have been spent on the construction works at the expense of the region’s poor infrastructure. There have been repeated popular demands that the funds be invested to improve services such as water, electricity and road maintenance. The SDF are funding these tunnels by using revenue from the resources in their areas of control, such as oil and agriculture.

Hussam al-Kass, a human rights activist from Qamishli, told Al-Monitor, “Digging trenches consists of systematic sabotage of the cities and a clear violation of individual property rights given that the tunnels are dug under agricultural lands without paying their owners any compensation, let alone the emitted pollutants and greenhouse emissions, which make the houses there uninhabitable. Also, because of the tunnels, civilian areas would become a potential target [during any upcoming battle] given that they are being used for military purposes and are located on the front lines and border areas. The tunnels often include explosive devices, which would pose a threat to civilians. Some areas continue to suffer war remnants to date.”