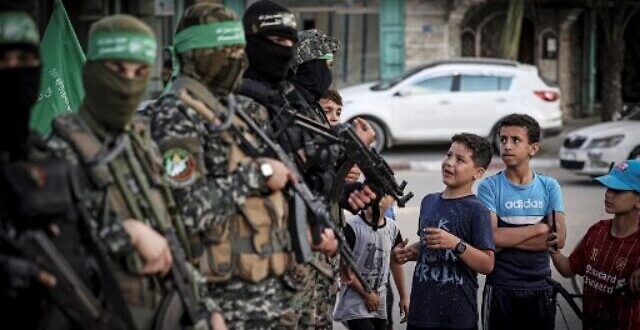 Tuesday’s parade by ultranationalist Jews through Old City will be first major test for new government amid Palestinian threats of violence; US embassy issues travel warning

The Israel Defense Forces was braced for a resurgence in Gaza fighting and a flare-up of clashes across the West Bank on Tuesday amid Palestinian threats of violence if a contentious march goes ahead by Jewish ultranationalists through parts of Jerusalem’s Old City.

The march, rescheduled after the original event on May 10 was stopped short by Hamas rocket fire at Jerusalem, is expected to be the first major test faced by Israel’s new government, which was sworn in on Sunday and gave the go-ahead for the event on Monday.

“The situation in the Palestinian sphere is volatile and we are prepared for a renewed outbreak of fighting,” IDF Chief of Staff Aviv Kohavi said late Monday.

“With respect to the IDF, what was is not what will be,” he said, referring to promises from Israel to take a much tougher stance with the Hamas terror group that rules Gaza and has threatened to launch fresh attacks.

The IDF deployed Iron Dome missile interceptor batteries across the country and sent reinforcements to the West Bank. The Israel Police was also on high alert, deploying more than 2,000 officers across Jerusalem for the event.

The alert came as both Hamas and the Palestinian Authority warned of violence if the march goes ahead.

“The flags march is like an explosive that will cause a new campaign to protect Jerusalem and the Al-Aqsa Mosque to ignite,” Hamas spokesperson Abd al-Latif Qanou said in a statement Monday.

The terror group also called on Palestinians to “confront Israeli settlers” during the march. “The nation and the resistance are behind you in the effort to thwart the plans of occupation,” Qanou said.

Israeli analysts said that it was unlikely Hamas would choose to start firing rockets again after the devastation Gaza experienced after the recent 11-day conflict, but it was likely the group would launch balloons carrying arson and explosive devices into Israel.

“We warn of the dangerous repercussions that may result from the occupying Power’s intention to allow extremist Israeli settlers to carry out the Flag March in occupied Jerusalem tomorrow, a provocation and aggression against our people/ Jerusalem and its sanctities that must end,” Shtayyeh tweeted.

In light of the threats, the US Embassy in Jerusalem issued a ban on its diplomats and their families from the area.

“U.S. government employees and their family members are prohibited from entering Jerusalem’s Old City on Tuesday, June 15. U.S. citizens can take this into account when making their own travel plans,” the embassy said.

The May 10 — Jerusalem Day — attack, which came amid already rising tensions over planned East Jerusalem home evictions and police actions against Muslim rioters on the Temple Mount, touched off 11 days of intense fighting between Israel and Hamas-led terrorists in the Gaza Strip, as well as a rash of lower-level clashes in the West Bank and mob violence between Arabs and Jews inside Israel.

Since the fighting ended, Hamas has repeatedly warned that it could reopen hostilities over developments in Jerusalem, and has responded with increased belligerence to plans for the march, an annual event — held to mark Israel’s 1967 capture of East Jerusalem — during which thousands of nationalist youths parade through the Muslim Quarter of the Old City toward the Western Wall.

In an interview published Monday with Hamas mouthpiece Shehab, top Hamas official Mahmoud al-Zahar warned that his group would respond to any perceived Israeli crime, but also indicated that it would not shoot from the hip.

“We have passed the stage of understanding their crimes against our people or being silent about them,” he said, but added that “our steps must also be disciplined and governed by the public interest, and we must preserve our weapons so that we can fully utilize them” in future fighting.

Hamas’s warnings appeared to hinge on whether or not the march would pass through the Damascus Gate and into the heart of the Muslim Quarter of the Old City.

“Our patience has run out,” the group said in a statement.

For the past three years, Palestinians in the Gaza Strip, mostly linked to Hamas and other terror groups, have launched thousands of balloon-borne incendiary and explosive devices into southern Israel, causing widespread fires and significant damage to agricultural fields, nature reserves, and private property.

New Public Security Minister Omer Barlev said Monday that the march will proceed as scheduled, following a meeting with Israel Police Chief Kobi Shabtai on preparations for the march.

“I am under the impression that the police are well prepared and that a great effort has been made to maintain the delicate fabric of life, and public safety,” Barlev said.

Prior to the meeting, Barlev said that “in a democracy, it is allowed and important to demonstrate within the confines of the law,” adding that “we will operate according to the recommendations of the police.”

Opposing the planned march, the Arab-majority Joint List party issued a letter to Prime Minister Naftali Bennett and Barlev, requesting to have the event canceled entirely. “We warn that this incident will likely reignite the region and will lead to violence and a dangerous escalation,” the party wrote.

The rescheduled event was initially planned for last Thursday, but was postponed to this Tuesday when police refused to authorize its planned route through the Old City’s Damascus Gate entrance and Muslim Quarter.

On Thursday, clashes broke out between East Jerusalem protesters and Israeli police, as far-right lawmaker Itamar Ben Gvir marched to Damascus Gate. Ben Gvir waved an Israeli flag at the site, in what he said was a personal protest after police banned him from parading through the Muslim Quarter to reach the Temple Mount. Ben Gvir had tried to organize his parade as a protest to the postponement of the flag march to this week.

After Ben Gvir’s visit, and amid the rioting that followed, the Hamas military wing issued a statement saying that it was watching developments closely.