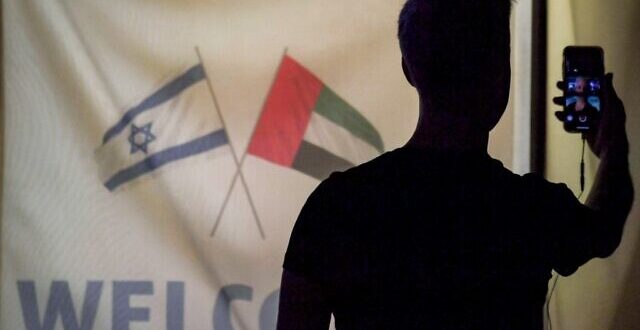 Historic normalization deals between Israel and 4 Arab nations were hallmark of Netanyahu and Trump administrations; FM Lapid indicates eagerness to expand on ties

The United Arab Emirates and Bahrain on Monday welcomed the new Israeli government, indicating that the historic normalization deals forged by former prime minister Benjamin Netanyahu and the Trump administration would flourish beyond the change in leadership.

“His Highness congratulated @yairlapid on his new term as Israel’s new FM,” it said.

“I had the great pleasure of speaking to the Foreign Minister of the United Arab Emirates this evening and I look forward to working with him to build on the warm and unique relations between our two countries for the benefit of our peoples and the entire Middle East,” Lapid said.

“The crown prince expresses his sincere wishes that the newly formed government will enhance development, stability, and peace in the region and the world,” the statement said.

The new government, an unlikely alliance of right-wing, left-wing, centrist, and Islamist parties, was sworn in on Sunday, ending Netanyahu’s 12-year term in office.

During Lapid’s first visit to the Foreign Ministry on Monday, he highlighted his diplomatic priorities, including building on the Abraham Accords that also saw Israel sign deals with Morocco and Sudan.

“Part of our work will of course be to strengthen our presence in the region. Great things have happened this past year. We need to continue the development that started with the Abraham Accords. To work to strengthen the peace with the Gulf States, with Egypt and with Jordan,” Lapid said.

“We will work to sign agreements with more countries in the region and beyond. It’s a process, it won’t happen in a day, but the Foreign Ministry will coordinate those efforts,” he said, indicating a shift in the Israeli approach.

In recent years Israel’s efforts to expand its ties with the Arab world have largely been conducted by the Mossad.

Also Sunday, the Kan public broadcaster reported that talks are underway between Israel, the US, the UAE and Bahrain aimed at holding a ceremony in September to mark the one-year anniversary of the signing of the Abraham Accords.

It was not yet clear where the event will be held or whether the ceremony might be used to announce the addition of another country to the normalization circle.

Kan said the talks were conducted by outgoing foreign minister Gabi Ashkenazi, who was part of the Blue and White party that is also part of the new government, indicating that the efforts will likely continue.

Lapid also specifically highlighted improving ties with neighboring Jordan, praising King Abdullah as “an important strategic ally,” and promising to work with him. Ties between Jerusalem and Amman were frigid at best over the last several years and Abdullah reportedly had little patience for Netanyahu.

But Lapid added that Israel’s relationship with the Palestinians will be a defining factor in the nation’s ties with other countries, likely referring to the sensitivity in the Arab and Muslim world surrounding the ongoing conflict.

“We might not be expecting a final status agreement soon but there is a lot we can do to improve the lives of the Palestinians and the dialogue with them on civil issues,” he said.