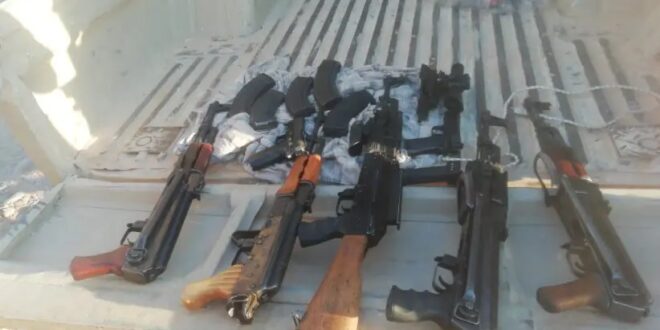 An IDF soldier was moderately wounded during the operation; the cause of his injury is under investigation.

A large weapons exchange on the Jordanian border was thwarted by the IDF and Israel Police on Monday night.

On Monday evening, IDF troops, Israel Police and Border Police apprehended suspects for attempting to smuggle weapons across the Israel-Jordan border in the Arava region.

The security forces identified one suspect as he approached the border on the Israeli side, and fired in his direction in order to prevent him from reaching the border.

During the operation, an IDF reserve soldier was moderately injured and was evacuated from the scene to a hospital. The reason for his injury is under investigation. The arrested suspect has also been transferred to hospital to receive treatment.

This is the second weapon smuggling attempt that has been thwarted by the IDF recently. On Saturday last week, two suspects were arrested and taken in for further questioning after Israeli forces discovered nine pistols, a Kalashnikov rifle and an M16 rifle in their possession in the northern part of the Jordan Valley.

Additionally, in recent months the IDF has thwarted over 1,000 attempts to smuggle items that could potentially be used for terrorism into Gaza via the postal system.

In a Tuesday statement, Israeli security forces announced that they had seized another small cache of weapons attempting to cross the Jordanian border.

Three arms smugglers were apprehended by a cooperative unit of Border Police, the IDF and Israel Police Air Force, after trying to escape capture along the border.

Upon being searched, ten Kalashnikov rifles, five sniper rifles, two M16 assault rifles and four pistols were seized from the smugglers, preventing the weapons from crossing into Israel.

Post Views: 57
Previous Palestinian Authority perturbed about Egypt-Hamas rapprochement
Next Guardian of the Walls is over, but Hamas still sets the rules – analysis