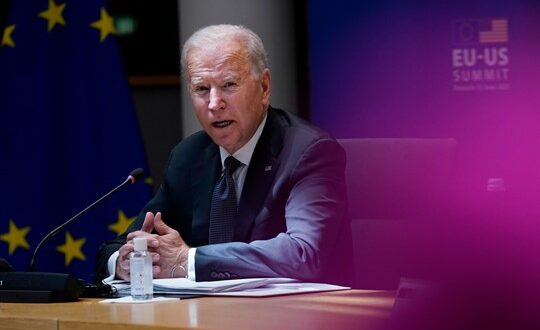 What does President Joe Biden’s first foray into international summitry reveal to us about the quality of his vision for America’s place in the world? As might be expected, some of the priorities he pursued in meetings this week with the leaders of the G-7, NATO and the European Union are timely and well-founded.

Think reassuring America’s oldest allies after the persistent disruption of the Trump years. Think building consensus around a collective response to increasingly aggressive Russian behavior, whether via cyberattacks emanating from that country or the menace Moscow poses to Ukraine or the Baltic states. In the more purely economic realm, think suspending the mutually harmful tariff war with the EU that began years ago over aircraft subsidies to Boeing and Airbus. Or efforts to harmonize taxation policies to make it harder for gigantic multinational companies like Google and Amazon, to name just two, to game widely varying fiscal laws around the world in order to shelter their income.

Some of Biden’s aims, meanwhile, seem misguided—or at least insufficiently thought through. As menacing as Moscow’s behavior can appear, a country as large as Russia, even locked in economic stagnation and population decline, will not soon abandon its pride or cease pretending to a major role in the world. In this light, efforts to strengthen NATO that are not accompanied by gestures aimed at extending a hand to Russia merely seem destined to guarantee continued and potentially dangerous great-power friction, both in Europe and elsewhere.

The biggest Biden misfire so far, however, involves China. Biden is right to highlight the growing systemic tensions between China and leading Western nations, whether over military competition and international security or territorial claims and human rights. Where his administration already seems to be going wrong, though, is in the idea that competing with China should mean trying to match it in the areas of its greatest strength—in this case, by assigning a high priority to the construction of infrastructure around the world. Surprisingly but misguidedly, Biden got Europeans to sign on to a scheme that bears his personal imprint, branded Build Back Better, in order to compete with China’s enormous, if somewhat opaque and hard to define Belt and Road Initiative, the signature global engagement mechanism of Xi Jinping’s tenure.

There is no doubt that the so-called developing world has a huge deficit in terms of infrastructure needs that will persist for decades to come. There is also little doubt that the West has largely abandoned this field to China so far this century, or that it should do more to help developing countries meet their infrastructure needs. Western countries should also be more creative in terms of both financing and accounting for the ecological impact of these development projects, particularly when it comes to climate change.

So wherein lies the problem? China has heavily emphasized infrastructure development as a cornerstone of its international engagement based on two fundamentals that the West does not share. First, in recent decades, the country has been experiencing the greatest domestic construction boom the world has ever seen. I was amazed to witness an early phase of this firsthand, arriving in Shanghai as a correspondent in 2003, when that city had a single subway line, and departing China six years later, by which time Shanghai boasted more than 20 of them and still counting. As impressive as this seemed, it turned out to be merely a small preview of what the government would soon roll out in dozens of cities across China. Well beyond urban subways, this build-out came to include all manner of connective tissue between these cities, from a new highway system bigger than America’s to the now-famous high-speed trains that crisscross China to scores of modern airports.

The latest of these railroads gives a flavor for China’s construction prowess and the grandeur of its ambitions in infrastructure: It runs 270 miles through the Himalayas, at Mount Everest base-camp altitudes and mostly through tunnels.

The second factor boosting China’s position in global infrastructure development, after its unparalleled economies of scale in the construction sector, is that during its long economic takeoff, the country has accumulated by far the world’s largest pool of national savings—so large, in fact, that China faces challenges in smartly and safely investing it. American Treasury bonds have long been the main vehicle for those savings, but for a mountain of cash this high, even Treasuries are not enough, and foreign infrastructure projects have become an attractive secondary destination for earning returns by exporting capital. The West, with its mature economies, aging populations and high social security costs—all of which will hit China, too, starting in another decade or so—has no comparable pool of capital to export, nor even the need.

So if not in infrastructure, where should Biden and America’s Western allies compete instead? Three areas stand out where the rich countries of the world are wasting their advantages and seriously underperforming. The first of these is public health. The most obvious priority here should be the battle against the coronavirus pandemic, in which the United States and Europe seem strangely reticent, even as they brandish new initiatives that they would like to be seen as generous. In recent days, the Biden administration has pledged 500 million doses of vaccine for countries in need, and together with European pledges, the West is now offering a slow rollout just shy of a billion shots.

Even if the American pledge stands for now as the largest made by any nation, this is frankly underwhelming. It is as if someone forgot to deliver the memo that the world population stands just shy of 8 billion people. Early in the pandemic, Paul Romer, the American Nobel laureate in economics, argued that if the United States were to spend, say, $100 billion to quickly and repeatedly test the entire population, it could quickly contain the spread of the virus. But his proposal for halting the crisis in its tracks was tragically not heeded. Instead, the U.S. was cost-averse and took forever to commit to testing on a sufficient scale, while never developing a truly national plan, and this caused repeated shutdowns and repeated disruptions to the economy that ended up costing trillions. Later, Romer and other economists argued the government should pay Americans as much as $1,000 each to get vaccinated. The logic here was the same, and it, too, was ignored.

The point here is that the West is now making the same mistake, being pound foolish with its incrementalism in stepping up the supply of cheap or free vaccines to the developing world. And the costs for this will eventually be similarly high, whether in human terms in poor countries, in persistent disruption to the global economy or in the emergence of deeply resistant new strains of the virus. It is also a surefire way to squander global goodwill. News this week that another Western vaccine from the American company Novavax appears highly effective and potentially cheap points to a way of addressing this foolish conservatism. Novavax, which I wrote about months ago, says it will soon be able to produce 150 million doses a month. Everything possible should be done to realize this target and, if possible, greatly surpass it, and these doses should be made available—along with whatever incremental increases can be squeezed out of the existing major players—to countries in need. While it does this, the Biden administration should be pushing to help create vaccine production facilities on every continent.

While others focus on physical monuments to their generosity, Biden’s next goal should be leading the West toward the improvement much more broadly of public health services in developing countries, from fighting infectious diseases like malaria, which still kills more than 400,000 people every year, to maternal and infant preventive care.

Alongside this, the West should be doing much more to push another nonconfrontational area where it enjoys a relative competitive advantage over China: education. One explicit goal should be eliminating illiteracy wherever it is prevalent, which would especially improve the condition of women, among whom this problem is disproportionately found.

At the other end of the spectrum, Western countries should help developing nations extend higher education to their populations by increasing the number of universities they field and greatly improving their quality. This would require deep cooperation, as opposed to dictation, and would drive innovation, especially in online technologies, which would be good for all concerned.

One of the greatest challenges of the next two or three decades involves a topic I have written about frequently: demographics. Population growth in relatively poor countries, especially in Africa, is set to explode, but gets hardly any high-level attention in international politics. The two things we know work best to bring down fertility rates are precisely the two things I’ve focused on in this column: public health and education. Improvements in these areas also offer developing countries the best chance of raising national incomes, and the lower population growth rates achieved through noncoercive means like these will be key to any program aimed at limiting climate change, the third area ripe for much more meaningful cooperation. Here, there are win-win solutions for everyone, including China, which should be invited in as a full partner, as the U.S. only looks stronger when it invites China to cooperate.

Moreover, American self-confidence should mean taking the high road wherever possible. Doing so could also lower the potential for conflict, and when China turns up its nose on those offers of cooperation, the U.S. looks even better.