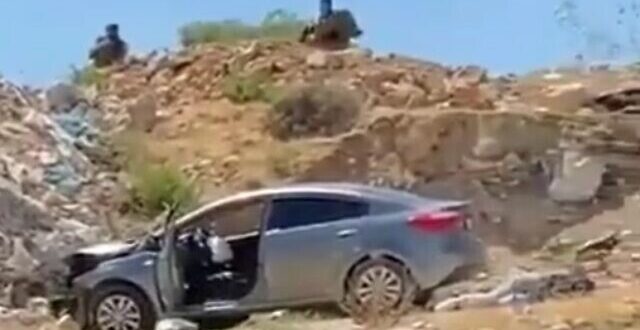 No Israeli casualties as female alleged assailant targets soldiers northeast of Jerusalem; attacker reportedly wrote on Facebook: ‘I don’t have much time left in life’

A female Palestinian assailant attempted to commit a car-ramming and stabbing attack Wednesday in the central West Bank before being shot, the Israel Defense Forces said in a statement. She was reportedly killed.

The incident occurred near the Palestinian town of Hizme, northeast of Jerusalem.

“A terrorist tried to ram soldiers near Hizme and then attempted to carry out a stabbing,” the IDF said in a statement.

The military noted that there were no Israeli casualties and that the attacker had been “neutralized.”

The Palestinian Authority health ministry said the woman died of her wounds.

Official Palestinian Authority news agency WAFA identified the woman as Mai Afaneh, 28, from the town of Abu Dis, which is east of Jerusalem.

Reports said Afaneh had written on Facebook hours before the attack: “I don’t have much time left in life.”

The incident occurred amid increasingly frequent attacks in the West Bank.

Afaneh, who was 28, left an inconclusive trail of clues behind her. She had suffered some health problems. There were other distraught Facebook posts about Palestinians killed by Israel. But relatives said she had no reason or ability to carry out an attack.

She had earned her doctorate in psychology in Jordan, was happily teaching at a local university and had a good family life with her husband and 5-year-old daughter, relatives said.

“She was not politically affiliated. All she cared about was her studies and helping her family and husband,” said her father, Khaled Afaneh.

He said the previous night she was laughing and talkative before dropping off her daughter to spend the night with the grandparents. He said she needed colon surgery, had just gotten out of the hospital and was very weak.

“Even if she really wanted to attack, they could easily stop her. There was no justification to kill her,” he said, speaking at the family’s home in Abu Dis, a town on the eastern outskirts of Jerusalem.

On Saturday, a Palestinian woman was shot dead after she ran at guards manning a West Bank crossing brandishing a knife and ignored multiple calls to halt, police said at the time.

The day before that, a Palestinian teen was killed during clashes with Israel Defense Force soldiers in the northern West Bank.

Last Thursday, two officers in the Palestinian Authority’s security service were shot dead in an exchange of fire with Israeli forces operating in the northern West Bank. A third Palestinian, a suspected member of the Islamic Jihad terror group who was the target of an Israeli arrest operation, was also killed in the firefight. Reports indicated two Palestinian Military Intelligence officers on guard duty noticed the arrest operation taking place, with the undercover Israeli forces operating out of a civilian vehicle, and chose to engage, likely not realizing that it was an Israeli raid.

Post Views: 58
Previous With Israel-Hamas probe on agenda, Karim Khan sworn in as ICC chief prosecutor
Next Leave Infrastructure to China and Compete Where the West Has More to Offer