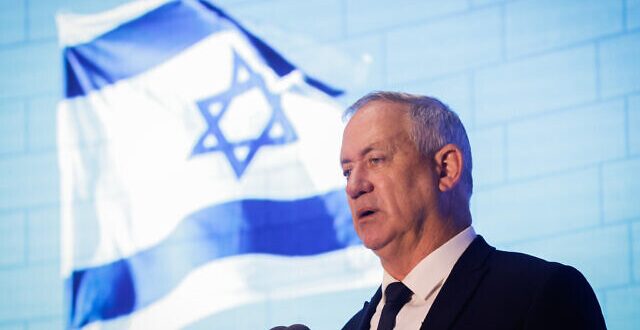 ‘We are keeping our eyes open, maintaining the routine, while remaining prepared,’ says defense minister at event marking 15 years from Second Lebanon War

Speaking at a memorial ceremony at Mount Herzl marking 15 years since the outbreak of the Second Lebanon War, Gantz proclaimed that the IDF is “prepared to engage our full capacity.”

“In future campaigns, or, God forbid, in war, if we need to get into enemy territory, ground troops, both in regular and reserve duty, will constitute a central component of the fighting,” Gantz said. “We will use them if it becomes necessary.”

The defense minister noted that his statement applies to a potential future conflict along the border with Lebanon or anywhere else.

During the 11 days of conflict between Israel and Hamas in Gaza last month, Israeli ground troops did not enter the Strip, although ground forces did fire on Hamas targets from just outside the territory.

“We are aware of the attempts to breach the calm on our borders, and we are keeping our eyes open, maintaining the routine, while remaining prepared for broader crisis response,” Gantz added.

President Reuven Rivlin also addressed the event, which is expected to be his final memorial ceremony before his term ends next month.

“We appreciate and cherish the peace, but we are not complacent,” he said. “We know the threat is still serious. And the last few weeks have shown us again how ‘quiet’ is a relative and fragile term.”

Rivlin noted that the IDF is fully aware of Hezbollah’s efforts “to arm themselves with weapons whose sole purpose is to strike at the civilian home front of the State of Israel” and reiterated that Israel “will not allow Iran to establish itself in Lebanon.”

“The State of Israel will respond decisively to Iranian aggression,” Rivlin added. “We have no war or dispute of any kind with the people of Lebanon… we know that many Lebanese citizens are forcibly held captive by the Iranian agenda that threatens and casts a heavy shadow over their future. We want to be good neighbors… but we will continue to extract a heavy price from Lebanon for every attack that comes out of its territory.”

Gantz thanked Rivlin for his longstanding support for bereaved families and his unflagging attendance at IDF memorial ceremonies throughout his tenure.

“Time after time, you have shown up at these ceremonies to support bereaved families,” Gantz said. “On my own behalf, and on behalf of bereaved families, and the IDF and defense establishment’s wounded veterans, I thank you.”

During the 33-day war in 2006, 164 Israelis were killed — 119 soldiers and 45 civilians. Approximately 4,000 rockets were fired from Southern Lebanon toward Israel during the fighting.

Post Views: 75
Previous After Kohavi meeting, US reaffirms commitment to not let Iran get nukes
Next Egypt Maneuvers Back to Center Stage