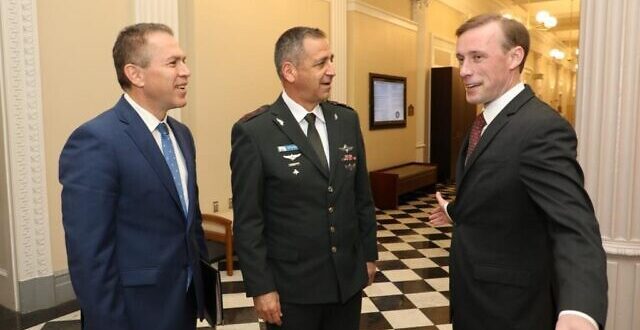 After Kohavi meeting, US reaffirms commitment to not let Iran get nukes

US National Security Adviser Jake Sullivan told IDF Chief of Staff Aviv Kohavi that US President Joe Biden has a “commitment to ensuring that Iran never gets a nuclear weapon,” according to the White House.

Sullivan and Kohavi met in Washington on Wednesday alongside Israeli Ambassador to the US and UN Gilad Erdan and discussed “the challenges to security and stability in the Middle East, including the threat posed by Iran’s malign activities in the region,” the White House said in a statement.

Sullivan “reaffirmed President Biden’s unwavering support for Israel’s security and commitment to continuing to strengthen the defense partnership between the two countries.”

Nevertheless, Kohavi railed against the United States plan to rejoin the 2015 Iran nuclear deal during the meeting with Sullivan and other top American defense officials, according to the IDF.

Kohavi reiterated the “failures of the current nuclear deal” and attempted to convince the American officials of alternative methods of preventing Iran from obtaining an atomic weapon, the military said.

“Throughout the day, the chief of staff has presented possible ways to prevent Iran from obtaining military nuclear capabilities during his meetings,” the IDF said in a statement.

US National Security Council Coordinator for the Middle East and North Africa Brett McGurk and Special Assistant to the President Cara Abercrombie also took part in the meeting with Sullivan, according to the IDF.

Kohavi’s remarks came as the US and Iran — through intermediaries — have been negotiating a mutual return to the 2015 nuclear deal, known formally as the Joint Comprehensive Plan of Action. Former US president Donald Trump abrogated the agreement in 2018, putting in place a crushing sanctions regime, which prompted Iran to also abandon the accord a year later, enriching more uranium and at greater levels of purity than was permitted under the deal, as well as taking part in other forms of proscribed nuclear research.

Israel staunchly opposes Biden’s plan to reenter the JCPOA, which he has said he’s prepared to do provided Iran returns to compliance with the agreement.

The Biden administration has said it plans to use the JCPOA as a starting-off point for brokering a “longer and stronger” nuclear deal, though critics — including those in Israel — say that once the US eases the sanctions in place on Iran and Iranian officials as it returns to the JCPOA, Tehran will no longer have an incentive to negotiate.

Several delegations of Israeli officials, including then-Mossad chief Yossi Cohen and National Security Adviser Meir Ben-Shabbat, have traveled to the US in recent months in an effort to dissuade the Biden administration from reentering the agreement.

In the past, US officials have said that the concerns raised by Israel during these talks will not change the White House’s plans.

Kohavi landed in Washington on Sunday and has met with a number of top American defense officials, including US Secretary of Defense Lloyd Austin, Chairman of the Joint Chiefs of Staff Mark Milley, US Central Command chief Kenneth McKenzie and others. He is due to return to Israel on Friday, according to the military, and was scheduled to meet with CIA head William Burns and the US Director of National Intelligence Avril Haines.

In addition to discussing Iran’s nuclear program, the IDF chief shared Israeli assessments of the Islamic Republic’s military expansionism in the Middle East, the IDF said.