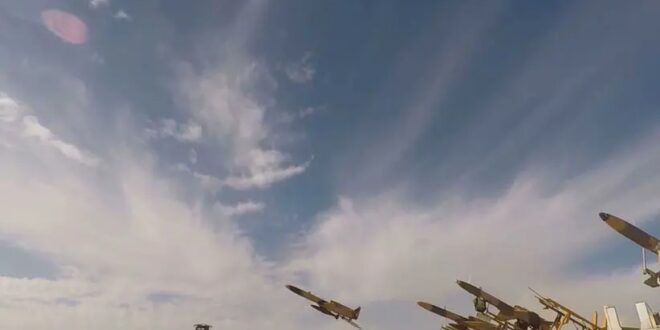 Confronting its own claims that it is suffering sabotage, attacks by remote control weapons and now drones, must leave the Iranian regime concerned about its internal security.

Iranian sources said on Wednesday that a facility in Karaj was targeted by a quadcopter-style drone. Iran says it shot down the drone.

The alleged target was a complex run by Tehran’s Atomic Energy Organization. The Jerusalem Post reported that the sabotage caused major damage. The New York Times also reported that the attack targeted production of centrifuges.
Several aspects to this incident that are of interest. One, is that Iran admitted it happened but downplayed it or claimed to have foiled the attack. Second, are the reports that the site was making advanced centrifuges. Third, is the use of a drone – not just any drone, a quadcopter. The use of a quadcopter, which usually has a short range and can remain airborne for a relatively short time, has led reports to conclude that the drone took off from inside Iran.

While many popular, commercially available quadcopters, like the DJI Mavic, can fly for only around half an hour, and don’t have a long range, some companies have achieved longer ranges using gas/electric hybrids. However, in general, quadcopters don’t fly very far, can’t carry much of a payload, such as a bomb so would not be very effective for sabotage or major destructive operations.

That is why militaries around the world, including Iran, have opted for kamikaze drones, or loitering munitions, which are essentially a cruise missile that can fly around until it finds its target and destroys it. Some of these have long ranges. Iran has pioneered several versions that it exported to the Houthis in Yemen and which Hamas has copied and used.

So, this leaves the report with many questions about why Iran would admit it was being harassed by a drone apparently flown from inside the country. It’s not the first time Tehran has admitted that “interesting” and “advanced” weapons might have been smuggled into the Islamic Republic to carry out attacks. In November 2020, according to a BBC report, Iran said it “believes Israel and an exiled opposition group used a remote-control weapon to shoot deal top nuclear scientist Mohsen Fakhrizadeh.”

Iran has also said its Natanz facility sabotaged in April 2021. It also claimed the same facility was damaged by sabotage in 2020. Tehran appears to be admitting that many of its sensitive nuclear facilities are at risk and are being targeted by increasingly complex means. Iran’s only nuclear power plant was shut down several days ago as well.

The country appears unable to guard against diverse and complex threats. While it claimed to stop the recent drone attack, it’s not entirely clear the drone itself was the main weapon used. Quadcopters can also be used for other things, such as surveillance. The regime hasn’t yet shown photos of the quadcopter – and it’s not entirely clear how it would have shot it down or jammed it.

Iran has increased investment in air defense and radar. However, quadcopters are so small that it may not possess the ability to interdict them. Confronting its own claims that it is suffering sabotage, attacks by remote control weapons, and now drones, must leave the Iranian regime concerned about its internal security.

The regime has exported attacks abroad. For instance, it has sent drones and ballistic missiles to Iraq for use by pro-Iran militias. In February 2018, it flew a drone into Israeli airspace from T-4 base in Syria, and it was accused of being behind another drone that flew into Israeli airspace in May, either from Iraq or Syria.

That is the usual Iranian modus operandi: to export threats. Admitting that it increasingly faces internal threats must serve some purpose for the regime. Blaming drones and complex weapons, neither of which it showcases to media, may be preferable to admitting its facilities are being harmed by other embarrassing methods.

Post Views: 46
Previous Pompeo to ‘Post’: Iran unwound nuclear deal in a matter of months
Next What might be the real target of the sabotage in Iran? – analysis