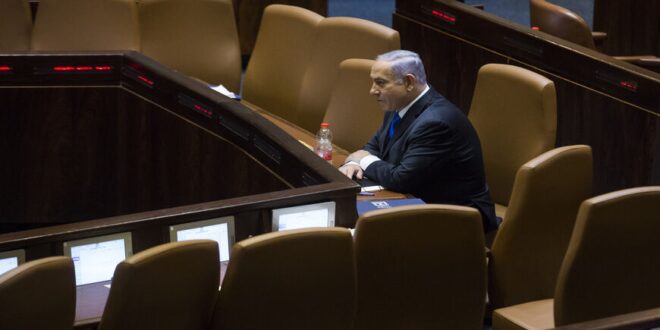 Up until June 28, Benjamin Netanyahu’s official website referred to him as prime minister of Israel. More than two weeks after being removed from office, former Prime Minister Netanyahu still finds it hard to believe he has been ousted, and adapt to a changed reality. His Likud party’s lawmakers still call him “prime minister,” and all parties of the Likud-led opposition have been instructed clearly to reject the legitimacy of the new government, to ignore the regime change, to dub Prime Minister Naftali Bennett a “conman” and the government he leads “the greatest political fraud in the history of the state.” They act as if they still control the Knesset, refusing to accept the voters’ verdict and the June 13 swearing-in of the government that replaced theirs.

Netanyahu is having trouble bidding farewell to the power, authority and perks of office. His family continues to reside in the official prime minister’s residence in Jerusalem, after Bennett agreed to delay his move there for a few weeks. Netanyahu is now trying to force the Likud to cover his private expenses, much like his years in government. He does not have a credit card, he only just got a cellphone, he has not driven a car in ages and he has no inkling of how ordinary Israelis manage their daily lives. Evidently, he sees no reason to adapt. Instead, he is running around the country, walking barefoot along the beach in the town of Bat Yam, drawing attention and posing for selfies, basking in the love of his many supporters who also continue to refer to him as “prime minister.” This is one of the toughest hangovers in the annals of Israel’s history.

A change of government in the United States is far simpler: The president boards the presidential helicopter or Air Force One, which flies him to civilian life, where he busies himself building the presidential library. In Israel, the former prime minister is now the leader of the Knesset opposition and is going nowhere. On the contrary. He has an excess of energy, he is acting like a man possessed, hanging on to the remnants of his past glory and trying to fuel his popularity and his standing as a leader only temporarily out of office.

It is hard to bring down a government in Israel. The Bennett government will fall automatically if it fails to push through the state budget in the coming months, an unlikely outcome barring exceptional developments. Netanyahu, his supporters and his Knesset members will surely realize at some point that they are not returning to power anytime soon. After 12 years, the Likud is not used to political exile. It has become accustomed to jobs, power and perks. Most Knesset members of the Likud and of its allied ultra-Orthodox parties have never served in the opposition bloc. The only political reality they know is one of abundant funding, influence and decision-making. They are in for a tough time.

Netanyahu is trying to entertain hopes that the strange, complex unity government under Bennett and his Alternate Prime Minister Yair Lapid will crash quickly. He is fighting it on all fronts. His prospects are nonexistent, but Netanyahu never gives up. He is trying to drive a wedge between Bennett and the Biden administration (as previously reported here), and has no qualms about clashing with the government even on security-related matters so dear to his heart. That includes, for example, his refusal to approve the extension of a temporary order preventing family unification between non-Israeli Palestinians and Palestinian citizens of Israel. The Knesset has renewed the order annually since it was first adopted under the Likud in 2003, during the second Palestinian uprising (intifada). The order, which expires July 6, is designed to prevent mass migration of Palestinians from the West Bank into Israel and penetration by hostile elements and even terrorists.

The annual renewal request was presented to the Knesset by Netanyahu himself, just days before he was replaced as prime minister. Now he and his Likud are doing all they can to prevent its Knesset approval. Ra’am, the Islamist faction that has become the first Arab political party to join an Israeli government, also opposes the measure. Without its support, the coalition will require opposition votes to push it through.

Netanyahu is playing this drama for all it’s worth. He is violating what has been a sacrosanct principle of Zionist opposition parties throughout the decades of providing the government with a safety net on issues of national security. But these days, Netanyahu cares more about his personal political security than Israel’s national security. He only wants one thing — to embarrass the Bennett-Lapid government, to prove his contention that it is anti-Zionist and dangerous to Israel, to undermine its foundations and turn its diverse components against each other. That is his sole objective.

As of now, the opposition is mounting a determined campaign against every piece of proposed coalition legislation. The coalition’s hairbreadth Knesset majority (of one vote) forces its Knesset and government members to spend long days and nights in the chamber, sometimes pulling all-nighters (as was the case on the night of June 28-29) to avoid losing votes to the opposition. It remains to be seen how long the Likud and its allies can keep up this frenetic pace of challenging the coalition at every turn.

Bennett and Lapid, on the other hand, have decided to settle for low-key criticism of Netanyahu in order to present an image of calm and highlight the difference between their responsible government and Netanyahu’s loss of inhibitions. They are presenting cool dignity and self-confidence. For now, it’s going well for them. Netanyahu appears confused and clueless rather than a confident national leader on short leave.

Netanyahu is hanging on to a scintilla of hope regarding Defense Minister Benny Gantz, head of the Blue and White party. It is no secret that Gantz is unhappy with the power-sharing deal between Bennett and Lapid. Bennett’s Yamina party only has six Knesset seats (of 120), whereas Blue and White has eight. Netanyahu’s envoys keep putting out feelers to see if he can be persuaded to jump ship and go back to his 2020 power-sharing deal with Netanyahu. This time, under the proposed arrangement, Gantz would go first and serve as prime minister for the first three years of the government’s term, followed by one year for Netanyahu.

Neither Gantz nor anyone else is likely to believe Netanyahu who went back on all his previous political promises and burned all his bridges, cheating his partners — like Gantz at the time — and defrauding all those who trusted him over the years. But Netanyahu keeps trying. He always does.

How long his party’s rank and file keep up their support is anyone’s guess. As long as Netanyahu delivered and brought the Likud to power time after time, his hold was assured, but he has now distanced the party from the throne. The asset has become an encumbrance. Senior Likud members have successfully blocked his plan to hold swift primaries in order to lock his hold on the party’s chair. They are organizing behind his back. He can no longer easily push all his whims through the Likud institutions. Chinks have appeared in his one-man rule, the magic has dissipated. Barring a dramatic development fatally undermining the Bennett-Lapid government, Netanyahu’s political future appears murkier than ever.