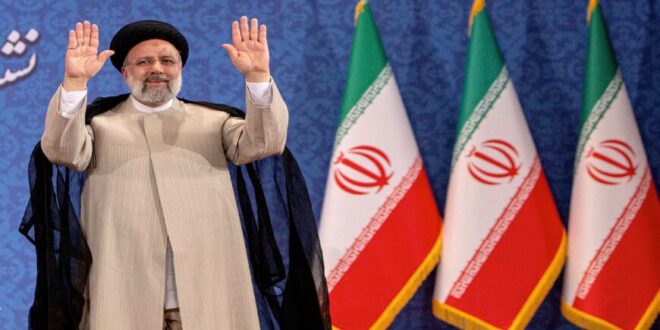 The election of Ebrahim Raisi as president of Iran reflects a more revolutionary turn under the direction of Iran’s Supreme Leader Ayatollah Ali Khamenei.

Nothing came unexpectedly in the Iranian presidential race. While Ebrahim Raisi’s election was a done deal, the only questions were about the size of voter turnout and who would vote for him. But Raisi’s ascent to power wasn’t to happen without open support from the establishment as a whole, the Principlists as a political current and the so-called “Hezbollahis” — a rising revolutionary power that functioned under the mantle of the Principlists for the past two decades and seems now ready to announce itself as a new and main player in the Iranian political arena.

“With the election of Sayed Ebrahim Raisi, we’ll see a much more revolutionary Iran than before,” a source close to the Raisi campaign told Al-Monitor, using an honorific common in Iran. The source, who spoke on condition of anonymity, said Raisi wasn’t ever a Principlist, stressing the president-elect himself said this when he ran for office in 2017 and in the last election reiterated he’s not running under the Principlist flag. The source added, “The Iranian political scene will be restructured; a new political current is going to rise, neither Reformist nor Principlist. Rather, a revolutionary Hezbollahi.”

The Hezbollahis are known to be very loyal to Iran’s supreme leader, Ayatollah Ali Khamenei, and they are the cornerstone of the “Second Phase of the Islamic Revolution” he announced back in February 2019. The announcement, which came on the 40th anniversary of the revolution, seemed more of a manifesto that’s aimed at highlighting the final step of the transition from Khomeinism (in reference to the founder of the Islamic Republic, Imam Ruhollah Khomeini) to Khameneism, where Khamenei is seen by his loyal followers in Iran and away not only as the supreme leader of the Islamic Republic but also as the leader of the continuing revolution.

“The younger Hezbollahis were trained very much to be loyal to Khamenei and his vision of the Islamic Republic,” said Narges Bajoghli, author of “Iran Reframed: Anxieties of Power in the Islamic Republic,” in an interview with Al-Monitor. She said while we can say we’re seeing Khamenei’s vision usurp Khomeini’s, “I’d say we need to be cautious not to read too much into this yet, as these younger Hezbollahis are not blind ideologues.” Bajoghli said there were “huge debates and anger expressed among some of these elements after the Guardian Council’s announcement of who it had vetted for the elections. So, while they follow Khamenei, they are not shy to express their disagreements publicly and challenge their elders. This, I think, will be the harder tension for the upper echelons of conservatives to deal with during Raisi’s tenure.”

Over the past two years, Khamenei introduced a new concept he suggested would be the solution to Iran’s problem: a government led by young Hezbollahis. The concept attracted a lot of debates inside and outside of Iran, and just before the election in a May 13 speech, he stressed, “If such a government comes to power, the problems will be solved in a reasonable time. … Today, the country has much better conditions in terms of cultivating a faithful, revolutionary, professional and confident manpower than in the first decade of the revolution.”

The use of “Hezbollah” as a feature and not only a title is because Khamenei and his followers see “Hezbollah” as a line of thought and an umbrella for groups and factions inside and outside of Iran who share the same belief in the “Velaya,” or the guardianship as a concept. Therefore, the Hezbollahis of Lebanon and those of Iran, along with the ones of Iraq, Yemen, Afghanistan, Pakistan and anywhere there’s such an organic extension of the velayat-e faqih doctrine, despite the cultural differences, could all be seen as members of the transnational nation of Hezbollah, or Ummat Hezbollah, that today is led by Khamenei and after his death will be led by a successor who should follow his footsteps.

The new narrative has been pushed over the past years by elements of the Hezbollahi camp who were preparing for the election of Raisi, some believe. But Narges Bajoghli argues that the effort to push this narrative has been in the process for two decades now, mainly in the space of media and filmmaking. “It’s been a two-decadeslong process of trial and error that received increased funding, especially from certain elements of the Islamic Revolutionary Guard Corps (IRGC),” she suggested.

Bajoghli said that since the 2009 Green Movement uprising, “These factions have trained their younger members in media-making and have given them the resources and platforms to create ‘cooler’ and more relevant content; there’s been a concerted effort to perfect and professionalize their ability to solidify and distribute their narrative of the Islamic Republic since the rise of the Reform movement back in 1997.”

She explained that with “the rise of the Green Movement in 2009, they understood they had lost a great deal of popular support, and so one of their main takeaways was to remain ‘behind the scenes’ and create dissimulation tactics, whereby the audience couldn’t tell they were making the media content. In the past decade, they’ve gotten even more sophisticated (with increased IRGC funding) and now create high-production value spy thriller television series and films that garner large audiences for their entertainment value.”

What Bajoghli is suggesting is that this whole process, which started shortly after the election of Mohammad Khatami in 1997 and resulted in 2021 in paving the way for Raisi to become the country’s new president, had a lot of narrative building and media work in it. The theme of the latest media productions, she said, was that Iran is under threat from outside and inside, and only through the power and cunning of the IRGC and revolutionary loyalists can it overcome these attempts at destabilizing the country. However, she argued that “the narratives don’t always work, and indeed in times of heightened tension internally, as during the anger at the establishment with the violent crackdown of the November 2019 protests or the downing of the Ukrainian airliner in January 2020, there are deep gaps. Nonetheless, these Hezbollah elements benefit from having deep financial resources and the communications arms of the state at their disposal.”

Raisi’s election is the tip of the iceberg, as the path would show, and this is not a secret. The effort exerted by several institutions within the establishment to secure a smooth presidential election, with a turnout that’s not very low, bared a clear message that this time there’s no room for trial and error.

“I think Mr. Raisi intends to go back to the ideal of the revolution, which is stressed more on social justice, the deprived, those left behind,” explained Tehran University professor Mohammad Marandi, as he spoke to Al-Monitor. Marandi said that while in the first decade of the revolution there was a lot of effort put into dealing with poverty and ending the injustices that existed in society, “Later, the whole process slowed down, and the gradual liberalization of the Iranian economy led to a gradual increase in the gap between rich and poor, and now I think many in Iran feel disillusioned by this process, whereas the country is becoming less fair … [at the expense] of those people who are more vulnerable in society who aren’t attended to.”

That being said, it’s possible to foresee that while the decision to engage with the West will not change, the tone, expectations and ceiling are going to see a clear shift. As of the day Raisi’s new government gets into office, there’ll be one voice coming out of Tehran. A source close to Raisi’s campaign explained, “This administration will only promise what it can do; what you see is what you get. If the president says no, he’s not meeting US President Joe Biden, that’s because he’s not going to meet him. If he says he’s not going to [attend] talks about our ballistic missile program, well that’s also because he’s not going to promise to get there one day in the future when he isn’t.”