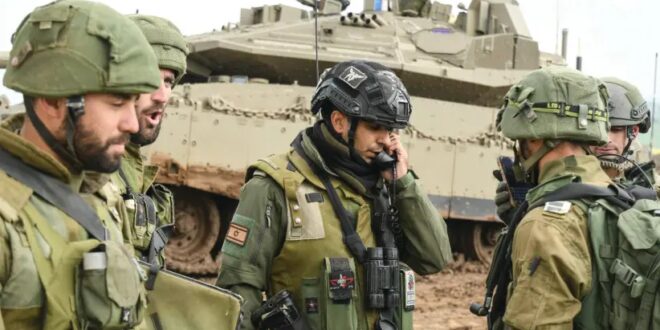 MILITARY AFFAIRS: A month and a half after Guardian of the Walls, it’s back to ‘normal’ for the IDF on the Gaza border.

A month and a half after Operation Guardian of the Walls, the border between Israel and Gaza is quiet but tense.

The stores and roads are open once again, and bomb shelters in the South are no longer where residents spend the majority of the day. Schools and day camps are also once again taking children to southern Israel for excursions.

The Erez and Kerem Shalom crossings have also reopened, with fuel and humanitarian aid passing through into the Hamas-run blockaded coastal enclave.

But the IDF and Hamas are already preparing for the next round of fighting, something many believe is not far off.
“The atmosphere is quiet but tense,” Lt.-Col. Dori Saar, commander of the 53rd Armored Battalion, told The Jerusalem Post from atop the observation post at the IDF’s maritime barrier with Gaza.

In the distance was Gaza City, and several hundred meters away dozens of Gazans were in the sea, finding respite from the summer sun.

“We see that Hamas is not trying to challenge us at the moment, but we are always watching them. They are trying to keep the peace right now but that doesn’t mean that they aren’t working against us. Right now they are deterred. They didn’t expect what the IDF did during the operation,” Saar said.

Despite the relative quiet the South has seen since the end of the operation, dozens of incendiary and explosive balloons have been launched toward southern Israel. In return, the army has struck Hamas targets.

Hamas has repeatedly threatened that it would restart hostilities over any controversial incidents in Jerusalem, while Israel has vowed that it would treat incendiary balloons like rocket attacks.

But the strikes were a relatively restrained response. The military is not looking to enter into another round of fighting, nor are the terrorist groups looking for a confrontation with the IDF.

Since the Great March of Return demonstrations began in 2018, several rounds of clashes between the IDF and terror groups have taken place, all of them ending without any tangible solution.

Over 4,000 rockets and mortars were fired toward Israel during Operation Guardian of the Walls, killing 11 civilians and one soldier. Israeli strikes against Hamas and Palestinian Islamic Jihad killed at least 256 Palestinians.

Saar and his battalion were deployed to the Gaza vicinity when the night disturbances by Gazans on the fence began – a month before the fighting broke out.

“There was that twist that only happens with Gaza,” he said, explaining that there was also a barrage of 36 rockets several days before the fighting began.

The night disturbances and the rockets were the beginning, and when Hamas fired rockets toward Jerusalem and an anti-tank guided missile (ATGM) toward a civilian jeep outside Sderot, “that crossed a redline for us,” Saar said.

Though the operation was mainly an air campaign, the 11 days of fighting saw unprecedented cooperation between forces, with the tank corps, infantry, intelligence, navy and air force working together to carry out missions against the terror groups.

“We all spoke the same language on the same system,” he said, “and that’s what made this operation successful. ‘Together we win’ is the motto of our battalion, and I really believe that if we work together, the synergy will allow us to win.

“When the ground forces and air force work together to close a circle against targets quickly, you accomplish a lot,” Saar added. “Close the circle quickly is the name of the game. Those who are quicker win.”