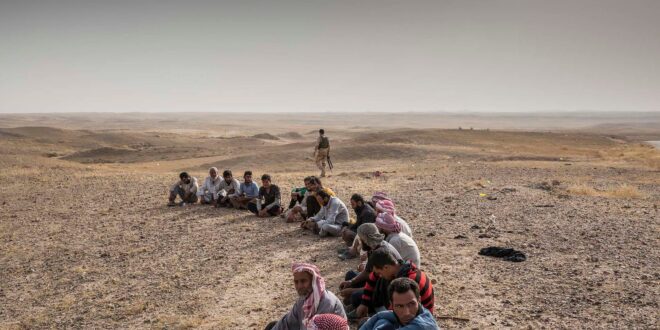 Iraq remains a struggling nation confronting enormous, social, economic and reconstruction challenges yet progressing in critical areas such as resettling its displaced population and preparing for national elections this fall, two ministers of the Baghdad government said.

The current government, which assumed power a year ago in the wake of nationwide protests against the political class, has closed all but two camps housing internally displaced persons (IDPs) in areas administered by the federal government of Iraq and begun the arduous process of securely returning Iraqis from the al-Hol camp in Syria, the ministers said. Meanwhile, the government is providing logistical support to electoral authorities to enable the October national elections. Amid these priorities, steps for urgent economic reforms are also being taken, they said.

“Iraq continues to face a complex set of problems,” said USIP’s director of Middle East programs, Sarhang Hamasaeed, who moderated the discussion last week with Planning Minister Khalid Najim and Minister of Migration and Displacement Evan Jabro. “But a government many thought had a short-term mandate to get Iraq out of political crisis has, in reality, been laying the foundation for longer term vision, reform and solutions.”

The Iraqi officials laid out starkly challenges the country faces. With the federal budget almost entirely dependent on oil revenue, low pandemic prices have left the government unable to pay the full salaries of civil servants. The scale of destruction left by the war against the Islamic State group (ISIS) is yet to be addressed. Unemployment and poverty are causing social unrest, while uncontrolled population growth of a million a year will permanently stress the government’s ability to provide jobs and services. This — and more — is in addition to Iraq’s better-known political and security problems.

But among the most immediate issues that the government of Prime Minister of Mustafa al-Kadhimi seeks to resolve is resettling the population of Iraq displaced by war, terror and ethnic conflict, Jabro said.

“The government wants all displaced persons to return to their places of origin, if possible,” Jabro said. “We are implementing that plan now,” she said, referring to the government’s March 2021 National Plan to End Displacement.
IDP Camps

There are still 26 IDP camps run by the Kurdistan Regional Government and supported by the central government. They primarily house minorities including Yazidis (Ezidis), Shabaks and Christians from areas heavily damaged by ISIS and the fight against the extremist group. While the security situation has improved in minority areas, conditions in their home areas are difficult: In the Yazidi heartland of Sinjar, for example, about 80 percent of structures are unusable and few services are available, Jabro said.

Outside of the Kurdistan Region, two camps remain in operation, one in Anbar province and another in Nineveh. Jabro’s ministry surveyed the residents and found the majority wanted to go back to their home communities, assuming tolerable circumstances prevailed. Jabro said problems with the security forces had been resolved in the two provinces and bureaucratic obstacles had been cleared to speed displaced peoples’ return. Reconstruction assistance for homes is coming to the ministry from international organizations and foreign governments.

Jabro rejected contention from some foreign quarters that Iraq is forcing IDPs out of camps prematurely and into difficult circumstances.

“I encourage the international community to visit families and ask whether life was better in the camp or their places of origin,” she said. The location for resettlement is always voluntary and IDPs can choose any other place to go, she said, indicating that international actors are picking up misinformation. Najim added that Iraq cannot afford to keep a camp open because “five families out of 5,000 want to stay.”
Back from Abroad

The “huge number” of refugees abroad are also in the process of returning, Jabro said. Last year the government funded the trip back to Iraq from relatively accessible Turkey for 800 people and a few dozen from Syria.

The 30,000 Iraqis at the al-Hol camp in Syria pose the greatest challenge. They are predominantly women and children taken into custody when the last ISIS redoubt of Baghuz, Syria fell in February 2019.

“These people are mostly victims of Daesh (ISIS),” Jabro said. “We cannot condemn the wife and children for crimes of the husband and father in a traditional society where the family has no choice.”

The process of return has restarted after the interruption of COVID-19, she said. About 5,000 families have registered to go back to their places of origin and the security agencies have vetted them, with few showing any voluntary association with ISIS. USIP has been supporting dialogue with tribal leaders regarding the families’ return, and the majority have agreed to resettlement, she said.

Nevertheless, their prolonged exposure to extremist beliefs has created the need to make the Jeddah Social Rehabilitation Center the first post-al-Hol stop — a move not available to anyone who directly and willingly supported ISIS, Jabro said. Their length of stay depends on a variety of circumstances and conditions, Najim said.
Reintegration Plans

Hamasaeed asked if the objective was to avoid stigmatizing al-Hol returnees and ensuring their disengagement from violence, rather than to achieve “deradicalization,” which involves “getting into peoples’ heads.”

“Those who adopt radical ideals in specific circumstances can be rehabilitated,” Najim replied. “I visited a program in Saudi Arabia where the Saudis said they had been quite successful in changing the lives of radicalized people — people who are now free from things they were convinced of in 2005, 2006.”

In Iraq, some such people today are political analysts or have government posts, Najim said, adding that he preferred not to name them in a public forum.

The best defense for the country is to provide former extremists with local platforms to speak about their experiences and ideological evolution, he concluded.

Iraq’s allocation of resources to returning the displaced is a delicate issue given the government’s hard-pressed finances and lack of capacity. Some political actors are playing on the process for electoral advantage and social media is loaded with misinformation about the motives of donor organizations, the ministers said. Iraqis who stayed in their homes during the sectarian fighting and era of ISIS can resent international pressure to provide services and housing — however deficient — to those who fled, Najim said.

The key goal must be to move people home, he said.

In doing so, there is a gaping need for psycho-social services, and Jabro called on the international community and organizations for “indispensable” help with programs to rehabilitate those who were persecuted as well as radicalized.

Many of these programs were not available for the displaced in the camps; they are no less critical for those who have returned home, she said.

Post Views: 83
Previous What Could Make or Break Lebanon’s 2022 General Election
Next Cyber Insurance and the Cyber Security Challenge