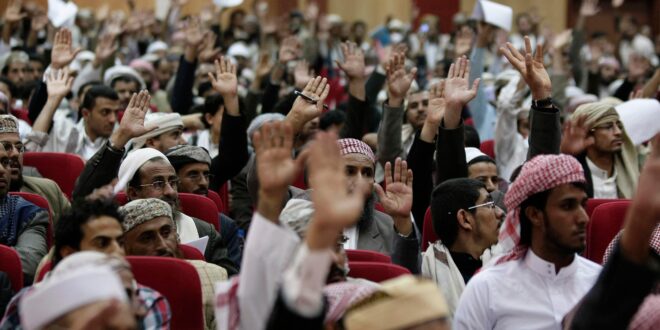 National Dialogues in Peacebuilding and Transitions: Creativity and Adaptive Thinking

At their best, national dialogues hold the promise of adding critical momentum in the drive to transform conflict inclusively. This report examines dialogues in six countries—the Central African Republic, Kenya, Lebanon, Senegal, Tunisia, and Yemen. These diverse processes show the possibilities for fostering dialogue, forging agreements, and driving toward peace; and the report offers extensive guidance on the possibilities and practicalities for those considering convening a national dialogue.

The proliferation of national dialogues in the early 2010s prompted the United States Institute of Peace to explore diverse experiences—in the Central African Republic, Kenya, Lebanon, Senegal, Tunisia, and Yemen—to draw lessons for practitioners and policy-makers from those case studies to design future dialogues that most effectively advance peacebuilding.

A national dialogue can be a useful approach along the path toward sustainable peace. In line with the foundational principles of peacebuilding, the shape, form, and structure of any national dialogue need to be tailored to the specific context. The temptation is to look to national dialogues as the transformative step in a peace agreement. Expectations are high: achieve inclusion; broaden participation; advance justice; and resolve fundamental issues of identity, forms of governance, constitutional priorities, and political reform. National dialogues, however, are not a panacea. They are best conceived as part of a broader continuum of mutually reinforcing local, subnational, and national efforts that foster dialogue, forge agreements, and drive toward peace.

In all national dialogues, the decisions made during the preparatory phase set the tone for the process and affect its ultimate legitimacy in the eyes of political forces and the public. A clear mandate for the dialogue, whether derived formally or informally, from a national process or an international process, can help buffer interference and maintain momentum. The selection of a convener—whether an individual, group, or organization—also affects public perceptions of the dialogue. Although national conveners can increase ownership and buy-in to a process, bias is a risk, particularly when a dialogue is convened by a sitting leader.

National dialogues with hundreds of delegates and broad agendas offer the possibility of bringing traditionally underrepresented groups to the table for a conversation and problem-solving about the drivers of conflict in a country. At the same time, these broad processes may become bogged down by disagreement or complex structures or produce an untenable number of recommendations. Smaller dialogues can allow for more in-depth conversations, particularly around sensitive issues, but may reinforce existing power structures.

Dialogues are far more likely to engender meaningful change when they are backed by a credible coalition that can work toward implementation of the dialogue through law or policy. A clear implementation plan prior to the dialogue’s inception is also critical to provide strategic momentum beyond the final conference or report. International partners can play an important role in keeping attention and resources focused on implementation. In earlier phases, international engagement needs to be measured to encourage genuine national ownership.