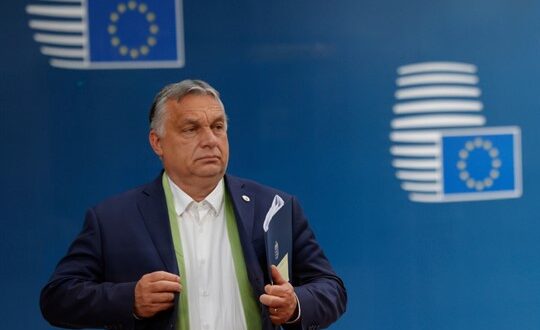 Violations of democratic norms by Hungarian Prime Minister Viktor Orban are nothing new, but the explosion of anger in Europe against the anti-LGBTQ law just approved by the Hungarian parliament, dominated by Orban’s Fidesz Party, suggests Orban has crossed a critical red line.

At last week’s European Union summit, no topic garnered more attention, or more fury, than the new law. If descriptions of what went on behind the scenes are accurate, Orban was berated with an uncommon degree of emotional intensity. Leaders of countries from across the EU lambasted Hungary’s self-described proponent of “illiberal democracy” in starkly personal terms—tears were even reportedly shed—a sign that this issue resonates in ways that surpass the many other subjects over which Hungary and its EU partners have been at odds.

Dutch Prime Minister Mark Rutte, who apparently led the charge, said he bluntly told Orban that if he doesn’t like Europe’s position on gay rights, perhaps he should leave the EU.

The legislation, approved by Hungary’s parliament in a vote boycotted by most of the opposition, bans content that is “deemed to promote homosexuality and gender change” in schools as well as in television programs for children. But what most rankles critics is that the bill, which includes measures targeting pedophilia, conflates LGBTQ issues with child sexual abuse.

Orban and his government have defended the law, claiming that it only aims to give parents responsibility for sex education. But critics at home and across the continent see a transparently discriminatory and painfully injurious bill.

The motivation behind the law is also transparent. Hungary’s next parliamentary elections are scheduled for next year, and Orban looks vulnerable.

As I wrote in May, Orban and other European populists have done a dismal job responding to the coronavirus pandemic. In keeping with populist tactics, they politicized the crisis and often chose crowd-pleasing moves over less popular public health measures. That’s part of the reason why Hungary and other Central European countries had much higher death rates than the rest of Europe.

Adding to the political troubles engendered by his faulty pandemic response, Orban is facing a disparate but for now solidly united opposition. For months, the polls have shown the prime minister, who has won easy landslides in three successive elections, in a tie with the united opposition, unable to pull away.

By injecting the inflammatory LGBTQ question into the political debate, Orban not only changed the subject from the pandemic. He drummed up support in what remains a conservative country—only about half of Hungarians support full LGBTQ rights, in contrast to more than 90 percent in the Netherlands. But he also sought to divide the opposition, with some success: One party of the united opposition coalition, the far-right Jobbik, supported the law.

And yet, Orban may have been too clever by half. Surely, he expected a negative reaction from Brussels, but he probably didn’t factor in the intensity of that reaction.

Not surprisingly, Luxembourg’s prime minister, Xavier Bettel, took the matter personally, telling his colleagues about his own struggles with gaining acceptance as a gay man and noting how often LGBTQ youngsters commit suicide. His stories reportedly sparked tearful reactions. Finnish Prime Minister Sanna Marin, whose parents are gay, also brought a personal take to the dispute.

Others saw the Hungarian law as a unique and dangerous challenge to the essence of the EU. “It’s an existential question for Europeans,” said French President Emmanuel Macron. Ireland’s minister for Europe, Thomas Byrne, characterized it as “a very, very dangerous moment for Hungary and for the E.U. as well.”

Hungarian officials struggled to defend the law from the excoriating attacks. The minister of justice accused Rutte of hypocrisy on Twitter. Foreign Minister Peter Szijjarto made a failed effort to paint the law as nondiscriminatory, saying it protects children but does nothing to restrict the freedoms of adults.

The fiery debates are not the end of this story.

European Commission President Ursula von der Leyen, who called the bill a “shame,” vowed to use all the powers of the commission to secure the rights of European citizens. The commission could bring a case against Hungary in the European Court of Justice, adding to the stack of cases against Orban’s government already piling up in the EU’s judicial bodies, including disputes over the rule of law, independent media and other issues. But as the clashes during the summit show, the matter of LGBTQ rights has special resonance that goes beyond the traditional confines of diplomacy.

This battle has the potential to influence domestic politics in other countries, generating domestic political pressure and rewards. Rutte, for example, may have been sincere in his criticism of Orban, but it didn’t hurt that Dutch voters feel strongly about defending LGBTQ rights, including same-sex marriage. The same is true for several countries in Western Europe, where equality is a settled matter of human rights.

Nor do issues like an independent judiciary tend to make waves at international soccer matches. The anti-LGBTQ law did. Last week, the Allianz Arena in Munich asked UEFA, Europe’s soccer authority, for permission to illuminate the stadium with the colors of the rainbow flag during the Euro 2020 match between Germany and Hungary to express support for LGBTQ rights in Hungary. UEFA denied the request, but thousands of fans in the stands waved their own rainbow flags, and other stadiums as well as national landmarks across Germany made it a point to illuminate the colors of the LGBTQ flag. Orban, who was scheduled to attend the match, canceled his visit.

Symbolism and recriminations are unlikely to change Orban’s mind, but the threat of losing EU funding may just cause him to rethink his strategy this time. Hungary is on track to receive 16.83 billion euros, or roughly $20 billion, as part of the EU’s pandemic recovery funds. Support for gay rights in Hungary is not as strong as it is in the West, but no one in the country wants to see those funds frozen or delayed under new rules that make disbursement conditional on respect for the rule of law. Other Central European EU members with anti-LGBTQ practices are watching closely.

In case the politicians can’t make Orban rethink his position, pressure from private investors may get it done. “Lack of inclusiveness” costs Poland, Hungary, Romania and Ukraine more than $8.6 billion a year, wrote the U.S. charge d’affaires in Poland, Bix Aliu, on Twitter. “Protecting human rights,” Aliu wrote in Polish, “also means greater prosperity for all.”

But as Orban found in Brussels, this issue is about more than just the financial bottom line. This one is personal.