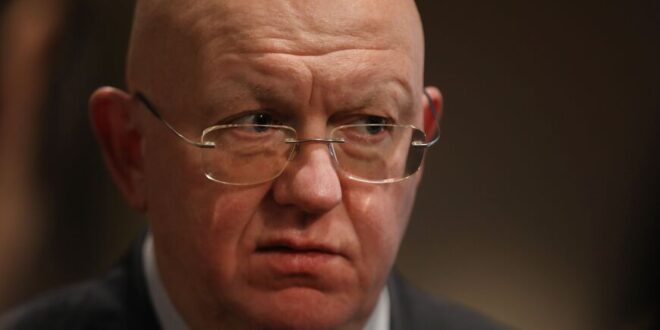 Russia’s UN ambassador said his government is still considering whether or not to veto the UN’s mandate for Syria’s last remaining aid crossing.

Russia’s UN ambassador on Wednesday said a proposal to open of additional border crossings for humanitarian aid into opposition-held areas of Syria, calling the idea a “nonstarter.”

Ambassador Vassily Nebenzia’s comments came as the UN Security Council considers a draft resolution that would allow aid deliveries to continue at Bab al-Hawa, on Syria’s border with Turkey, and open another site on Iraq’s border to aid.

The draft, put forth by Ireland and Norway, has the support of the United States.

Western officials are hoping to renew the UN’s mandate to deliver cross-border aid from the Bab al-Hawa crossing with Turkey into Syria.

Nebenzia told reporters in New York that Russian officials had not yet determined whether they would veto the renewal — a move that would mark the closure of the last border crossing for humanitarian aid deliveries to Syria’s beleaguered population.

“Today it is now an outdated operation and eventually it will be closed,” he said, according to Reuters.

“What we hear from our colleagues about reopening the closed cross-border points is really a nonstarter. We are discussing the one that is remaining,” Nebenzia said.

Russia insists that humanitarian aid in Syria be delivered with the permission of the Syrian government under President Bashar al-Assad.

Syria’s decadelong civil war lies in stalemate, with frozen front lines dividing the country in three. Assad controls the west and south of the country, while Arab opposition fighters and an al-Qaeda offshoot control the northwest along part of Syria’s border with Turkey. Northeast Syria — as well as its lucrative oilfields — are controlled by the United States and Kurdish-led forces.

The UN Security Council first authorized cross-border aid at four locations in 2014 based on annual renewals. Last year, vetoes from Russia and China narrowed the remaining cross-border aid authorizations to one.

Last week, US Ambassador to the United Nations Linda Thomas-Greenfield urged the Security Council to “do more” to push for additional openings.

Foreign Minister Mevlut Cavusoglu of Turkey, which backs Syrian opposition groups in Idlib province, confirmed Wednesday that his government is in talks with Russia over renewing Bab al-Hawa’s mandate.

UN officials have warned that a humanitarian catastrophe may result if the mandate is not renewed; the mandate expires July 10.