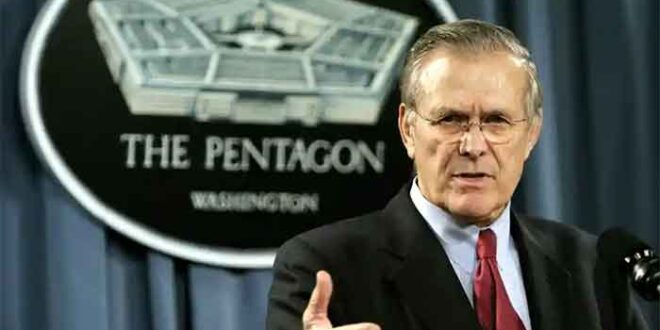 “A number of human beings have been liberated and they are out from under the heel of a vicious, brutal regime,”

I rarely read the newspapers these days (what’s the point?) but that statement caught my eye during a quick glance last week.

That was Donald ‘Defense’ Rumsfeld at a briefing on military operations in Basra, southern Iraq – his first visit to the United States’ newest colony. And this on a day when for the second time in the same week, U.S. soldiers shot and killed anti-American protesters in the city of Fallujah, 30 Kms from Baghdad. I will not dispute what the man said – what’s the point again? But the choice of words that laid out his lie went through my heart like a piece of cold rolled steel.

A number of human beings? As in 0101010101? Or 666? What do numbers have to do with human beings? Who or what is this fella, Rumsfeld? Is he man or manufacture? What brand of engine oil runs in his Teflon veins?

I can’t entirely figure it out. Of all the Dubya’s Men this stern-looking sophist is the most mysterious. Colin ‘Pummel’ – easy to understand – he is the fall guy and point man mixed up together. Black Jeeves playing White James Bond – the butler who always does it. (sorry about that Colin, but it’s time you went back to your roots)

Condeleeza Lies (as my Thai friends would call her), is hmmm, the Neo-con moll – providing a sort of gender balance to the White House cabal. Paul WOLFowitz, the name says it all.

But I just can’t put a finger on Rumsfeld. (I really fear a short-circuit). No, the man is not slippery in the usual sense, just elusive, in a strange kind of way. He is on a different plane altogether. Like a banished Roman general doing time travel. (Banished, I am sure for screwing up some ancient near East campaign) It is important to nail this fellow down – on a shrink’s couch. Maybe, a few dozen sessions will be needed. But the task is important and certainly worth trying. There are simply too many of this Military-Industrial-Complex personality types operating the levers of power in our world.

So here goes, let me try and ‘analyze this’. Of all the chicken hawks he is probably the most hard-nosed; someone should check this out though, literally). He is no ordinary American politician. He is tinker, tailor, soldier, spy – all avatars rolled in one. This fellow has more heads than any ancient Indian demon – all clanging constantly with their macabre plots and plans. Rumsfeld-the-Old Warrior, defending his country’s borders, expanding them if needed, protecting the American Way of Life, protecting Americans for whom protecting their own interests is a Way of Life – and not just for a year or two but a full bloody century. Rumsfeld-the-Patrician.

‘Countries win conventional wars, but it is concepts that win unconventional ones.’ Once upon a time real people died in wars but these days it is numbers that disappear. He is the Pythogoras of the rat pack. Rumsfeld-the-Mathematician.

Rumsfeld – scouring, scouting, sniffing out those terrorists from the darkest corners of the planet. (‘Switch off those lights please, I need a dark corner urgently.’) Leaving no stone unturned, no cave unexplored. Rumsfeld-the-Alsatian.

Woof, woof, I am just about to put my paw on a landmine!

WMDs in Iraq ? Hey presto! They have disappeared! . . Rumsfeld – moving, removing, cutting, pasting, tossing, turning, cooking up a new strategy to defend America’s interests. `Cut the salt, a little more pepper please. Turn the heat on, shake the jar’ and so on. Rumsfeld-the-dietician.

I can picture Rumsfield in his garden. His grandchildren playfully romping around him. He does not see them, does not hear their laughter, for he is squinting his steely eye looking past the perimeter fence for foes, imagined and real. ‘ I will not let those dirty Arabs harm a single hair on my children’s head’ he says to himself.

Even if that means taking the head of every single Arab child. Or for that matter the heads of a few American children too. A few thousand children – other people’s children – do not matter – it is the idea of the INFANT that is important. We will kill democracy in order to save it. We will pitch for a century even if our planet’s days are numbered. He does not say all this. Those are all implicit in his approach – these are THE RUMSFELD RULES.

So this is what we have. No point calling him Evil or any such banal term. I have noticed how such barbs tend to bounce off this character. Like firing small ammunition at an Abrams tank – a waste of time and bullets. He certainly has a strong plate of armour, our Rumsfeld. He has. When he takes a stand or for that matter even strikes a simple pose it is nigh impossible to budge him from his post. (Madame Tussaud’s may want him alive when he retires.)

But then he is not the retiring variety either. I have seen this type before- they just go on and on and on till someone of similar demeanour comes along and nicks their batteries. Then they come to a sort of halt sputtering, muttering to themselves for the rest of their lives something about Al-Zheimers, Al-Qaeda, Al-Gore.

We have a somewhat similar character as our deputy prime minister in India. Lal Krishna Advani – the right wing ideologue who, in 1989, drove a Toyota van decked up like an ancient Hindu chariot through the country. All part of a campaign to bring down a 16th Century mosque in the central Indian town of Ayodhya. The demolition of the mosque sparked off riots that killed thousands of hapless Muslims and Hindus. ‘Stuff happens’, he said at the time. In chaste Hindi too. He is a chaste Indian version of Rumsfeld, on wheels. (Do they still have chariots in the United States? It is an interesting thought. I mean, to put Rumsfeld on one of them. May fulfil a childhood ambition of his perhaps?)

Talking of chariots, there is that other thing about Rumsfeld – history. The US-led invasion of Iraq would ‘go down in military history because of its unprecedented combination of power, precision, speed and flexibility’, he said the other day. (Why do things always ‘go down’ in history? I guess, when they go up and hit the ceiling even the embedded scribes run for cover.)

There is surely something terribly wrong with the very idea of history. Especially because of those who see its repetition more as mission than condemnation. (Remember Teheran, 1979? Of course, and we are doing a repeat in Baghdad, 2003). And those who are obsessed with the arcane, morbid details and debates of dead History. Like falling in love with a graveyard and then rearranging the world to look like one. That’s Rumsfeld the Mortician.

Is Rumsfeld vulnerable? Like that hole in the back of the Abrams tank that you can apparently lob grenades through – does he have one – the metaphorical one I mean? And did he have a childhood at all? What was he doing then? Organizing missile defense against the Injuns, pre-emptive strikes against aliens, memorizing Clausewitz while Auschwitz was still happening?

Is the man corrupt? I don’t think he is too much into making money for himself, or promoting personal interests beyond a point (maybe a few million missing dollars, here and there, borrowed to build the new American Century) Nor do I think there is going to be a Rumsfeld Jr. taking over from him in the future. He is not into Dynasty, just plain Nasty will do for now.

And does he pray? Does Rumsfeld ever go down on his knees and remember his Maker? Not really, unless you call giving God an ultimatum a prayer. `48 hours to show me Your Cards’. This Immaculate Concepts man is in close competition with the Creator Himself. ‘I could have done in five days what YOU did in seven’ kind of thing.

So, where does his secret lie? I am only guessing, but I think he does have his Achilles heel, hidden somewhere deep inside his brain (hey, when you put your foot in your mouth so often the heel does tend to go strange places). Hidden deep in his subconscious is something that is gnawing up his aseptic soul.

It is all still a puzzle, wrapped in an enigma, wrapped in mystery. Wait a minute. That’s supposed to be the former Soviet Union, right? Maybe, that’s where the secret lies – in the deep, deep freezer of the Cold War.

Who, did what, when? What have the Reds under his Bed done to this poor guy – spooked him so beyond repair – by disappearing so early in the act? Why did they leave this little man on the empty stage all alone – spouting his pet monologues to an empty theatre? See, what Rumsfeld and his pals are doing now – putting on the evil and empire light and sound show to get their audience and applauses back.

I can only speculate about all this, and never prove anything. What I know is that someone needs to thaw this man out from the intellectual ice-age he seems to be stuck in. And for this task, a mere ice-pick or a blowtorch will not do. What we need is a finer device, that can probe deeper and unlatch the very lattices that hold up the warped worldview he represents. And with that liberate, not just him, but all the leading ghosts from the planet’s past – who threaten to continue haunting its future.