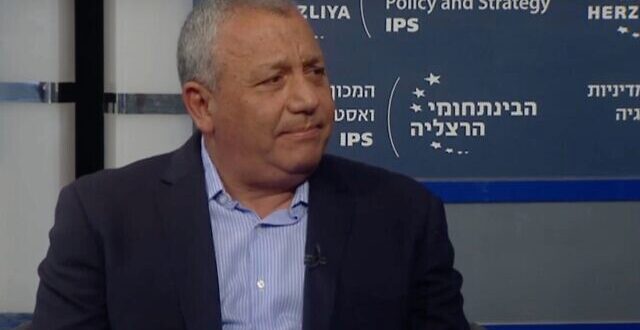 Gadi Eisenkot appears to imply US exit from accord was a mistake; also pans ‘irresponsible’ comments on covert Israeli actions, in seeming criticism of ex-Mossad chief, Netanyahu

Former IDF chief of staff Gadi Eisenkot said Friday that Iran is nearer than ever to producing a nuclear weapon, while appearing to imply that America’s 2018 exit from the accord was a mistake.

During a conference at the Peres Center for Peace, Eisenkot also seemed to criticize former Mossad head Yossi Cohen and former prime minister Benjamin Netanyahu for “irresponsible” boasting over Israel’s actions against the Islamic Republic.

Speaking on stage, Eisenkot said: “We can see today that the [Trump administration’s] exit from the deal and maximum pressure campaign and actions against Iran led to some achievements, but we can’t deny the fact that Iran is the closest it’s been to a bomb, in its capabilities, since it launched the [nuclear] program.”

Asked directly if Donald Trump’s abandonment of the 2015 accord reached by his predecessor Barack Obama had been a mistake, Eisenkot demured, saying “it was an American decision.”

The bottom line at this point in time, he said, was that “the deal is in US interests and is a fact. The point for Israel should be to reach an intimate dialogue with the Americans and other countries to ensure Iran does not have nuclear capabilities — [to ensure] that it is a better deal, more long-term with tough inspections.”

He added that “at the same time, we need to continue what has been done for decades, without fanfare and under the radar: to undermine this program covertly in various dimensions.”

In what appeared to be criticism of former Mossad leader Cohen and ex-premier Netanyahu, Eisenkot criticized Israel’s recent public boasts over actions against Iran.

“I think it’s right to maintain a policy of ambiguity, not to boast or poke in the eye. Those who need to know, know,” he said. “The way things came out in the past year and even before was irresponsible.”

Criticism was directed at Netanyahu as Israel more openly acknowledged or strongly hinted at attacks on Iran’s nuclear program in the past few years.

Cohen has come under criticism for a highly revelatory interview last month about Israel’s actions against Tehran shortly after leaving the post.

This week the UN, the European Union and many Security Council members urged the United States and Iran to quickly put the nuclear deal aimed at reining in Tehran’s nuclear program back on track, though it is not clear how close the sides are to an agreement.

On Wednesday Iran’s envoy to the United Nations told the Security Council that an essential condition for reviving the 2015 nuclear deal is a commitment by the US that it will never again unilaterally pull out of the agreement.

Former US president Donald Trump withdrew from the accord in 2018 and reapplied sanctions that have crippled Iran’s economy. Iran responded by dropping some of its own commitments to the deal, which was also signed by Britain, France, Germany, Russia and China.

During six rounds of talks in Vienna, the six countries that remain parties to the agreement have been trying to resolve major outstanding issues on how the United States can rejoin. US President Joe Biden has said the US wants to return to the pact.

After the latest Vienna talks on June 20, the EU official who coordinated the meeting, Enrique Mora, told reporters: “We are closer to a deal, but we are not there.”

Top Russian representative Mikhail Ukyanov said that “the time has come for political decisions” ahead of what is supposed to be a final round of negotiations.

But in the Security Council on Wednesday, diplomats from Iran and the United States took tough stands, giving no hint of compromise during a meeting on implementation of the 2015 council resolution that endorsed the nuclear agreement.

US deputy ambassador Jeffrey DeLaurentis told council members that “the last few rounds of discussions in Vienna have helped to crystallize the choices that need to be made by Iran and by the United States in order achieve a mutual return to compliance.”

But DeLaurentis said recent reports by UN Secretary-General Antonio Guterres and the International Atomic Energy Agency make clear that Iran is escalating its nuclear program beyond the agreement’s limits, both in numbers and types of centrifuges, quantities and levels of uranium enrichment up to 60 percent, and producing uranium metal.

“We urge Iran to refrain from taking further escalatory steps and to return to full implementation” of the agreement’s provisions, “including those related to IAEA verification, monitoring, and implementation of the additional protocol,” DeLaurentis said.

Post Views: 205
Previous Rehabilitating Rumsfeld, Erasing Empire: On All Those U.S. War Crimes in Iraq
Next Hamas Enjoys a Surge in Support after May Confrontations with Israel