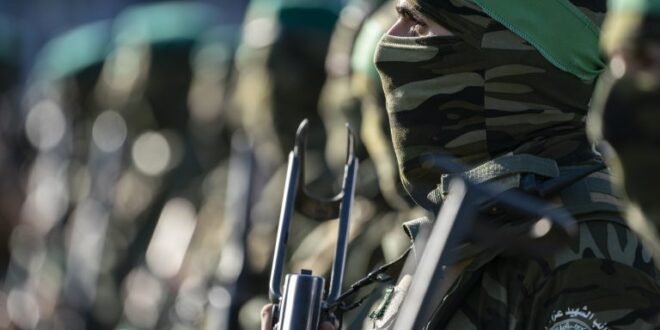 Hamas Enjoys a Surge in Support after May Confrontations with Israel

Recent fighting between Israelis and Palestinians, coupled with Palestinian Authority President Mahmoud Abbas’s decision to postpone elections, has produced a surge in support for Hamas.

Most Palestinians believe Hamas prevailed in the May confrontation with Israel and as such, deserves to represent the Palestinian people.

This shift in public opinion is unsurprising, as support for Hamas has historically surged after violent confrontations with Israel.

Increased support for Hamas poses a number of challenges for Israel’s new coalition government as well as for the Palestinian Authority.

A recent poll by the Palestinian Center for Policy and Survey Research (PCPSR) identified a dramatic surge in Palestinian support for Hamas following last month’s violence between Israel and Gaza. The conflict was sparked by violent confrontations in East Jerusalem after the Israeli government released decisions in April that would evict several Palestinian families from the Sheik Jarrah neighborhood and impose restrictions denying Muslims access to the religiously significant al-Aqsa Mosque during the holy month of Ramadan. Fighting between protesters and Israeli police ensued, with the police firing tear gas into the mosque. In response, Hamas launched rocket attacks into Israel, initiating an eleven-day war that led to the deaths of more than 250 Palestinians and thirteen Israeli residents.

Prior to the confrontations, Mahmoud Abbas, President of the Palestinian Authority (PA), made the decision to postpone the Palestinian legislative elections that were scheduled to take place on May 22. Abbas’s decision was based on his claim that Israel refused to allow the elections to be held in East Jerusalem. However, the fragmentation of the Fatah movement—the largest faction of the multi-party Palestine Liberation Organization (PLO)–and early polling data that predicted a Hamas victory likely had more to do with the decision to postpone. While Egypt, Jordan, and Israel welcomed Abbas’s postponement, it was met with outrage from Palestinian voters, who accused the octogenarian leader of finding excuses to further extend his grip on power. The aggregation of these recent developments has produced a dramatic shift in Palestinian public opinion. According to the PCPSR poll, there is a general consensus that Hamas won the May confrontation with Israel, and most Palestinians believe that Hamas—not Fatah under Abbas—deserves to represent and lead the Palestinian people. Moreover, a two-thirds majority rejects the PA’s decision to postpone the elections.

According to Dr. Khalil Shikaki, the head pollster of the PCPSR, this dramatic shift is unsurprising, as it resembles previous swings toward Hamas during and after intense periods of conflict. In 2006, for example, Hamas decided to formally participate in legislative elections after nearly five years leading the Second Intifada, a Palestinian uprising against Israel. In the previous year, Israel initiated a unilateral withdrawal from its settlements in Gaza, a move the Palestinian people attributed to Hamas, not the PA, which was at the time viewed as corrupt and ineffective. Furthermore, the Palestinian people saw a peace settlement with Israel as futile, which only bolstered support for Hamas as it entered electoral politics. Hamas won a landslide victory in the 2006 elections, securing 76 of the 132 parliamentary seats, and initiated a forceful takeover of Gaza the following year.

Fifteen years later, the Palestinian Authority has yet to hold another legislative or presidential election, and the recent surge in support for Hamas could pose a myriad of problems for both the PA and Israel’s new coalition government. While Hamas is unlikely to seek an escalation of conflict and another round of full-scale violence, the poll indicates that Hamas has succeeded in consolidating support among the Palestinian public. The main question is whether Hamas can maintain this support until elections are rescheduled. According to Dr. Shikaki, the current shift in support could be a temporary reaction to recent events, as according to previous polls, public opinion usually reverts to “normal attitudes” within three to six months of a confrontation. The return to normal attitudes has typically been associated with Hamas’s failure to maintain its gains and/or the PA’s ability to take measures to pacify the Palestinian people and win back their trust. For Abbas, regaining trust would likely require taking action to reform the PA, which is increasingly seen as corrupt, or making a diplomatic push in the Israeli-Palestinian peace process–both of which appear unlikely. Hamas, on the other hand, cannot rest on its laurels by taking minimal action in the form of calls to “resist” and firing a few incendiary balloons into Israel, as it did last week in response to a march organized by Israeli nationalists in East Jerusalem.

The political tensions surrounding the current conflict are unlikely to abate in the near future. Hamas has won the hearts and minds of the Palestinian people for now, and Abbas and the Fatah party are facing a lose-lose situation. If elections are rescheduled to take place over the next few months, they risk another Hamas landslide victory. If they tarry, however, they risk exacerbating existing internal strife and losing whatever political support they have left. Only time will tell what Palestinian governance will look like in the coming months, but the future does not look bright.