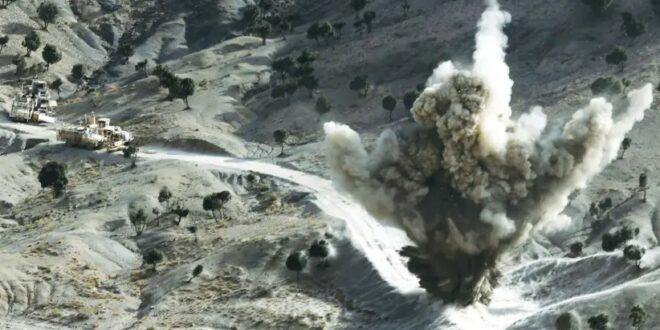 Pakistan’s support of jihadi groups stems partly from cynical realism, in order to expand its sphere of influence in Afghanistan and support the Islamist insurgency in Jammu and Kashmir.

Two decades after the decision was made to invade Afghanistan in a bid to combat extremism and install democracy, the United States is preparing to withdraw its remaining troops by September 11, as the Taliban continues its advance on Kabul. The attempted liberation has cost the US more than $800 billion and has led to a war-ravaged country vulnerable to an imminent Taliban victory. While there are many factors that have contributed to the failure of the invasion, we should not dismiss the pivotal role that Pakistan has played through its continuous support of the Taliban and other jihadi networks.

Faced with the reality that Pakistan’s army cannot compete in a conventional war, Islamabad has sought to cultivate radical jihadi groups to act as proxies in order to combat foreign interferences in the region and destabilize India. Pakistan’s ISI has been providing training, weapons, funding and intelligence for the past decades to a number of terrorist organizations including the Taliban, the Haqqani Network, Jaish-e-Mohammed (JeM) and Lashkar-e-Taiba (LeT).

The former president of Pakistan Pervez Musharraf has even publicly recognized that the government has enabled terrorist groups to carry out attacks on Indian soil. LeT orchestrated the Mumbai terrorist attacks in 2008, which resulted in the deaths of 160 civilians, and JeM is responsible for the 2019 Pulwama attack in Kashmir, which killed 40 Indian police personnel.

Despite the horrific crimes committed, Pakistan refuses to seriously prosecute these groups and continues to be a safe haven for terrorists such as Masood Azhar, the founder and leader of JeM.

Their blatant support for such groups is why the Financial Action Task Force (FATF) decided last week to retain Pakistan on its “gray list.” While this has dealt a severe blow to the country’s economy, it does put some pressure on Pakistani institutions to crack down on the financing of terrorism. However, since entering the gray list in 2018, Pakistan has proven to be disingenuous in its efforts to combat terrorism, committing only to superficial changes. If Pakistan continues to remain uncooperative in the prosecution of terrorists, the international community should hold it accountable by moving it to the blacklist.

Ironically, Pakistan has long been viewed as a key ally in resolving the conflict in Afghanistan and fighting the war on terror. Despite repeatedly undermining US strategy – out of fear of antagonizing a country with nuclear weapons, coupled with the hope that Islamabad’s ties to Islamist groups could be instrumental in negotiating a peace process in Afghanistan – the West has been reluctant to adopt a harsher stance against Pakistan’s double game.

Pakistan’s support of jihadi groups stems partly from cynical realism, in order to expand its sphere of influence in Afghanistan and support the Islamist insurgency in Jammu and Kashmir. However, it has also been encouraged by the radicalization of the country and its institutions. Its strategy was successful in defeating the Soviet Union in the ‘80s and the United States today, but it could also easily backfire and threaten its fragile political stability and further radicalize a country in possession of nuclear weapons.

The United States’ commitment to a withdrawal from Afghanistan will encourage other foreign forces, such as Turkey and Qatar, to take advantage of the vacuum left in its wake. Prime Minister Imran Khan has recently admitted that US withdrawal has reduced Pakistan’s leverage over the Taliban, stating their influence over them diminishes as they feel stronger. Despite having benefited from the support of the ISI, the Taliban is an independent terrorist organization with fickle allegiances. Pakistan’s tenuous control over the Islamist group has made it increasingly wary of its potential victory in Afghanistan.

Without US troops or a reliable peace deal, the continued violence will spill over into Pakistan and result in a mass influx of refugees. A Taliban victory would also embolden other Islamist groups present in Pakistan that wish to see an Islamic revolution take place. Khan’s lack of control of his country’s own military and security apparatus will cause greater internal divisions that could make Pakistan susceptible to a coup or revolution.
Ultimately, Pakistan’s dangerous gamble has left it in a perilous state, with fewer allies and greater mistrust.