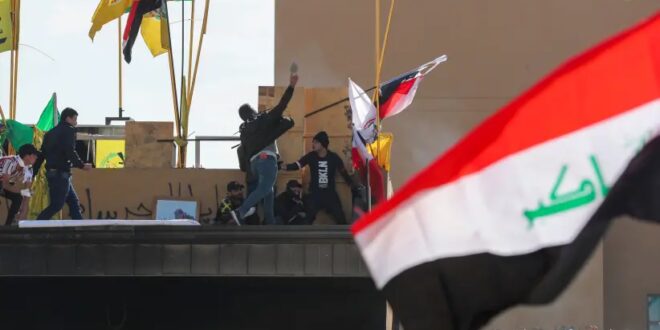 Is Iran preparing a new series of attacks on US, Israel with proxies?

This is the scenario the US has been concerned about for years. The pro-Iran attacks may spill over to Syria.

Iran’s media gave major headlines to claims of attacks on US forces in Syria on Sunday. The July 4 date was symbolic; it was US Independence Day. What could be a better day for Iran to claim it had struck a US base in Syria?

However, it turns out the rumors of the rocket attacks were likely false, and the US-led coalition denied any incident happened in Syria.

That doesn’t matter for Iran’s media outlets, especially those that have links to the Islamic Revolutionary Guard Corps. The reports claimed there were attacks and “explosions” at a US base. However, sources there denied the reports.

What Tehran may be messaging on this issue is more complex than just rumored attacks. Iran may be pinpointing where the next front will begin in its conflict with the US.

Since 2019, Iran has upped attacks on the US in Iraq. It has used militias, such as Kataib Hezbollah, to carry out numerous attacks. It also downed a US drone in June 2019 and mined ships in the Gulf of Oman in May and June of that year. At the time, former US secretary of state Mike Pompeo warned about the Iranian threats. The threats increased rapidly through the fall of 2019.

There were concerns expressed by American officials in the fall of 2019 that Israeli-Iran tensions could affect the US. An inspector-general report from the US-led anti-ISIS coalition Operation Inherent Resolve (OIR) in November 2019 spotlighted “tensions with Iran and suspected Israeli airstrikes” as a complication for the OIR mission against ISIS in Iraq.

In addition, the report said US Central Command was concerned that “Iranian backed forces in Syria might look to target US military personnel or its partner forces in Syria if they view the US as complicit in Israeli strikes on its [Iran’s] forces.”

The report cited a July 2019 incident in which there was the “first of several suspected Israeli drone strikes in Iraq,” and it targeted a Popular Mobilization Forces’ “munitions depot near Baghdad.”

US Central Command also cited increased threats against US forces from Iranian-aligned groups in Iraq.

“Iranian-backed militias may view the US as complicit in the Israeli strikes, which targeted Iraqi militia bases allegedly housing Iranian weapons,” the report said.

That was in the fall of 2019. But much changed soon after when the pro-Iran militias in Iraq killed a US contractor in a rocket attack in December. The US responded with airstrikes, Iranian groups attacked the US Embassy, and the US responded by killing IRGC Quds Force commander Qasem Soleimani and Iraqi militia leader Abu Mahdi al-Muhandis in January 2020.

US President Joe Biden responded with airstrikes, the most recent of which hit pro-Iranian units in Syria in late June. The pro-Iran groups responded by shelling US troops in Syria.

This is the scenario the US has been concerned about for years. The pro-Iranian attacks may spill over into Syria. It is widely known the Islamic Republic has entrenched itself with boots on the ground in Syria. It tried to use Hezbollah to launch a drone at Israel in the fall of 2019. It launched a drone at Israel from Syria’s T 4 Airbase in February 2018 and again in May 2021.

Iran also tried to bring its 3rd Khordad air-defense system to Syria in April 2018. The same system was used by Iran to down the US Global Hawk drone in June 2019 off Iran’s coast.

What is known today is that Iran appears to be messaging about new attacks on the US in Syria. This could include attacks on US forces at al-Omar oil field or the Conoco petroleum company in areas the US is known to be stationed.

The US is in Syria to defeat ISIS and support the Syrian Democratic Forces. Satellite images published online by Aurora Intel from Planet Labs show that an area of the US facility at al-Omar oil field, called Green Village, was allegedly damaged in the June 28 shelling. A warehouse was damaged.

Iran’s militias tend to have good intel on US facilities. In April, they used a drone to target a secret CIA hangar in Erbil. A June 27 drone attack on Erbil targeted an area near the new US Consulate.

There is more to the Iranian threat than just using militias to harass US forces in Syria. Iran’s media reported about the targeting of an “Israeli-owned” ship making its way to India from the Persian Gulf is also likely signaling more targeting of commercial ships linked to Israel.

Iran began targeting ships in May 2019 and increased attacks against commercial ships linked to Israel this February. Israeli officials accused Iran of at least one of these incidents.

Defense Minister Benny Gantz had tough words for Tehran on Sunday, saying Israel would not accept Iran’s activities and entrenchment in the region. Iran knows that Israel is ready to act, he said.

Prime Minister Naftali Bennett convened a meeting on Sunday to discuss US-Iran talks and the possibility the US might return to the so-called Iran deal, journalist Barak Ravid reported.

These points of concern expressed by Israel, along with the messaging from Iran about targeting a ship and the US in Syria, appear to sketch out the possibilities for a new round of tension. This tension and incidents may include thousands of kilometers of possible strike targets by pro-Iranian groups.

This is how Tehran operationalizes these groups from Iraq, Syria, Lebanon and Yemen. Iran doesn’t fight wars; it gets others to do that. Now it wants to provoke more tensions with the US in Syria and possibly with Israel as well.