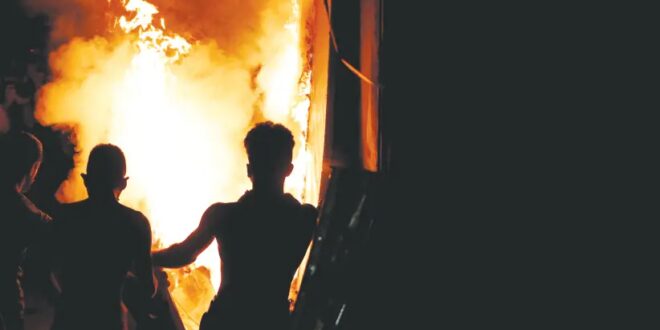 Lebanon has entered a cycle of unending crisis – analysis

Many factors have contributed to the cascading crises that afflict Lebanon — From a fractured government to a broken economy.

It’s difficult to pinpoint exactly when Lebanon’s current crisis began. There were protests in late June over a hike in fuel prices and protests against banks on June 26 when demonstrators attacked the Lebanese Swiss Bank and other branches as the local currency hit record lows.

These types of attacks have taken place before; banks were targeted in April 2020. And these crises go back to the reality that Lebanon lacks a new government, despite Prime Minister-designate Saad Hariri being on a foreign trip to drum up support in the UAE, Turkey and Egypt. Defense Minister Benny Gantz has offered to provide assistance to Lebanon.

Lebanon is in the midst of a long, slouching, slow-moving disaster, like a mudslide that gains momentum over time. The country is divided along sectarian lines and has a political system that is broken.

Lebanon also has an armed state-within-a-state called Hezbollah, which siphons off cash, plays a role in security, carries out extrajudicial assassinations and increasingly operates a parallel network of health, banking, construction and even supermarket services. These factors have hollowed out Lebanon, leaving it an empty shell.

The current crisis is over fuel prices and declines in exchange rates. According to Al Jazeera, “the cash-strapped country would now import fuel at 3,900 Lebanese pounds to the dollar, as opposed to 1,500. A ministerial source told Al Jazeera the price of a tank of petrol could almost double. The decision was made following a meeting last week between President Michel Aoun, Central Bank Governor Riad Salameh, caretaker Energy Minister Raymond Ghajar and caretaker Finance Minister Ghazi Wazni at Baabda Palace.”

Meanwhile, the European Union’s top diplomat has slammed Lebanese politicians for delays in forming a new government, with sanctions looming on the horizon. Hariri, who has so far failed to form a government, received support from his Sunni constituents again in recent days.

The Supreme Islamic Sharia Council, “which represents the Sunni community and its leaders in Lebanon, has renewed its support for Saad Hariri, the prime minister-designate, amid an escalating dispute over the failure to form a government in the country,” Arab News reported.

Lebanon’s central bank and banking institutions are also on the brink. On June 3, “the governor of Lebanon’s central bank reassured depositors that it was not bankrupt and that people’s deposits were safe and would be returned soon, after reversing a decision to stop withdrawals that triggered street protests,” Reuters reported.

THE DISASTER is growing, and there are warnings that Lebanon’s GDP will continue to fall, down some 30% in recent years. “The financial crisis has wiped out jobs, raised concerns for growing hunger and put more than half of the Lebanese population below the poverty line,” Reuters reported. “The Lebanese pound has lost around 90% of its value since late 2019.”

Who benefits from the ruin being visited on Lebanon? Hezbollah.

Hezbollah has not lost currency or its savings. It is mostly Lebanon’s middle class that has been destroyed. The upper class anyway kept money abroad in foreign banks and were fantastically corrupt, helping to lead the country to its current state.

Hezbollah, meanwhile, has continued to sponge up state assets, taking over more and more of what looks like government roles. This essentially means that in the future, the terrorist group will not be a “state within a state” in Lebanon, but rather will have a state within it called Lebanon, because the power relationship will have been reversed.

Hezbollah sent thousands of fighters to Syria and conducted foreign policy for Lebanon. Hezbollah leaders have openly argued for repositioning Lebanon to be linked to Iran and China and distancing it from the US. France has tried to mediate, but it has been unsuccessful. And the Lebanese have paid the price.

The endless crisis goes back a long way. Lebanon was battered by a civil war in the 1970s and ’80s. But it sought to put that behind it with the end of the Cold War and a deal brokered by Saudi Arabia. Ostensibly, Sunnis and Shi’ites gained while the Christian community lost out. But the end result was continuing division in the country.

When Israel left Lebanon in 2000, Hezbollah didn’t put down its arms, but rather put itself on steroids as it armed itself even more. In 2005, Hezbollah murdered popular former prime minister Rafik Hariri in a massive bombing, and in 2006, it attacked Israel and provoked a massive war.

In 2008, it took over part of Beirut in armed clashes. Then it set about holding the government hostage until it could get its chosen president, Michel Aoun, into power.

Lebanon lacked a president for years as Hezbollah waited. Now, as Lebanon’s crisis deepens, it continues to strengthen its grip and push Israel’s northern neighbor into a series of endless crises.

Post Views: 221
Previous Is Iran preparing a new series of attacks on US, Israel with proxies?
Next Gantz: Israel ready to provide assistance to Lebanon amid economic crisis