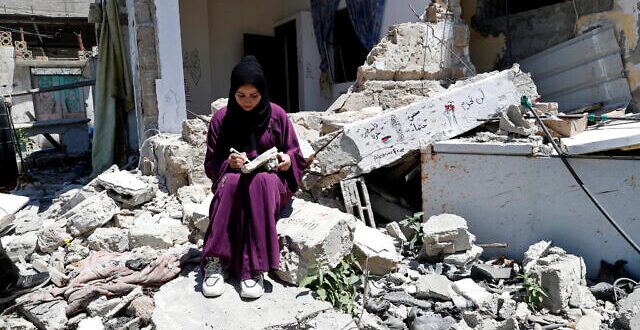 Damage assessment finds there was $380 million in physical damage and an additional $190 million in economic losses; Israel called on to upgrade border crossing

A UN report released Tuesday found that it will cost an initial $485 million to repair the damage caused in the Gaza Strip during eleven days of fighting between Israel and Palestinian terror groups in May.

According to the Rapid Damage and Needs Assessment, the fighting caused up to $380 million in physical damage and an additional $190 million in economic losses.

It said that during the first 24 months recovery needs will amount to $485 million.

A “quick to short-term recovery will depend on financial support, including from donors, as well as Israel’s cooperation to expedite access to materials and equipment intended for civilian purposes,” the statement said.

The report also called on Israel to upgrade the border crossing at Kerem Shalom.

Israel and Egypt have maintained a blockade on Gaza since Hamas took power in a bid to stop the smuggling of arms and of materials used to make rockets and other weapons and construct fortifications.

From May 10-21 Hamas and other terror groups fired some 4,300 rockets at Israeli towns and cities. In response, Israel conducted heavy airstrikes against terror targets. The fighting ended with an Egypt-mediated ceasefire but not before 13 people were killed in Israel and over 240 in Gaza. The Israeli army said most of those killed in Gaza were terror combatants.

The RDNA was carried out from May 25 to June 25 2021 in partnership with the World Bank Group, the UN, and the European Union, in “close cooperation” with the Palestinian Authority and “in consultation with the civil society and private sector in Gaza.”

“This is yet another unfortunate episode in which the Palestinian people in Gaza saw themselves in the midst of conflict and destruction,” said Kanthan Shankar, World Bank Country Director for West Bank and Gaza.

“The priorities focus on ensuring a return to some normalcy by rapidly providing relief, repairing priority damages to infrastructure, and reinstating essential services disrupted by the conflict, to be restored at least to pre-conflict levels, if not further,” the statement said.

The report said the most critical recovery needs are to provide cash for around 45,000 people for food and non-food assistance as well as providing 20,000 full-time jobs for 12 months and prioritizing housing for those who lived in over 4,000 destroyed or partially damaged homes, among them 7,000 children.

Shankar said that Gaza’s gross domestic product could drop in 2021 from an estimated annual growth of 2.5 percent before the fighting to just 0.3%.

The report said that in Gaza there is 50% unemployment and more than half the population lives in poverty. In the wake of the conflict, 62% of the enclave’s population were left food insecure.

“The conflict significantly weakened livelihoods and the safety nets of the most vulnerable,” the statement said.

“The cessation of hostilities reached last month has largely held but remains fragile,” said Tor Wennesland, UN Special Coordinator for the Middle East Peace Process in the statement. “The UN is continuing its diplomatic engagements with all concerned parties to solidify the ceasefire.”

Sven Kühn von Burgsdorff, European Union Representative, urged that the civilian causalities and socio-economic impact are a reminder “that we must address the root causes of the conflict.”

Gaza’s recovery “must be backed by a meaningful peace process that will bring security and dignity for all,” he said and noted that “Palestinian unity and democratic renewal through free and fair elections are as well of crucial importance.”

The report emphasizes the importance of cooperating with the PA in reconstruction efforts in an implicit recognition that the Gaza-ruling Hamas terror organization should not be part of the process. But the Islamist movement is not mentioned by name in the 72-page report.

The US has pledged to help coordinate Gaza reconstruction as well, while emphasizing that Hamas must not be allowed to benefit from such efforts.

State Department spokesman Ned Price said Tuesday that the US is “committed to seeing to it that the Palestinian people receive that humanitarian relief, but we’re equally committed to ensuring that whether it’s – that certainly American aid does not in any way empower Hamas – empower Hamas financially, empower Hamas politically.”

“We will continue to work with our partners, whether that’s Egypt, whether that’s the UN and its institutions, to see to it that we can do those two things: to provide that relief to the Palestinian people without that relief making its way into Hamas coffers,” he added.

The Biden administration has not yet detailed how it plans to divert reconstruction funds from Gaza’s rulers, but a source familiar with the matter said the US, the UN and Egypt were waiting for the completion of the RDNA in order to move forward with more detailed plans to rehabilitate the Strip.

Whatever is decided though, the international community will need the cooperation of Israel, which runs most of the crossings into the Gaza Strip.

Prime Minister Naftali Bennett’s new government has maintained that it will not allow for long-term reconstruction efforts to move forward without Hamas agreeing to return the bodies of the slain IDF soldiers its held captive in Gaza since 2014 along with two Israeli civilians.

The Biden administration opposes the demand due to fears that it could lead to a breakdown in negotiations for a longterm ceasefire and a resumption of violence, two Western diplomats told The Times of Israel last week.

Last week the UN said it has agreed to take responsibility for the disbursement of Qatari funds in the Gaza Strip, according to a Palestinian newspaper report.

Quoting unnamed Palestinian sources, the Al-Quds daily said Israel was on board with the move as long as the flow of the money was monitored to ensure it was not diverted to the Hamas terror group, which rules the Strip and openly seeks Israel’s demise.

With Israel’s approval, Qatar has in recent years distributed hundreds of millions of dollars in cash to enable Hamas to pay for fuel for Gaza’s power plant, pay civil servants and provide aid to tens of thousands of impoverished families.