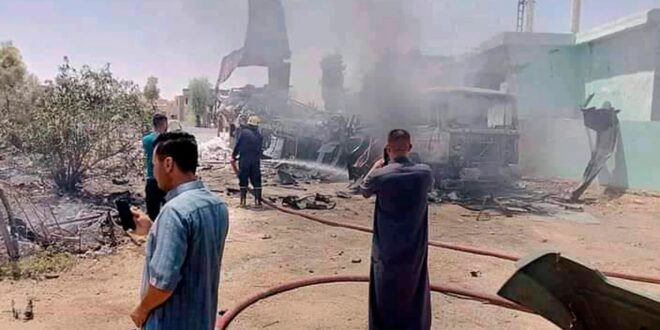 Wednesday’s rocket attack on Al-Asad Air Base marks the third time in as many days that U.S. installations in Iraq have come under fire — and it is still not clear who is responsible for the recent strikes.

Two U.S. service members were injured after 14 rockets were fired at the base around 12:30 p.m. local time on Wednesday, landing on the base and its perimeter, defense officials said.

The Iraqi military has tweeted pictures of a burning truck, from which the rockets were purportedly fired at Al-Asad Air Base.

Army Col. Wayne Marotto, the top U.S. military spokesman in Iraq and Syria, tweeted that the rocket launcher belonged to an “OMG” [Outlaw Militia Group], but he did not specify which armed group may have carried out the attack.

Getting information about the number of attacks against U.S. troops in Iraq and Syria is difficult, but recent posts on social media indicate at least four attacks have taken place this week so far.

On Monday, three rockets were fired at Al-Asad Air Base and a drone was shot down near the U.S. Embassy in Baghdad, according to media reports. No one was injured in either incident, officials said.

U.S. troops at Erbil Air Base came under attack from an explosive-laden drone on Tuesday, according to Reuters. No one was injured in that attack as well, Marotto tweeted at the time.

So far, the U.S. government has not publicly named which groups may be behind the attacks on U.S. troops in Iraq – and Syria – over the past two weeks.

On June 27, U.S. aircraft attacked Iranian-backed militia groups that the Pentagon claimed had used drones to attack American troops in Iraq. The three targets struck in Iraq and Syria were described as “operational and weapons storage facilities” used by groups such as Kata’ib Hezbollah and Kata’ib Sayyid al-Shuhada.

“Given the ongoing series of attacks by Iran-backed groups targeting U.S. interests in Iraq, the President directed further military action to disrupt and deter such attacks,” Pentagon spokesman John Kirby said at the time.

The“defensive precision airstrikes” were meant to demonstrate that the United States will act to protect its troops, but whoever is behind the most recent attacks in Iraq and Syria does not seem to have been impressed.