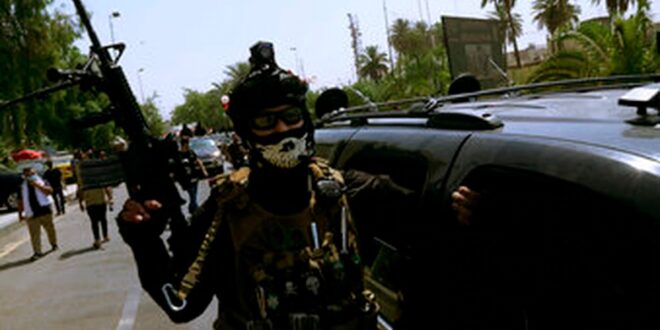 As US forces in Iraq and Syria face increasing attacks, fissures form between Iran and militias it backs

Two Katuysha rockets fell near the national security building, and in an open courtyard inside the Green Zone. A third rocket fell in a nearby residential area, damaging a civilian vehicle, the statement by the Iraqi security media cell said.

The attack which came shortly before daybreak followed two separate attacks on bases housing U.S. troops in western Iraq and across the border in Syria, where U.S-led coalition forces are based. The drone attack Wednesday in eastern Syria was foiled while 14 rockets landed in Al-Assad Air Base in western Iraq, lightly wounding two personnel.

The attacks come as tension is on the rise between U.S. troops and Iran-backed fighters as Baghdad and Washington negotiate a timeline for foreign troop withdrawal from Iraq.

The U.S. has blamed Iran-backed militias for attacks — most of them rocket strikes — that have targeted the American presence in Baghdad and military bases across Iraq. More recently, the attacks have become more sophisticated, with militants using drones.

Iran’s expeditionary Quds Force commander brought one main directive for Iraqi militia faction leaders long beholden to Tehran, when he gathered with them in Baghdad last month: Maintain calm, until after nuclear talks between Iran and the United States.

But he was met with defiance. One of the six faction leaders spoke up in their meeting: They could not stay quiet while the death of his predecessor Qassim Soleimani and senior Iraqi militia commander Abu Mahdi al-Muhandis in a U.S. drone strike went unavenged.

Militia attacks have only been increasing against the U.S. in military bases in both Iraq and Syria. Three missile attacks in the last week alone resulted in minor injuries, stoking fears of escalation.

The details from Esmail Ghaani’s visit, confirmed to The Associated Press by three Shiite political officials and two senior militia officials, demonstrate how Iranian-aligned Iraqi militia groups are asserting a degree of independence, sometimes even flouting orders from Tehran. Iran now relies on Lebanon’s Hezbollah for support in reining them in, and there is potential that Iran’s new president could play a role in doing the same.

The officials spoke on condition of anonymity to discuss the private meetings.

Iran’s influence, sustained by ideological ties and military support, has frayed because of the U.S. killing of Soleimani and al-Muhandis last year, because of differing interests and because of financial strains in Tehran. With nuclear talks restarting following U.S. President Joe Biden’s inauguration this year, these differences have come to the fore.

“Iran isn’t the way it used to be, with 100% control over the militia commanders,” said one Shiite political leader.

The attacks are blamed on the Iranian-backed militias that make up the bulk of Iraq’s state-supported Popular Mobilization Forces. The Biden administration has responded by twice targeting Iraqi militia groups operating inside Syria, including close to the Iraqi border.

“What is taking place now is when Ghaani asks for calm, the brigade leaders agree with him. But as soon as he leaves the meeting, they disregard his recommendations,” said another Shiite political leader.

The loudest of the defiant militia voices has been Qais al-Khazali, leader of the Asaib Ahl al-Haq faction, which also maintains a political party. On June 17, only days after Ghaani’s meetings with the militias, he said in a televised address that they would continue to target the U.S. “occupier” and that they will not take into consideration nuclear talks.

“And that decision is an Iraqi one,” he said.

The coalition has formally ended combat operations and reduced troop levels significantly in the last year. Only 2,500 U.S. troops remain in Iraq and discussions are ongoing with NATO to transfer to an advisory mission. Iraq still needs coalition support in surveillance and intelligence gathering and airstrikes against Islamic State group targets.

Some argue the ongoing attacks benefit Iran by maintaining pressure on the U.S.

During talks with Shiite political officials during his visit, Ghani said Iran doesn’t interfere in their political work, but that military matters were different. “These must be approved by the Revolutionary Guard,” one political leader recounted him saying.

Still, Ghaani did not reprimand the militia groups during the meeting. Instead, he told them he understood their concerns.

Iran has struggled to fill in the gap left in the absence of Soleimani and al-Muhandis, who were commanding figures able to push factions into line and resolve disputes among them.

“Ghaani has a different style and capabilities,” said Michael Knights, a fellow at The Washington Institute. He has a looser framework, establishing broad red lines on some matters, while “other things are ‘don’t ask, don’t tell,” he said.

Along with asking for less, cash-strapped Iran has been giving less as well. Assistance to the groups has been significantly downgraded since U.S. sanctions began crippling Iran’s economy last year.

Divisions among factions have deepened, with growing competition among militias and Shiite politicians.

Ghaani came to meet the militia leaders to mend tensions that were sparked weeks earlier when Iraqi authorities arrested a paramilitary commander, Qassim Musleh, prompting a standoff between PMF fighters and security forces. Ghaani brought a letter from Iran’s supreme leader, Ali Khamenei, criticizing the PMF for its reaction, saying it weakened their position.

To apply pressure on the factions, Iran has come to rely on Hezbollah leader Hasan Nasrallah in Lebanon, a figure the militias highly respect. Almost weekly, various factional leaders hold face-to-face meetings with him in Lebanon, said Shiite political leaders.

Iranian President Ebrahim Raisi, elected in June, also may be a unifying figure for the militias, which hold him in high esteem, political and militia officials said. When Raisi visited Baghdad in February, he met with PMF commanders and told them, in fluent Arabic, “Our flesh is your flesh, and our blood is your blood.” Ghaani communicates with brigade leaders through an interpreter.

“The resistance will grow in power and will see its best of times due to the election victory of Raisi,” said Abu Alaa al-Walae, commander of Kataib Sayyid al-Shuhada, in a recent interview.

A previously unknown group claimed responsibility for the Wednesday attack on Al-Asad Air Base, saying it was a message to U.S troops in Iraq: “We will force you to leave our lands defeated.”

A drone attack on Tuesday was reported on Irbil airport in the northern Kurdish-run region, near where U.S. forces are based. In Syria, the U.S.-backed and Kurdish-led forces said they foiled the Wednesday attack that was using drones on the al-Omar oil field in the eastern province of Deir el-Zour. Hundreds of U.S. troops are stationed in northeastern Syria, working with the Kurdish-led fighters in battling the Islamic State group. Thousands of Iran-backed militiamen from around the Middle East are deployed in different parts of Syria, many of them in areas along the border with Iraq.

A statement from the Security Media Cell, affiliated with Iraq’s security forces, on Thursday said these attacks endangers the lives of citizens and targets diplomatic missions and will be faced forcefully. Iraq’s government had called Wednesday’s attack “a terrorist” one that violate Iraqi laws.

Also on Thursday, the spokesman for the U.S.-led coalition Col. Wayne Marotto said these attacks undermine “the authority of Iraqi authorities, the rule of law and Iraqi National sovereignty.”

Post Views: 203
Previous Report: Qatari envoy arrives in Gaza Strip for first time since May conflict
Next Poland could purchase M1 Abrams tanks from US