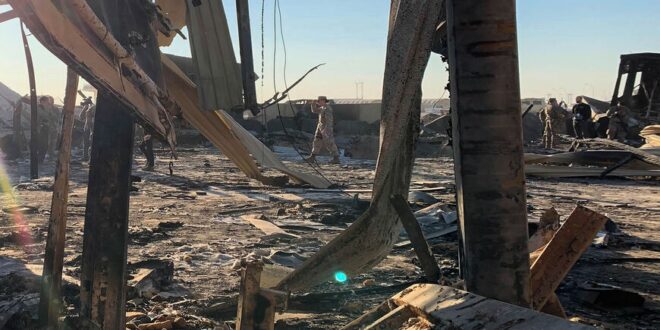 Islamic State (IS) remnants continue to make their presence known in mostly Sunni-majority areas in Iraq, including an attack earlier this month on fishermen near the Haditha Dam, not far from the town of the same name that was under siege for over a year during the battle against IS.

Iraq officially declared victory against IS in December 2017, after the last urban center in the country — Rawa in western Anbar — had been retaken from the international terrorist group the previous month.

Haditha, known for its Jughayfa tribe and fierce tribal fighters as well as a massacre of civilians by US Marines in November 2005, and an attempted coverup later subjected to a lengthy investigation, never fell to the international terrorist group.

A fighter from a local Sunni Popular Mobilization Unit (PMU) in the region who did not want to be named told Al-Monitor July 8, “Four fishermen had been killed in the attack by three IS in a pickup truck.”

The mayor of Haditha said that five others were injured in the attack, which occurred about 200 kilometers (124 miles) northwest of Baghdad.

The most prominent sheikh of the dominant Jughayfa tribe in Haditha, Sheikh Awwad, told Al-Monitor in a WhatsApp exchange that the IS fighters who attacked the fishermen had “fled but are located in the Jazeera area in underground tunnels. They receive supplies and fuel via the Haditha lake opposite from Reyhana.”

Reyhana is a town that is administratively part of modern Anah. Ancient Anah was located nearby but was flooded under an artificial lake created by the Haditha Dam. The dam is the second-largest hydroelectric contributor to Iraq’s power system after the Mosul Dam and was completed in 1987.

During the 2017 fight to retake Anah, Reyhana was the hardest area, local fighters involved in the battle had told Al-Monitor at the time, due to the concentration of IS foreign fighters. It was heavily damaged in the battle and by airstrikes as appeared in reporting from the town afterward.

The Jughayfa sheikh said that he believed IS fighters were the ones sabotaging power lines in Anbar.

In early July, IS claimed responsibility for improvised explosive device attacks targeting Iran-aligned armed groups on the road between Qaim and Akashat, allegedly killing one and wounding two others.

The small town of Akashat, mainly known for its phosphates quarry and uranium ore production facility, is in an area running alongside the Syrian border south of Qaim to near Rutba under the control of the PMU and difficult to access for anyone not associated with them. Al-Monitor has on previous trips to western Anbar been refused access to this area.

Armed groups believed to be linked to Iran have in recent weeks intensified attacks on bases hosting US-led international coalition forces as many power lines as well as energy imports from Iraq’s eastern neighbor have been cut amid suffocatingly high summer temperatures.

Some have posited that Iran-linked groups are behind the multitude of attacks on power lines and facilities in recent weeks. Given Iran’s concurrent halt to energy supplies for Iraq, they claim it may be a way for Iran and groups linked to it to apply pressure on Iraq.

The largest danger to both local forces and international ones on the ground no longer seems IS, some security sources in Anbar contacted by Al-Monitor said, despite continuing but sporadic attacks targeting local fighters, security forces and others.

Rocket and drone attacks have targeted the Ain al-Asad base, which hosts international forces, in the Sunni-dominant western Anbar region, at least four times in just over a month — June 6, June 20, July 5 and July 7.

After the latest attack, coalition spokesman Col. Wayne Marotto tweeted that two “personnel sustained minor injuries. Damage still be assessed” and noted that, “At approx. 12:30 PM local time, Ain Al-Assad Air Base was attacked by 14 rockets. The rockets landed on the base & perimeter. Force protection defensive measures were activated.”

Marotto told Al-Monitor in response to emailed questions that the Iraqi Security Forces (ISF) and “coalition believe these rockets were fired by outlaw militia groups,” and that Defense Ministry spokesman Maj. Gen. Yehia Rasoul had “released a statement calling the perpetrators terrorists and enemies of the Iraqi state,” while Joint Operations Command spokesman Maj. Gen. Tahseen al-Khafaji had said, “The rocket attack violated Iraqi sovereignty and put in harm’s way Iraqi civilians and troops from the ISF and Coalition.” The Iraqi Security Media cell tweeted that some of the rockets at the launch site were not shot at the base and ended up exploding, damaging local homes and a mosque.

Marotto said, “Due to operational security, we don’t provide details of where we place force protection systems or operational details of force protection.” He added, “We want to ensure there is not a resurgence of Daesh [IS]. Both groups — outlaw militia groups and Daesh — are a threat to the mission of OIR, to defeat Daesh.”

Iraqi officials including Prime Minister Mustafa al-Kadhimi frequently refer to groups believed to be close to Iran and in any case conducting attacks on Iraqi territory against facilities and convoys connected with the international coalition as “outlaw” groups.

Marotto stressed, “The U.S./Coalition has the inherent right to self-defense. The Coalition is not attacking outlaw militia groups — they are attacking us. U.S. strikes against threats are in collective defense of the U.S. and Coalition forces and our Iraqi partners.”

He continued, “It is the outlaw militia groups and Daesh whom do not want stability, security and economic prosperity. They want aggrieved people full of anger and no hope so its violent extremist ideology fills the void. CJTF-OIR continues to be committed to developing the capacity and capability of the Iraqi Security Forces in the defeat of Daesh. The recent attacks are a significant distraction from the defeat Daesh mission.”

The coalition has been steadily drawing down its forces in Iraq over the past year. Most are now stationed at either Ain al-Asad or Erbil in the Kurdistan Region of Iraq, in the northern part of the country.

The local tribal PMU fighter from Anbar quoted above noted that in his opinion the attacks on the coalition base in the province were by groups linked to Iran, but they had been “created by the United States” — in the process of “giving our country to them.” He asked that his name be withheld as Iran-linked groups are “a danger to my life. They control all Iraq now.”

Sheikh Awwad warned that attacks on Ain al-Asad were likely to “increase in the coming period,” stressing that this was due to a lack of response and/or deterrence measures, and that it is still not clear who exactly is carrying out these attacks.

He concluded that the western part of Anbar province near the border with Syria “is still an area under the influence of the PMU,” and that “this is an issue for the Iraqi government,” especially as the PMU — many with historic or current links to Iran — “control the border crossings.”