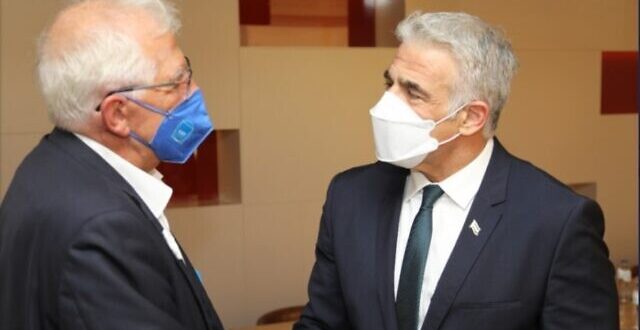 Foreign Minister Yair Lapid met with Josep Borrell, the European Union’s high commissioner for foreign affairs, during a visit to Brussels on Sunday as Israel looks to boost relations with the bloc.

“We spoke about the importance of ties between Israel and the European Union, especially on the economic front,” tweeted Lapid following the meeting. He added that he thanked Borrell for the invitation to address the Foreign Affairs Council on Monday.

The Foreign Ministry declined to comment further on the meeting.

Lapid arrived in Brussels on Sunday, a day ahead of his planned address. He will address 26 EU foreign ministers in his speech to the council, becoming the first Israeli to do so since Tzipi Livni did so in 2008.

Ties between Israel and the EU, and Borrell in particular, have frequently been tense amid allegations of bias toward the Palestinians. Last month Israel reportedly boycotted a visit by the EU peace envoy over Borrell’s lack of support during the recent fighting against Gaza terror groups.

Earlier Sunday, Lapid met with Egyptian Foreign Minister Sameh Shoukry for an hour-long talk focused on Israeli-Palestinian relations. Shoukry emphasized the need to launch peace negotiations and break the impasse between the sides.

The two diplomats discussed ongoing attempts to rehabilitate the Gaza Strip, and Lapid stressed the issue of Israeli prisoners being held by Hamas in Gaza.

On Monday, Lapid is slated to hold a private meeting with NATO Secretary-General Jens Stoltenberg, in addition to bilateral talks with several of his European counterparts.

The visit to Brussels marks Lapid’s fourth trip abroad since taking office almost one month ago. Last week he briefly visited Jordan to meet his counterpart, Ayman Safadi. Last month he traveled to the United Arab Emirates to inaugurate Israel’s Embassy in Abu Dhabi, and also made a brief trip to Rome to meet US Secretary of State Antony Blinken and other officials.