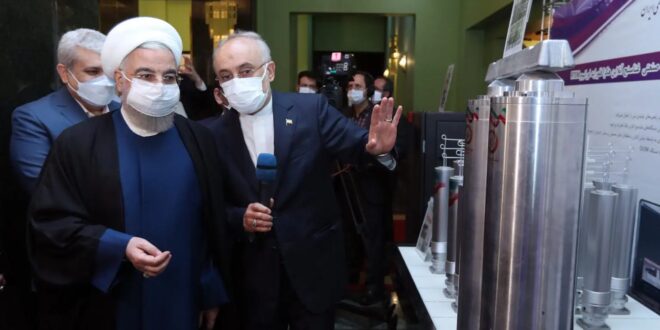 On July 6, the International Atomic Energy Agency (IAEA) reported that Iran was moving ahead with manufacturing “uranium metal enriched to 20 percent U-235 [uranium’s most fissile isotope],” the latest in a series of steps violating Iran’s commitments under the Joint Comprehensive Plan of Action (JCPOA). While Tehran maintains that there is little for the international community to be concerned about—its ambassador to the IAEA pointed to benefits for producing radiopharmaceutical treatments—European and US officials are not convinced. The production of enriched uranium metal, which can be used in the core of nuclear weapons, could have serious nonproliferation implications and adds a complication to already-laborious negotiations in Vienna aimed at restoring the JCPOA.

The five permanent members of the UN Security Council and Germany negotiated the JCPOA in 2015 to address mounting concerns over Iran’s nuclear program. In these negotiations, Tehran agreed to restrict its nuclear activities and allow inspections and monitoring of its facilities in exchange for relief from international sanctions. But it began downgrading its compliance with the deal’s nuclear limits in 2019, citing the US decision, under then president Donald Trump, to pull out of the agreement a year earlier and launch a “maximum pressure” campaign of crushing sanctions that both denied Tehran many of the promised benefits of the 2015 deal and contributed to severe economic hardship.

Tehran steadily expanded stockpiles of enriched uranium, raised enrichment rates, and stepped up research and development, all while underscoring its willingness to reverse all of what it called “remedial measures” if and when the deal was fully revived. The breaches broadened and deepened in line with a law that Tehran enacted following the killing of a senior Iranian nuclear scientist in November 2020, allegedly by Israel. The new law includes a requirement for uranium metal production—an action banned until 2031 under the JCPOA. Tehran informed the IAEA on December 16 that it planned to begin research and development and, within a month, was setting up equipment at the Fuel Plate Fabrication Plant in Isfahan with a view to completing the first step in a three-stage process by mid-2021.

On January 16, the three European parties to the JCPOA—France, Germany and the United Kingdom—issued a joint statement sounding the alarm on these plans. The statement argued that there was “no credible civilian use for uranium metal” and that the move carried “potentially grave military implications”—a reference to their possible application toward nuclear weapons development. The IAEA subsequently confirmed that Iran had indeed in early February begun the production of uranium metal, though still unenriched.

It was around this time that Trump departed and the Biden administration took office in the United States, with the goal of reentering the 2015 agreement and, on that basis, reversing Iran’s escalating nuclear activity. Over the past three months, it has engaged in six rounds of indirect negotiations with the Iranians aimed at restoring mutual compliance with the deal, with the stated aim of using a revived agreement as prelude to wider talks on non-nuclear concerns. The latest round of talks concluded on June 20, and as of yet there is no start date for the seventh. Thus far, however, even though Iran is indirectly talking to the United States, it is not decelerating its nuclear activities, while the US sanctions architecture remains largely in place.

In mid-April, following what Foreign Minister Javad Zarif described as an act of “reckless sabotage” at the Natanz Fuel Enrichment Plant that knocked out some of the facility’s centrifuges by blowing up the center’s power supply, again with suspected Israeli involvement, Iran ramped up the rate of uranium enrichment to an unprecedented 60 percent—a sharp jump from the 20 percent it initiated at the start of the year and well beyond the JCPOA’s 3.67 percent cap. This brings it much closer to weapons grade, which is above 90 percent. It has also been less than cooperative with the IAEA over monitoring and verification authorities that provide enhanced inspections of its facilities, without which the agency would be, in the words of its director general, “flying blind.” This has further strained relations between Tehran and the agency, which are already edgy over a prolonged and still-inconclusive safeguards probe into activities of concern at undeclared facilities that Iran has failed to explain.

These factors—Iran’s continued nuclear build-up and its less-than-forthcoming level of cooperation with the UN’s nuclear watchdog, as well as its failure to indicate when it intends to pick up the negotiations in Vienna after a nearly three-week hiatus as the outgoing Rouhani administration enters a lame duck period—serve as backdrop to the news that Iran had started enriching uranium metal. Paris, London, and Berlin immediately expressed “grave concern,” describing the move as “a key step in the development of a nuclear weapon” and warning that “Iran is threatening a successful outcome to the Vienna talks.” The US State Department called it “another unfortunate step backward” and called on the Iranians “to stop this brinksmanship.”

As with other breaches of the nuclear deal, uranium metal production poses two distinct but interrelated concerns. The first is the manner in which Iran’s overall nuclear capabilities are qualitatively and quantitatively growing. Notably, larger stockpiles and higher enrichment are cutting the time needed to accumulate enough fissile material for a single nuclear weapon; Secretary of State Antony Blinken has noted that this “breakout time” has dropped from one year when the JCPOA was fully in place to “a few months at best”—and could fall further still if present trajectories continue. The second worry is that even if the JCPOA’s restraints are successfully reset on physical infrastructure, Iran will have acquired technical know-how that cannot be undone, now extending to enriched uranium metal development. Western officials have been mindful of this long-term conundrum, and it remains to be seen whether and how negotiations in Vienna try and account for the advances that have accumulated over the past two years.

In terms of immediate implications, the United States, France, Germany, and the United Kingdom remain committed to the principle of JCPOA restoration, and Iran’s announcement in and of itself will likely not derail their interest in seeing the talks resumed and concluded. Even so, the gaps between the two sides remain significant. For the Western powers, each new step Tehran undertakes in breach of the deal adds another issue that must be addressed if the JCPOA’s nonproliferation gains are to be fully restored. Moreover, these are not the only sticking points that must be addressed on the way to a revitalized JCPOA: Washington also wants Tehran to commit to follow-on negotiations on a “longer and stronger” nuclear deal. The Iranians, meanwhile, are demanding the full lifting of sanctions put in place during the Trump administration’s “maximum pressure” era, as well as “assurances” that the United States, having unilaterally exited the JCPOA once despite Iran’s compliance, will not pull out of the agreement a second time—though US diplomats counter that “there is no such thing as a guarantee.”

In an optimistic assessment, stepping up uranium metal activity is merely Tehran’s latest gambit to show that it will push on with its declared nuclear activities until the two sides find a satisfactory diplomatic arrangement, at which point it will roll back this and other violations in return for a sufficiently robust degree of sanctions relief. But a more sobering scenario is one in which what both sides are willing to offer falls short of what the other expects, and Tehran, contending not just with international negotiations but also with a domestic presidential transition, is increasingly less inclined to compromise. If the latter proves to be the case, a JCPOA that seemed on the cusp of a new lease on life after three years of steady attrition could receive a final blow, with all the accompanying uncertainty on what comes next and the risks that it entails.

Post Views: 335
Previous Democracy in Afghanistan: Amid and Beyond Conflict
Next Iran and South Caucasus Railway Connections after the Nagorno-Karabakh War