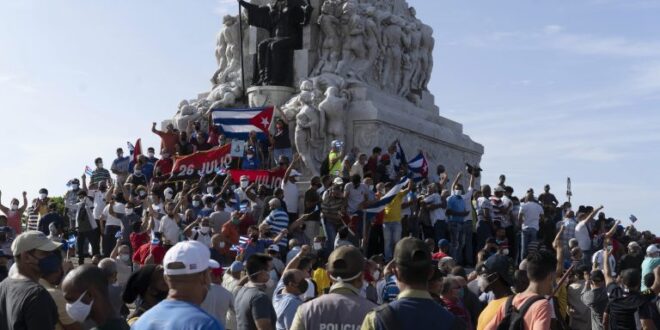 Protests Roil Havana as Cubans Push Back Against the Regime

Thousands of Cubans have taken to the streets this week to organize some of the largest protests seen in the country in decades.

Videos circulating on social media show Cuban security forces violently beating protesters before detaining them and hauling them off to prison.

Demonstrators rallied against declining living conditions, a lack of goods and government services, and shortages of food, fuel, electricity, and medicine.

U.S. President Joseph Biden expressed support for the protesters, noting that “We stand with the Cuban people and their clarion call for freedom…”

Thousands of Cubans have taken to the streets this week to organize some of the largest protests seen in the country in decades. Many of the demonstrators called for freedom from Cuba’s Communist government, which reacted in a predictably draconian fashion, attempting to muzzle the voices of protesters and activists by cutting off communications throughout the country. Prior to the communications blackout, Cubans were circulating videos of protests on social media. The use of cell phones and social media have ensured that protests spread throughout the country, as demonstrators called attention to their demands, even as their compatriots were rounded up and arrested. The government also called for supporters to “defend the revolution” in reference to the 1959 uprising that ushered in Cuba’s Communist rule. The government placed the blame for growing unrest on the United States. Cuban President Miguel Díaz-Canel, who succeeded Raúl Castro in 2018, accused Washington of pursuing a policy of “economic asphyxiation” of the Cuban people for its long-running trade embargo and sanctions regime. Blaming mysterious outside agitators for instability is a favored tactic of regimes from Latin America to the Middle East. Moreover, as the first non-Castro president since 1976 and the first leader of the government who is not a Castro since 1959, Díaz-Canel lacks the same degree of political legitimacy as his predecessors, Castro brothers Fidel and Raúl. Fidel ruled Cuba from 1959 to 2008, and Raúl from 2008 until April 2021 when he stepped down.

Cuban security forces detained over 100 people, including well-known dissidents, human rights activists, and members of Cuba’s opposition movement. The authorities used rubber bullets and tear gas to break up protests throughout the country and established checkpoints using police SWAT units. Videos circulating on social media show Cuban security forces violently beating protesters before detaining them and hauling them off to prison. Many activists are now considered missing, with little information available on their whereabouts. Longtime Cuba-watchers expect the government to continue its heavy-handed response and escalate violence as a means of quelling the protest movement. So far, protesters have not been cowed or intimidated by the authorities’ measures. Pictures of the late Fidel Castro were desecrated at some of the protests, while in others, police vehicles were destroyed. Looting and vandalism occurred in some parts of the country, a mix of criminal opportunism and pure desperation driven by hunger and survival amid Cuba’s worst economic crisis in decades.

Reflective of other protests that have ebbed and flowed in Latin America over the past several years, demonstrators rallied against declining living conditions, a lack of government services, and shortages of food, fuel, electricity, and medicine, including antibiotics, aspirin, and penicillin. Social and economic challenges have been exacerbated by the COVID-19 pandemic, with inflation soaring, making the cost of basic goods prohibitive for regular citizens. Tourism to Cuba has been hampered by COVID-19, depriving the country of a vital source of revenue. Combined with fiscal mismanagement and longstanding American sanctions, Cuba is suffering from a dearth of foreign currency, a worrisome factor that can foreshadow government failure. The protests are from cross-cutting sections of society and not, as in years past, merely relegated to intellectuals, or from the country’s political opposition. By most accounts, the current protests are the most serious challenge to the Cuban government since the collapse of the Soviet Union in the early 1990s, when Havana lost its most important patron and longtime Cold War ally.

Mexico’s President Andrés Manuel López Obrador called on the United States to suspend the blockade against Cuba on humanitarian grounds. There are now growing concerns that Cuba could begin spiraling out of control in a manner similar to another communist nation in Latin America, Venezuela, Havana’s closest ally in the region. U.S. President Joseph Biden expressed support for the protesters, noting that “We stand with the Cuban people and their clarion call for freedom and relief from the tragic grip of the pandemic and from the decades of repression and economic suffering to which they have been subjected by Cuba’s authoritarian regime.” Praise for Cuban protesters was generated across the aisle in the U.S., a rare bipartisan agreement between Democrats and Republicans, and perhaps reflective of the growing importance of the politically influential Cuban diaspora in American politics.