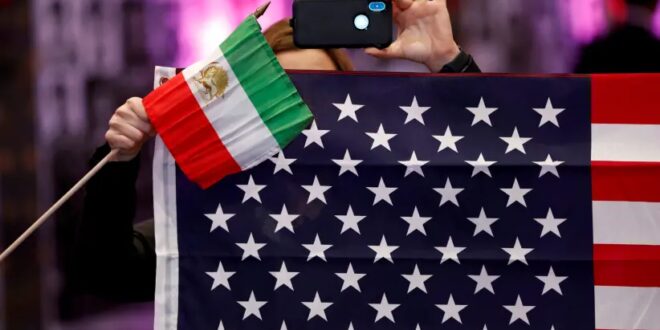 US: Iran ‘deflecting blame’ for not returning to nuclear deal

Washington and Tehran have been engaged in indirect negotiations in Vienna since April to return to the JCPOA, the nuclear agreement between Iran and world powers reached in 2015.

Iran is trying to avoid responsibility for not returning to its nuclear deal with world powers, the US State Department said on Saturday night.

The State Department responded to tweets from Iran’s chief nuclear negotiator and Deputy Foreign Minister Seyed Abbas Araghchi, in which he said the indirect talks with the US on a return to the Joint Comprehensive Plan of Action would be delayed.

The US and Iran have been engaged in indirect negotiations in Vienna since April to return to the JCPOA, the nuclear agreement between Iran and world powers reached in 2015. The sides participated in six rounds of talks, the last of which ended last month, stopping the negotiations indefinitely.

The US, under then-president Donald Trump, left the deal in 2018, opting for a “maximum pressure” sanctions campaign, meant to deter the Islamic Republic. Current US President Joe Biden seeks to return to the agreement, which sets limitations on Iran’s nuclear activity in exchange for the gradual lifting of sanctions on the regime; Biden argues it is the best way to prevent Iran from attaining a nuclear weapon. Israel opposes the JCPOA on the grounds that its nuclear restrictions expire in 2030, giving it an international imprimatur to develop a nuclear weapon, that does not stop Iran from its malign actions in the region, such as proxy warfare, nor does it address Iran’s ballistic missiles program.

“Vienna talks must thus obviously await our new administration,” Araghchi tweeted. “This is what every democracy demands.”

While Iran holds regular elections for president, the candidates must be approved by Iran’s Supreme Leader, who holds the power in Iran and is not subject to elections. In addition, Iranians do not have the basic rights characteristic of modern democracies, such as free speech, or freedom of assembly.

Araghchi accused the US and UK of tying the return to the JCPOA to the status of their nationals held hostage in Iran.
“US and UK need to understand [the presidential transition in Iran] and stop linking a humanitarian exchange – ready to be implemented – with the JCPOA. Keeping such an exchange hostage to political aims achieves neither,” Araghchi wrote.

The Iranian negotiator claimed that 10 prisoners could be released the following day “if US and UK fulfill their part of the deal.”

US Special Envoy for Iran Rob Malley tweeted a statement from US State Department Spokesman Ned Price several hours later, calling Araghchi’s tweets “an outrageous effort to deflect blame for the current impasse on a potential mutual return to compliance with the JCPOA.”

“We stand ready to return to Vienna to complete work on a mutual return to the JCPOA once Iran has made the necessary decisions,” the statement reads.

As for the American hostages in Iran, the US said the remarks are “just another cruel effort to raise the hopes of their families.

“Araghchi speaks of us taking an agreement hostage when it is his government that has been unjustly detaining four innocent Americans for years,” the State Department added. “There is no agreed deal yet on the matter of the detainees. And if Iran were truly interested in making a humanitarian gesture, it would simply release the detainees immediately.”

The hostages are a top priority for the US, which is willing to continue talking about the matter even if negotiations in Vienna are on hold, the US stated.

The four US citizens known to be held in Iran are environmentalist Morad Tahbaz and businessman Emad Shragi, as well as Siamak Namazki – the longest-held American, imprisoned since 2015 – and Baquer Namazi, 84, his father, who the regime lured to Iran to visit his son.