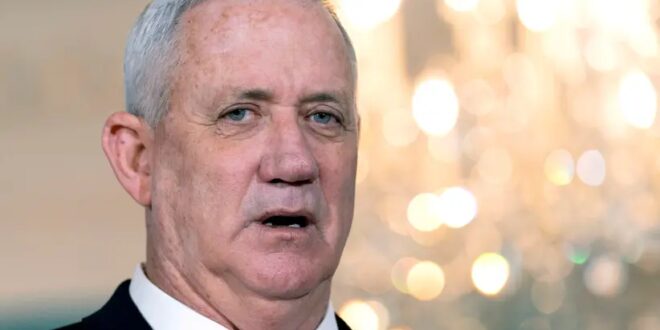 “We should not push America to fight for us,” the defense minister said. “Iran is a regional and global problem.”

Defense Minister Benny Gantz denied a report in The New Yorker on Saturday night, telling Channel 12: “I don’t know of this story and I assume this is not what happened,” adding that he would have known of such a move.

According to the report, former prime minister Benjamin Netanyahu pushed former US president Donald Trump to carry out a military strike on Iran after he lost the 2020 presidential election to President Joe Biden.

With Trump desperate to stay in power, Joint Chiefs of Staff chairman Gen. Mark Milley worked to prevent the president from ordering the strike, warning him that “if you do this, you’re gonna have a f***ing war.”

Noting that Washington certainly has its own considerations when striking Iran, Gantz stressed that “we should not push America to fight for us. Iran is a regional and global problem.”

Israel considers Iran’s nuclear program go be its number one security concern. In a speech last Wednesday during the graduation ceremony for Israel’s National Defense College, Gantz called for Israel to step up preparations should Iran get close to obtaining a nuclear weapon.

“Against the greatest threat – Iran arming itself with a nuclear weapon – we have no choice but to expand our force build-up, to continue to rely on our human capital and to adapt our capabilities and our plans,” the defense minister said.

On Saturday night, Gantz reiterated that in meetings with American political and military officials, he stressed that Israel will keep its independence regarding its security vis-a-vis Iran.

Touching on the crisis in Lebanon, Gantz said that what is happening to the country is a tragedy.

“Lebanon is a country with tremendous potential for tourism, trade and economy. What is happening is a tragedy – a tragedy because of Hezbollah. We have offered to help the country twice – once after the explosion in Beirut and the second time a few weeks ago.”

Violence and protests have been breaking out around the country as basic services collapse from an economic crisis that the World Bank says is one of the world’s worst since the 1850s.

The IDF has been monitoring the situation and is ready to deploy reinforcements to its northern border should Hezbollah attack Israel from there. In the 15 years since the last war, both Israel and Hezbollah have significantly increased their capabilities, which will cause untold damage and cause significant casualties to both sides.

Nevertheless, the military believes that the terrorist group’s leader Hassan Nasrallah is too concerned with internal issues to begin a war with Israel.

On Saturday night, Gantz echoed the military’s assessments, saying that because of the disintegration of Lebanon, “Hezbollah would find it very difficult to attack Israel.”

Post Views: 40
Previous Has Iran launched a new stealth missile boat?
Next US: Iran ‘deflecting blame’ for not returning to nuclear deal