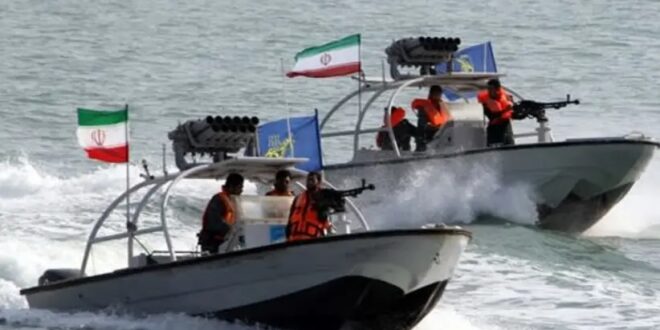 A new Iranian ship is one of several under construction that will be called the Shahed Soleimani class of stealth ships.

Iran has launched one of its new stealthy catamaran “missile corvettes” according to open-source intelligence analyzed by expert H.I. Sutton, who runs the Cover Shores website. He noted that this took place as many have been distracted by monitoring the Iranian Makran warship which is sailing close to the UK this week.

Meanwhile, a new boat was put to sea in recent weeks. “The boat, which is a large stealthy catamaran design, was launched at a yard on Qeshm Island between June 27 and July 2,” Sutton noted. This ship is described as one of several under construction that will be called the Shahed Soleimani class of ships. At 65-m. long, it will apparently wield anti-ship missiles and air defense.

Back in April, a satellite image from Planet Labs, also analyzed by Sutton, noted that it included the third of Iran’s new catamarans designed for this class of ships. “This little-known shipyard near the Straits of Hormuz is linked to the IRGC and has been massively expanded,” he wrote.

This is not the first catamaran the Iranian navy has put to sea. According to Thomas Newdick at The Drive, the US Navy has released video of an IRGC ship called the Shahid Nazeri harassing US ships back in April. “The Shahid Nazeri is a larger catamaran-type, high-speed design that appears to be armed with a 20 mm. cannon and has a helipad on top of its rear deck,” he noted. Commissioned in 2016, the ship is 55-m. long and participated in a drill with the Russian and Iranian navies. It is based in the city of Bandar Abbas, along the Persian Gulf.

Catamaran designs for naval ships are relatively rare. There are exceptions, such as the HSV-2 Swift that was once leased to the US Navy and then leased to the UAE. Under a UAE flag, it was attacked by Iranian-backed Houthis in 2016. Another catamaran-style vessel is the US Sea Fighter FSF-1, an experimental Littoral Combat Ship.

The US has a series of other larger LCS ships, twice the size of the new Iranian missile boat. Washington has also experimented with the stealth Sea Shadow catamaran. Indonesia has built a futuristic designed Klewang-class trimaran which is 62-m. long. Turkey has also looked into building a multi-role trimaran vessel.

Iran’s navy also looked at a trimaran design back in 2018 which it intended for coastal warfare. It was to be 100-m. long.

Sleuths online have found photos and images of the new Iranian catamaran and also the shipyard that was expanded to build several of them. It remains to be seen how they will be used. Given Iran’s interest in harassing US ships and spreading its influence to the shores of Yemen, the ship may help Iran project its power in coastal and nearby waters. The satellite images from early July appear to show that Iran has launched at least one of these new ships.

Iran’s navy is widely considered not strong, and it has suffered many accidents, including one ship that burned and sank recently. Iran’s Islamic Revolutionary Guard Corps has a huge number of fast boats, some of which now operate UAVs.