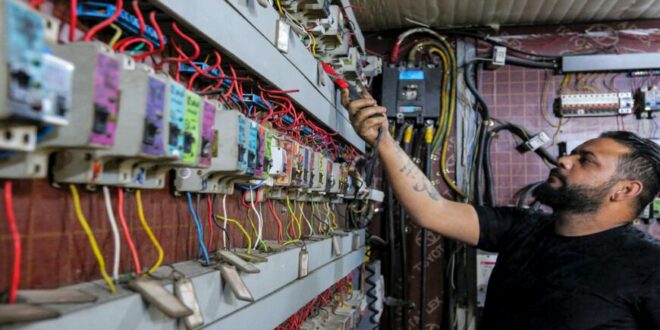 Iran’s dilapidated gas infrastructure has limited its transfers to Iraq, adding to Iraq’s own energy crisis.

Iraqi parliamentary sources said on July 21 political conflicts are “preventing the investment of natural gas in the Mansouriya field in the Diyala governorate (north of Baghdad). The field’s resources are enough to meet all of Iraq’s needs.”

Iran cut off fuel supplies from Iraq on July 2. Later, on July 6, the Iraqi Electricity Ministry said Tehran had expressed its willingness to resume pumping oil to Iraq.

While Iraqi energy specialists argue Tehran has a strong influence on the energy supply sector in Iraq through gas fuel, history indicates supply disruptions are not something new.

In 2018, the disruption in supply deprived the Iraqi electricity network of 2,500 megawatts of power, as the country relies heavily on Iranian fuel to operate its power plants.

While some pundits believe Iran is cutting off fuel supplies from Iraq to politically pressure Baghdad in the standoff between Tehran and Washington in the country, others consider the disruption in supplies could be the result of technical problems.

In fact, on July 7, a power outage in Iran angered citizens.

Hamza al-Jawahiri, an engineer and oil expert in the Iraqi Oil Ministry, told Al-Monitor technical issues were behind the disruption in oil supplies.

“Iran is no longer a reliable source of fuel for Iraq, especially since Iran itself is currently unable to meet its local needs,” Jawahiri said.

“One of the reasons why Iran is unable to meet Iraq’s needs in fuel according to the agreement between the two countries is the fact that it is under US sanctions. Therefore, Iraq can’t pay for its fuel supplies in US dollars, which is a major problem that is difficult to solve,” he added.

Jawahiri suggested that Iraq “could reduce reliance on Iranian fuel through good management of power generation and distribution across the country.”

“Fuel prices are rising due to the improvement in global oil prices. Importing fuel has become more expensive. This is not to mention that national stations are not in need of fuel only, but also of crude oil, at a time when crude oil prices have reached nearly $75 per barrel,” he said.

Salih believes the “use of fuel in power production in Iraq is still the cheapest option and an economic advantage. Numbers indicate Iraq needs approximately 6,000 million standard cubic feet of fuel to achieve sufficiency in power production, the biggest part of which is imported from Iran.”

Meanwhile, Zahra al-Bajari, member of the Parliamentary Oil and Energy Committee, said “reliance on imported fuel from Iran is the reason behind the collapse of the energy sector in Iraq, in addition to targeting energy towers.”

She accused the “power and oil ministries of lacking coordination to organize fuel supply to the country’s stations.”

The spokesperson for the Electricity Ministry, Ahmed Moussa, told Al-Monitor, “Iran supplies limited fuel quantities to Iraq. Tehran, however, was understanding of the need to increase the demand for electric power and was keen on increasing its supplies to Iraqi production stations.”

Assem Jihad, spokesperson for the Oil Ministry, told Al-Monitor, “Iran supplies Iraq with some 750 million standard cubic feet of fuel per day needed to feed stations in Basra and Baghdad.”

“The Electricity Ministry imported fuel-operating stations at the time, but since Iraq does not have sufficient quantities, it had to import,” he added.

Jihad noted “the Oil Ministry’s local production capacity is 1,500 million standard cubic feet, which is enough to supply power stations along with millions of liters of other fuel types.”

“Getting equipment is also affected by payment of debts owed to Iraq, which have not been settled yet to the US restrictions on Iran,” he added.

Jihad stressed “there are no alternatives to Iranian fuel at the present time. In case there was a decrease in the Iranian fuel supplies, the Oil Ministry would provide fuel alternatives to all stations, including kerosene and other fuel derivatives,” considering “fuel is one of the many problems causing electricity shortages.”

Ihsan al-Shammari, director of the Baghdad-based Center for Political Thought, told Al-Monitor, “It’s been many years since Iraq has been unable to build power stations and failed to produce and invest in fuel. Iraq was also keen not to associate itself with neighboring countries when it comes to fuel, and all of this was based on political calculations.”

“Iran looks at Iraq from an economic benefit point of view. Iran is already under sanctions, and it would not be in its best interest to have other countries supply fuel to Iraq. By supplying fuel to Baghdad, Tehran obtains hard currency and empowers its allies inside Iraq,” Shammari said.