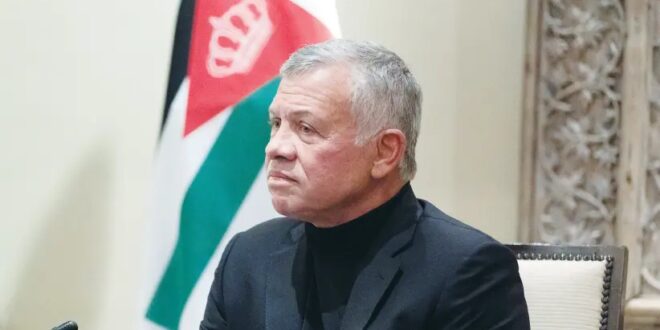 Jordan cannot become the state of the Palestinians, King Abdullah II, the Hashemite Kingdom’s monarch, told CNN’s Fareed Zakaria in an interview which aired Sunday, while he was in Washington.

“Jordan is Jordan,” Abdullah said in response to a question about Israeli right-wing proposals to resolve the Israeli-Palestinian conflict by transforming Jordan into a Palestinian homeland. It’s a scenario that appears plausible to the Israeli Right, given that a majority of Jordanians are ethnically Palestinian.

Abdullah, however, emphatically nixed the idea, describing his country as one with “a mixed society from different ethnic and religious backgrounds.”

Throughout the interview he underscored the importance of a two-state resolution to the Israeli-Palestinian conflict. Jordan’s vision for that plan is two states based on the pre-1967 lines, in which east Jerusalem and all of the West Bank would be within the final borders of a Palestinian state.

The Biden administration also supports a two-state resolution but has focused on preserving the option for such a plan without embarking on any initiative for the direct talks necessary to bring that option to fruition. Abdullah said it was important not to forego the two-state solution, warning that the only other option was a one-state solution.

In that scenario, he asked, “what are you going to do. Are you going to push all the Palestinians out of their homes in the West Bank and create instability on the other side [Jordan,]?”

He referenced his meeting last Monday with US President Joe Biden at the White House. He was the first leader from the Middle East to sit face-to-face with Biden, who has been in office since January.

Prior to that meeting, Abdullah told CNN he had held separate talks with Palestinian Authority President Mahmoud Abbas and with Israeli Prime Minister Naftali Bennett and Defense Minister Benny Gantz.

According to Israeli reports, Abdullah and Gantz met in secret in February in an attempt to boost the latter’s chances of besting former Prime Minister Benjamin Netanyahu in the election but no reports had surfaced about a Gantz-Abdullah meeting since the new government headed by Prime Minister Naftali Bennett was sworn in. Abdullah also spoke of a meeting with a prime minister, but it was unclear if he was hinting at the secret meeting held earlier this month between him and Bennett.

At the top of his mind, Abdullah said, was the question of how to “get people back to the table” to restart talks frozen since 2014 even though the new government headed by Bennett was not “the most ideal” for a peace process.

Abdullah said he also wanted to improve ties between his country and Israel, which had “not been good.” It was a reference to the poor relations that had existed between the Hashemite Kingdom and Netanyahu.

The king added that he came out of meetings with the Israeli and Palestinian officials feeling “very encouraged.”

“I think we’ve seen, in the past couple of weeks, not only better understanding between Israel and Jordan, but the voices coming out of both Israel and Palestine that we need to move forward and reset that relationship,” Abdullah told CNN.

This was important because the 11-day Gaza war in May was a “wake up” call with respect to the perils, both domestically and regionally, of ignoring the Palestinian issue.

He specifically mentioned ethnic violence between Jews and Arab-Israelis during the war, also known as Guardian of the Walls.
“Since 1948, this was the first time I feel that a civil war happened in Israel. When you look at the villages and the towns, Arab-Israelis and Israelis got into conflict,” said the king.

“If they lose hope and, God forbid, [there is] another cycle, the next war is going to be even more damaging,” warned Abdullah. “There were no victors” in this last Gaza war, he said.

The king said the war also served to warn the four Arab countries who had normalized ties with Israel under the US brokered Abraham Accords, the United Arab Emirates, Bahrain Morocco and Sudan.

Arab countries “looking at their national security interests” see a relationship with Israel as being “in their vested interest, “ Abdullah explained.

“That war was a reality check to all of us that even though the Abraham Accords may expand, you cannot do it at the expense of the Israeli-Palestinian dialogue, he said.

On a separate note, he warned about the economic crisis in Lebanon, saying that “the bottom would fall out” there within weeks.