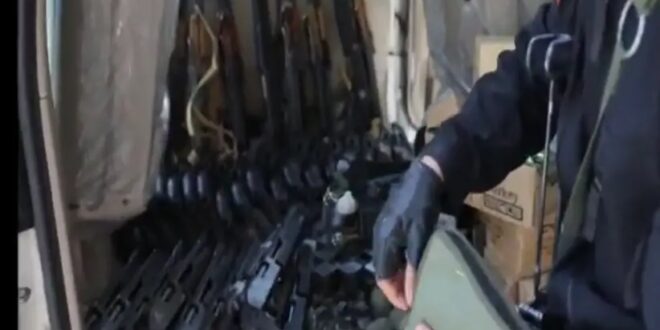 The ministry claimed that the alleged agents intended to use the weapons in order to carry out assassinations.

Iran’s Intelligence Ministry claimed that it has arrested a network of Mossad agents and seized a heavy shipment of weapons and ammunition after they entered Iran through its western border, according to Fars News Agency.

The ministry claimed that the alleged agents intended to use the weapons during the ongoing protests taking place throughout Iran in order to carry out assassinations and that Israel attempted to carry out “acts of sabotage” in various places during the recent presidential elections.

The ministry stated that the Mossad network in the area was “hit hard” after Iran managed to thwart the alleged sabotage attempts.

The seized weapons included pistols, grenades and shotguns, according to the ministry, which added that some of the weapons have been used to “provoke clashes” during protests.

The Intelligence Ministry thanked the people of Iran for their “constant vigilance” and called on all citizens to be more vigilant and aware of “suspicious offers,” especially on the Internet.

The announcement comes as protests continue across Iran for a third week in light of a severe drought and water crisis in southwestern Iran, and the day after anti-government protests broke out in Tehran.

A video shared on social media showed protesters marching down the streets of the capital on Monday shouting slogans such as “Death to the dictator” and “Neither Gaza nor Lebanon: I will sacrifice my life for Iran.”

Additionally on Tuesday, the Islamic Revolutionary Guard Corps (IRGC) announced that it had killed two “terrorists” and captured another in the West Azerbaijan province in northwestern Iran. The IRGC claimed that the three member team planned to carry out “sabotage and anti-security measures,” according to Fars.

Three additional suspects who intended to protect the “terrorists” were also arrested, according to the report. A “considerable amount” of weapons, ammunition and explosives were seized in the arrest, according to Fars.

“Takfiri” is a term used by Iran and pro-Iranian groups to refer to hard-line, Islamist militants.

The Judiciary Office added that the group had released a number of video clips on the Internet to spread terror and declare their existence. The office did not state what the name of the group was or where exactly its leaders are located.

“The group intended to carry out simultaneous terrorist operations in several provinces of the country which was plotted with the intelligence and financial cooperation of two intelligence services of the European countries and certain regional states but they were thwarted, thanks to the vigilance of judicial officials,” said the head of the Judiciary Office, according to Fars.