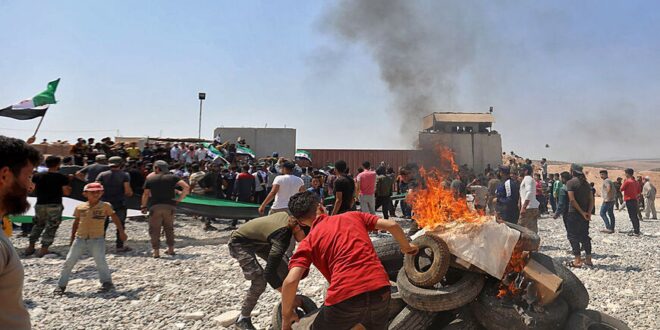 Hayat Tahrir al-Sham leader has recently boasted about his group’s growing weapons arsenal and military capabilities, as the Syrian government forces escalate their attacks on Idlib.

The commander of Hayat Tahrir al-Sham (HTS), which controls Syria’s northwestern province of Idlib, Abu Mohammed al-Golani, ruled out a ground attack by the Syrian government forces on Jabal al-Zawiya, in the southern Idlib countryside, although he expected an escalation of the shelling.

During a meeting with a group of media professionals in Idlib July 23, Golani said, “We have fortified Jabal al-Zawiya and the rest of the fronts. We are ready for all scenarios and are able to thwart any enemy attack. We have improved our fighting skills, especially in terms of night fighting, and we have acquired new, advanced weapons, but we will not reveal them just yet.”

He noted, “The military factions have organized their forces within a joint operations room, and this gives us additional strength. We are ready to start the battle under the right circumstances, and we have responded to the bombing of Jabal al-Zawiya by targeting the enemy’s artillery positions and operations rooms.”

Golani continued, “HTS has ties with many revolutionary factions in the northern countryside of Aleppo, and we have no intention of entering those areas, which are controlled by the Free Syrian Army [FSA]. We believe the Turkish presence is a bonus but we should rely on ourselves. The decision of peace or war is ours to make. We have sent three brigades to Jabal al-Zawiya in case of any developments, but that’s unlikely at the moment.”

Capt. Khaled Majd, an FSA leader residing in Idlib, told Al-Monitor, “HTS has great military potential and has seized a lot of weapons from the [opposition] factions. The group can start a battle, albeit a limited one. HTS is claiming to own advanced weapons to raise the morale of its fighters. The truth is that no new qualitative weapons have entered Idlib. Meanwhile, HTS will only fight back if the regime attacks, but it cannot instigate an escalation against the Syrian regime on its own.”

Mustafa al-Noaymi, a Syrian journalist residing in Idlib, told Al-Monitor, “I do not believe the Syrian revolution factions are in the process of opening new battles against the regime forces, and the factions are committed to the Turkish-Russian understandings. They only react in self-defense, but at the same time they have the political ability to impose some military responses according to the rules of engagement, and what is happening in the Jabal al-Zawiya area and the vicinity of Saraqib is proof.”

He said, “The factions still depend on the many military vehicles and equipment they seize from the Syrian regime forces and their allies. If the Russian air force intervenes by launching raids against the factions in preparation for a ground offensive by the regime, then fierce battles would break out and the factions would suffer heavy losses. This is particularly true in light of the military power and the logistical capabilities available to the regime axis.”

Speaking about Golani’s threat to the government forces, Noaymi said, “The revolutionary discourse in general is based on psychological warfare on the regime’s axis. [This discourse] also comes in response to video excerpts broadcast by the Syrian regime in which it threatens the factions. At the same time, it is a warning message to the foreign militias fighting alongside the Syrian regime.”

He added that HTS possesses relatively advanced weapons and can cause losses in the ranks of the government forces, especially through the American anti-armor weapon TOW. If the regime opens a battle without Russia’s approval, the opposition may use the Turkish unmanned combat aerial vehicle Bayraktar, which would quickly change the equation in favor of the opposition factions.

Noaymi stressed that the Turkish military presence in Idlib may have given a message to the allies of the Syrian government, whereby Turkey is present and able to open a battle if the government tries to bypass the political agreements reached between Turkey and Russia.

On the other hand, an HTS field leader nicknamed Abu Omar al-Halabi, who resides in Idlib, told Al-Monitor, “HTS is preparing for any upcoming battle, and we have the military capacity that enables us to confront the regime, especially in night fighting, which was our biggest weakness in the past, as the regime was able to advance at night in battles in late 2019 and early 2020 because we did not have night weapons.”

He noted, “HTS is coordinating with the factions, especially the FSA factions within Al-Fateh Al-Mubin operations room. We do not want to start a battle against the regime now, but if it attacks our areas, we will open new axes to fight it.”

Post Views: 104
Previous Egypt to press for arrest of Sisi outspoken critic Mohamed Ali
Next The EU Is Upping the Ante on Rule of Law Abuses in Hungary and Poland