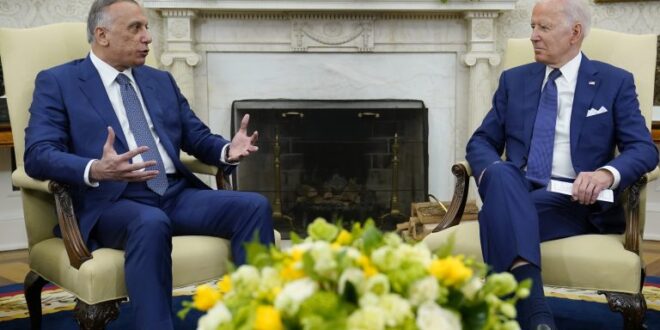 On July 26, Iraq’s Prime Minister Mustafa al-Kadhimi made his second visit to Washington to discuss the presence of U.S. forces in Iraq as part of the fourth and final round of the U.S.-Iraq Strategic Dialogue series. President Biden and Prime Minister Kadhimi announced that the U.S.-Iraq combat mission in Iraq would culminate by the end of 2021, with U.S. forces transitioning to a “training and advisory role.” The U.S. also agreed to provide $5.2 million to help fund a United Nations mission to monitor Iraq’s October elections and ensure their integrity amid fears of security threats. In advance of Kadhimi’s meeting with President Biden, senior Iraqi officials met with their American counterparts on “key areas of shared interest including through education, health, cultural, energy, and climate initiatives,” according to White House spokesperson Jen Psaki.

Still, security issues, and in particular the threat posed by Iran-backed militias to Kadhimi’s government, were reportedly central topics in the U.S.-Iraq meetings. In high-level U.S.-Iraq meetings prior to 2019, the joint fight against the Islamic State was the focus of the bilateral security agenda. Despite the collapse of the organization’s self-proclaimed caliphate in 2019, it remains active enough to conduct bombings in Iraqi cities, such as the explosion in Baghdad’s predominantly Shia Sadr City district on June 30, in which thirty-five Iraqis were killed and dozens wounded. The deterioration of Islamic State forces has led many—including Iranian leaders—to believe that the group no longer poses an existential threat to the Iraqi government, whose forces some consider capable of successfully combating the extremist group without much U.S. military assistance.

The July 2021 U.S.-Iraq meetings shifted the joint security agenda from the Islamic State to the issue of Iranian influence in Iraq. Iran arms and advises several Shia militias that exist outside the formal Iraqi chain of command and that seek to implement Tehran’s policy objectives. Despite numerous counterattacks by the Trump administration, and some kinetic responses since President Biden took office, Iran-backed militias remain largely undeterred. Even with Prime Minister Kadhimi’s efforts to rein in powerful militia groups—which have included arresting militia commanders on terrorism charges and raiding weapons storehouses—militias continue to periodically attack U.S. forces and installations in an effort to drive U.S forces out of Iraq. Pointedly, a militia group conducted a drone attack on an Iraqi base housing U.S. troops just days before the Kadhimi-Biden meeting.

While the specific number of U.S. troops that might be withdrawn was not announced following the Biden-Kadhimi meeting, the justification for keeping some American forces in Iraq remained, at least publicly, about helping Iraqi forces prevent an Islamic State resurgence. However, the rationale for the mission transition is clearly to shrink the U.S. military “target set” available to attacks by the Iran-backed Iraqi militias. Yet, Iranian leaders and their Iraqi allies—who claim that the presence of U.S. troops is to counter Iran, not threats from the Islamic State—insist on a full U.S. withdrawal, even as they interpret the partial U.S. drawdown as an indicator that their strategy to put military pressure on the U.S. and Iraqi governments is succeeding.

The U.S. statements that accompanied the Strategic Dialogue emphasized the many dimensions of the U.S.-Iraq relationship, suggesting that the Biden administration sees strengthening the writ and effectiveness of the Iraqi state as key to reducing Iranian influence in the country and throughout the region. Strengthening the Iraqi state requires improving Iraqi governance; building a common sense of nationhood among the many sects and ethnicities in Iraq; reducing official corruption; promoting the rule of law, civil society, independent journalism and government oversight; and diversifying Iraq’s economy. However, U.S. programs to empower the Iraqi state have had mixed results to date. It remains unclear if U.S. dedication to state-building efforts will continue at sufficient levels as the U.S. military mission in Iraq is downsized. At the same time, Iranian influence in Iraq, which extends to Iraq’s economy and religious life as well as security issues, is unpopular among Iraqi citizens. Highlighting some of the detrimental effects that Iran has on the lives of Iraqis and support for improved Iraqi governance will be important factors in diminishing Iran’s influence and ensuring that the Iraqi government can deliver for its people. In the long term, and given the legacies of the U.S.-led wars in Iraq, such an approach will likely prove more effective than a U.S. strategy based on kinetic action.

Post Views: 69
Previous Shockwaves in Tunisia as the Country is Upended by a Political Crisis
Next The Evolution of the Global Jihadist Movement from a One-Headed Monster to a Hydra