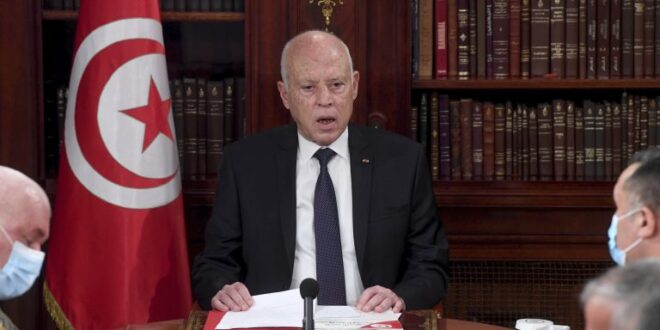 Growing countrywide protests over quality-of-life issues, including worsening health and the economic crises, have upended Tunisia’s political system. Tunisia has been ravaged by COVID-19, its healthcare system besieged by the scale and scope of the pandemic. A lackluster vaccination campaign outraged Tunisians and led to the dismissal last week of the country’s health minister (only 7% of Tunisians have received the vaccine, according to data from Johns Hopkins University). Fallout from the pandemic has driven Tunisia into its worst recession since it achieved independence in 1956, exacerbating pre-existing struggles with high unemployment, widespread poverty, and ballooning national debt. In response to violent demonstrations that occurred over the weekend, Tunisia’s president Kais Saied, who was elected by an overwhelming majority in 2019, suspended parliament and fired the prime minister, Hichem Mechichi, with whom he has had longstanding differences. Mechichi is supported by Ennahda, a moderate Islamist party and the largest party in Parliament, and President Saied’s opponents have accused him of staging “a coup against the Tunisian democracy and its constitution.” Following the dismissal of Mechichi and the suspension of parliament, many citizens frustrated by years of political dysfunction cheered and celebrated in the streets. Saied cited Article 80 of the Tunisian constitution in support of his actions, claiming exceptional powers to make executive decisions. Khaled Yahyaoui, Director General of the Presidential Security unit and Saied’s political ally, was placed in charge of the Ministry of Interior.

The political crisis in Tunisia has been building for months, and the uncertainty around what happens next has many concerned about the country’s future. Tunisia has experienced fits and starts since its transition to democracy just over a decade ago, particularly struggling to jumpstart the economy and making little progress in reforming state institutions, including the security services. Powerful labor unions have been outspoken in their opposition to austerity measures that would accompany a $4 billion loan from the International Monetary Fund backed by Mechichi. Initial widespread optimism about Tunisia as a positive example of democracy in a post-Arab Spring North Africa makes the political shakeup that much more devastating. Tunisia’s longtime dictator Zine el-Abidine Ben Ali was sacked following Arab Spring protests in 2011. However, concerns have been growing over the authoritarian nature of Saied and murmurings that he may attempt to use unrest to consolidate power. For months, Saied refused to swear in nearly a dozen new ministers, leading to accusations that he was overstepping his authority. Just last week, Saied fired his health minister and gave the Tunisian military control over the country’s COVID-19 response following a failed walk-in vaccination campaign and a spike in infection rates. Rached Ghannouchi, Speaker of Parliament and a leading Ennahda political figure, also labeled Saied’s actions as a coup. Ghannouchi and other party leaders were blocked by the army from entering parliament, and street clashes flared on the outskirts of the building. In the capital of Tunis, police made several arrests and fired tear gas at groups of protesters.

Despite mounting criticism of the government in recent months, Saied has maintained significant support from the Tunisian population in public opinion polls, and many Tunisians supported the dissolution of parliament. Politicians from around the globe have weighed in on the situation, with German Foreign Ministry spokesperson Maria Adebahr offering hope that Tunisia would return “to constitutional order as quickly as possible,” while Turkey’s foreign ministry said it was “deeply concerned” over recent developments, calling for a return to “democratic legitimacy.” Ankara has been a supporter of Ennahda and similar political Islamist movements in the Middle East and North Africa.

Reports that police raided Al Jazeera offices in Tunis have sparked fears of an authoritarian crackdown and attempts to control the media. The echoes of what occurred in Egypt are difficult to ignore, and Saied’s critics accuse him of trying to emulate Egyptian President Abdel Fatah al-Sisi, who led a 2013 military coup that overthrew the democratically elected Muslim Brotherhood leader Mohammed Morsi. President Sisi has since cracked down on dissent in Egypt and been accused on numerous occasions of human rights abuses. The current unrest in Tunisia is the most serious since the protests in the summer of 2013, and a potential harbinger of things to come. The fallout could involve spillover effects, including in neighboring countries such as Algeria and Libya. Some observers have suggested that foreign entities could have played a role in Saied’s attempt to consolidate power, hinting at the possible role of the United Arab Emirates. Former Tunisian president Moncef Marzouki, one of the political leaders who helped shepherd Tunisian democracy in the years after the Arab Spring, lamented that the country “made a huge leap backward” and is “back to dictatorship,” adding that he feared recent could devolve “into an even worse situation.”