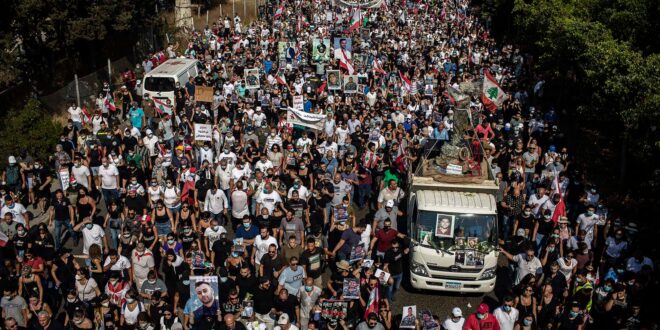 How to Pull Lebanon out of its Torturous Fall

Ahead of next year’s legislative elections, international accountability and public engagement will be key to countering endemic corruption.

A year after the horrific Beirut port explosion on August 4, 2020, the legal pursuit of justice and accountability is proving pointless. Little to no progress has been made, due to how deeply embedded corruption is in the country’s political and business structures. The upcoming legislative elections next year could be an opportunity to set the country on a reform track — but only if they are managed by an independent body under international supervision.

Last August, Beirut was rocked by one of the largest non-nuclear blasts in history, killing more than 200 people and injuring thousands more. A year on, and despite the magnitude of the incident, Lebanese authorities have yet to reveal the full circumstances that led to such large-scale destruction, or to identify the culprits.

During a session in July, parliament refused to lift the immunity of former ministers. Other security commanders were not interrogated because their line ministers refused to grant the judge authorization to do so.

Meanwhile, leaked information about the incident and the early stages of the investigation has brought to light the complex nature of responsibilities. The story begins with the “unintended” docking of a ship carrying 2,750 tonnes of ammonium nitrate from Georgia to Mozambique in Beirut’s port. Then came the judiciary’s decision to impound the ship; the inappropriate and hazardous storage of the shipment; and the mystery around the origin of the spark.

Regardless of whether the explosion was accidental or criminal, the import and storage of the shipment reflects a combination of incompetence, corruption and impunity among ministers, senior security officers, bureaucrats and judges. It comes in the context of obsolete legislation, complex administrative procedures and cumbersome decision-making processes. As most of the stakeholders benefit from this multifaceted ambiguity, the hope for an intrinsic reform effort is next to nil.
Severe Economic Crisis

To be sure, corruption is not exclusive to Lebanon, nor is it a new phenomenon for the country. But eight decades after independence was awarded, without much of a fight, the scale and depth of corruption are epic. For some time, there has been a debate over whether this astronomical corruption and impunity is political or social; today, it is clear that it is a blend of both.

Corrupt practices in Lebanon are not limited to the public sector. There are stunning stories of monopoly, fraud, nepotism, cumshaws, shady dealings and other unscrupulous acts in the private sector as well, including — but not limited to — the health sector, lawyers, private banks, private educational institutions and others.

The most recent example is how private banks, together with some politicians, killed the recovery plan put forth by the government in 2020 as part of discussions with the International Monetary Fund (IMF) about a potential bailout to address the country’s severe economic crisis.

Notwithstanding the divergent opinions about the technical aspects of the plan, one key principle in it would have established that the losses of the banking sector over the last decade would be distributed among several segments (banks’ shareholders, middle and large depositors, the central bank, etc.). Instead, the Association of Banks in Lebanon (ABL) lobbied the political elite, both in government and in opposition, to put the lid on the plan, stalling discussions with the IMF and jeopardizing Lebanon’s chances to benefit from international assistance.

The ABL suggested the scandalous option of selling Lebanon’s public assets to cover the losses. As such, poor investment decisions — lending money knowing it will never be repaid — go unpunished.
Uphill Battle

As this case and others prove, it is inconceivable to envisage any durable impact from changing laws alone. It is equally impossible to work on long-term social change initiatives that foster the values of transparency and accountability, while the political landscape is occupied by a ring of political and business leaders who have too many mutual interests, and who never refrain from using leverage to serve these interests at the expense of the public good.

Whatever route one takes, it will be an uphill battle to deal simultaneously with the laws, the people and the values. But this is what it will take to put Lebanon on some sort of a path toward recovery.

A first step could be the planned legislative elections in 2022, but two conditions must be met for this public consultation to be relevant. Firstly, the election should be managed by an independent body under international supervision. The traditional toothless electoral observation mission commissioned by the international community will not do the job, resulting in the same politically correct findings as in previous elections.

Secondly, people must be aggressively encouraged to “vote for integrity,” irrespective of the ideological or political affiliations of a candidate. A high turnout is essential to containing the powerful electoral machines of the ruling elite.

While a sweeping change in the political landscape is not possible even with the best elections, the above conditions would facilitate parliamentary access for a number of reform-minded candidates. This could kickstart Lebanon’s overdue and long recovery process. Otherwise, the country will continue its torturous fall into a bottomless pit, with dreadful implications reverberating across the region.