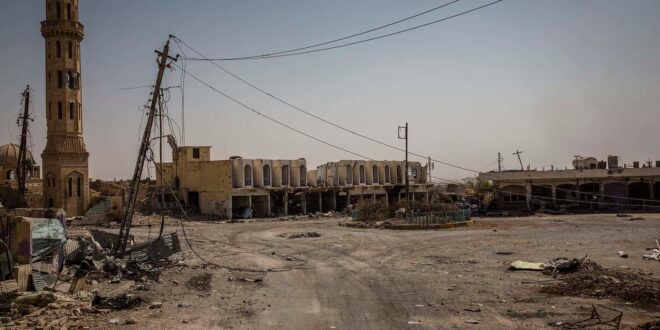 What can help allay perceptions of marginalization and tension in the district?

Iraq is a country beset by a host of political, security, economic and social challenges, including addressing the human legacy of the Islamic State’s (ISIS) rampage through the country just a few years ago. Almost four years after the liberation of Nineveh’s Tal Afar district from ISIS control, feelings of marginalization, neglect and exclusion persist among communities in the region, epitomizing how such feelings have driven ethnic and sectarian tensions and conflict in post-2003 Iraq. Recognition of these sentiments and an understanding of the factors underpinning them, can help communities in the district allay these drivers of tension and move forward together.

Tal Afar is Nineveh governorate’s second most populated district after Mosul, with Shia and Sunni Turkmen, Sunni Arab and Kurdish communities spread across the sub-districts of Tal Afar Center (Turkmen), Al-Ayadhiya (Sunni Turkmen, Sunni Arabs and Kurds), Rabia (Sunni Arab) and Zummar (Sunni Arab and Kurds). Iraq’s post-2003 political system institutionalized ethno-sectarian identity as the main political marker, with each community receiving a portion of the political pie based on their demographic and political weight, shifting power away from the old regime (Sunni Arab) toward Shia and Kurdish actors.

This fact, combined with other measures — de-Baathification, centralization of power, competition over territories disputed by the Government of Iraq (GoI) and the Kurdistan Regional Government (KRG), and corruption and patronage, among others — entrenched exclusive sociopolitical and economic processes.

Tal Afar is a microcosm of these dynamics. Power shifted toward the district’s Shia Turkmen, exacerbating feelings of neglect among other communities, especially Sunni Arabs and Turkmen, who benefited more from the old regime. Shia Turkmen became better positioned to engage the new political system formed in Baghdad — which was dominated by parties representing Shia interests — and came to control the new local level governing institutions.

This provided fodder for non-state actors and extremist groups to exploit grievances to gain community support along ethno-sectarian lines in the district and advance parochial interests. Sunni extremist groups, first al-Qaida then ISIS, preyed on these feelings by drumming up cause to protect against the new political order.

Simultaneously, Zummar sub-district was listed in Article 140 of the constitution as one of 14 areas contested by the GoI and KRG. Competition for control produced distorted governance outcomes, further fueling feelings of discontent and division. After liberating areas from ISIS, the KRG took direct control over Zummar, Rabia and parts of Al-Ayadhiya. Kurds in Zummar were perceived to have benefited most from the KRG’s takeover. After its retreat in the wake of the KRG independence referendum, Zummar, Rabia and Al-Ayadhiya reverted back to GoI control, except for a small stretch in Rabia and Zummar.
Findings and Analysis from the Conflict Stabilization and Monitoring Framework

The sub-district with the highest feeling of marginalization is Zummar, where over half of respondents report feeling neglected. The competition for the area’s control has meant that formal and informal governance institutions have been skewed to benefit some over others.

The fact that Turkmen-led Popular Mobilization Forces currently dominate Tal Afar’s security, especially in Zummar, and that that KRG still controls villages near the Syrian border, is reflected on the communal level. Arabs in Zummar feel more marginalized than their Kurdish neighbors; blame local governing actors much more; feel much less represented in the district’s security configuration; and believe service delivery in the sub-district to be more unequal. Arabs there turn to the Iraqi army to report a security incident, whereas Kurdish residents reported turning to KRG-leaning security institutions such as Peshmerga and local police.

The legacy of ISIS is also a contributing factor to this perceived marginalization. In Al-Ayadhiya, Turkmen and Arab communities list being collectively blamed or accused of a crime (i.e., perceived ISIS affiliation) as a top concern. Moreover, they report being judged more negatively than counterparts in other sub-districts due to actions of others within their ethno-religious group, and report higher levels of restriction on movement than other groups.

District power dynamics also highlight variations in feelings of marginalization. The Turkmen community (both Sunni and Shia) is the largest demographic group in the district. Although sectarian cleavages exist, historical family bonds mean that ethnic identity carries weight. Sectarian divisions do not appear to impact the Turkmen view. Indeed, the community views several issues much rosier than Tal Afar’s Sunni Arabs and Kurds — indicating that ethnic identity can supersede sectarian affiliation depending on the issue. Turkmen as a whole view essential service delivery to be delivered more equally, the state to be much more present, and financial advancement to be significantly easier than Sunni Arabs and Kurds.

In Rabia sub-district, only a small minority of residents feel neglected. This low perception of neglect may stem from local civil and military authorities there including members from the Shammar tribe, the largest and most influential tribe in the sub-district. It may also stem from respondents reporting that 85 percent saying their essential needs were met in the CSMF’s wave 4, up from 42 percent in wave 3.

Irrespective of sub-district, residents of rural areas report feeling neglected at nearly double the rate of urban communities. These residents rank local authorities, NGOs/international community and the central government in that order on who to blame for their marginalization. This difference may stem from the fact that public employment, service provision and humanitarian aid tend to be more concentrated in urban centers.
Recommendations

The disputed status of Zummar, ISIS’ legacy, poor services and district power dynamics are some of the key factors that help explain variations in perceived marginalization among communities in Tal Afar. What can help to ally these feelings and reduce major drivers of tension in the district?

Support inter-community and community-government reconciliation efforts. Some efforts to help address feelings of exclusion in Tal Afar include three local peace and reconciliation agreements since August 2018 — in Tal Afar Center, Al-Ayadhiya and Zummar. These agreements found consensus on how to address drivers of conflict. In regard to the legacy of ISIS, the agreements differentiated between those who supported ISIS and those who were innocent, overcoming concern over collective punishment — an accusation prevalent within the Sunni community. The agreements also tried to overcome ethno-sectarian divisions and discrimination through emphasizing a national collective identity, better application of rule of law and more inclusive decision-making processes.

In the cases of Tal Afar Center and Al-Ayadhiya, the agreements also call on the provincial and central government to help stabilize and develop these areas. A majority from these areas believe political leaders encourage identity divisions to gain support, indicating a growing divide between communities and their political representatives. Specifically, Sunni and Shia Turkmen put governance neglect and corruption high on their list of issues upsetting them, and their perception is that provincial and central government authorities have purposely neglected Tal Afar — one of the poorest districts in Nineveh — due to Turkmen being the largest demographic group there but a minority nationwide.

This feeling also extends to sectarian identity: because the provincial council is dominated by Sunni Arab and Kurdish influence, many from the community feel Tal Afar is not properly resourced or administered by Mosul, the provincial capital, due to the large number of Shia in the district, and Shia Turkmen highlight that services are better in Sunni areas. This explains why some Turkmen Shia leaders called for Tal Afar to become its own province, which would allow there to be a direct budget allocation from Baghdad and a governor who would likely come from the Turkmen community. For their part, Sunni Arabs, Kurds and some Sunni Turkmen fear that their minority status would be magnified in a Shia Turkmen-dominated province. Sunni Arabs also fear that the call to turn Tal Afar into a province stems from a deeper motive by Shia political parties to break-up provinces where they are the majority, which would dilute their political influence nationally.

These local agreements offer an entry point to allay tensions linked to exclusion and should continue to be supported by international actors and national authorities to ensure full implementation.

Reduce the impact of Zummar’s disputed status through enhanced GoI-KRG cooperation. Due to ongoing competition between the GoI and KRG, both have eschewed long-term investment or development efforts. Rather, patronage and clientelism have characterized governance in the sub-district. Actors aligned with either patron have vied for territorial, administrative and electoral control to swing the area in their favor, pending the status of Article 140. Yet the article’s implementation anytime soon remains slim, so local feelings of neglect can be addressed through minimizing the impact of Zummar’s disputed status.

One positive step would be to have the GoI and KRG agree to a Zummar pact similar to the example of the October 2020 Sinjar Agreement. Discussion can center on expanding the membership of local police; allowing IDPs from areas held by the KRG to return to their villages; and agreeing to resolve housing, land and property disputes stemming from the conflict with ISIS and Ba’athist Arabization. It could also promote the principal of political inclusivity to ensure that both sides and their respective political leaders as well as civic and independent movements and actors do not feel they are being targeted by the agreement, a lesson from the Sinjar experience.

Post Views: 94
Previous As China Poses Challenges, Europe Makes its Presence Known in the Indo-Pacific
Next How to Pull Lebanon out of its Torturous Fall