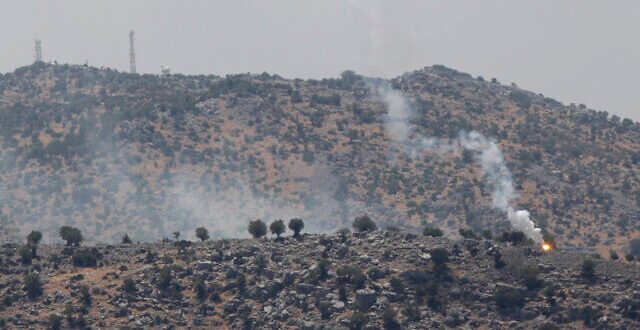 Israel is preparing a wide range of military and covert responses to a barrage of 19 rockets fired at Israel on Friday by the Hezbollah terror group, a defense official said, noting that the severity will depend on how the situation develops.

“The Israel Defense Forces has in recent days taken action with large-scale strikes in Lebanon, mostly with artillery and with strikes on infrastructure with fighter jets, as we haven’t done for years,” the official said in a statement.

“The defense establishment is preparing additional options for a response through different means — overt and covert — in accordance with developments [in the field]. The continuation of our activities will be in accordance with operational needs and a timeframe that is best suited for Israel,” the official added.

The UN peacekeeping mission in Lebanon, known by its acronym UNIFIL, said the situation was “very dangerous” and that the rockets launched at Israel were fired outside of its area of operation in southern Lebanon.

“This is a very dangerous situation, with escalatory actions seen on both sides over the past two days,” UNIFIL said in a statement.

“UNIFIL is actively engaging with the parties through all formal and informal liaison and coordination mechanisms to prevent the situation from spiraling out of control,” the mission added.

Nineteen rockets were fired into northern Israel from Lebanon on Friday morning, sending residents in a number of towns in the Golan Heights and Galilee Panhandle scrambling to shelters.

The Israel Defense Forces said 10 projectiles were intercepted by the Iron Dome missile defense system and six landed in open areas around Mount Dov. Another three rockets failed to clear the border and landed in Lebanese territory, according to the military.

The Iran-backed Hezbollah terror group confirmed it had fired the projectiles on Friday, which it said came in response to recent Israeli airstrikes in Lebanon. “The Islamic Resistance shelled open areas near the Shebaa Farms with dozens of 122mm rockets,” it said in a statement carried in Arabic-language media, referring to the Mount Dov area.

Hezbollah later released a video of the rocket launches.

The barrage was the heaviest fired at Israel by Hezbollah since the 2006 Second Lebanon War.

Israel responded with artillery strikes. Witnesses reported artillery fire by Israeli forces on the Lebanese side of Shebaa Farms and outside the town of Kfar Shouba.

The attack sparked tensions between locals and Hezbollah. Videos circulated on social media after the rocket attack showing two vehicles, including a mobile rocket launcher, being stopped by villagers in the southeastern village of Shwaya in Hasbaya region near the border with the Golan Heights.

Some angry villagers, who belong to the Druze sect, could be heard saying: “Hezbollah is firing rockets from between homes so that Israel hits us back.”

Hezbollah later issued a statement saying that the rockets were fired from remote areas, adding that the fighters were stopped in Shwaya on their way back.

“The Islamic Resistance was and will always be most keen about the safety of its people and avoiding any harm to them through its acts of resistance,” the statement said.

The Lebanese army said it arrested the four people who had launched the rockets and seized the rocket launcher after it was intercepted by villagers.

Thursday’s early morning airstrikes were in response to a previous rocket attack from Lebanon on Wednesday.

Gantz held an earlier meeting with Kohavi and other senior officers, with a statement from his office saying he stressed “the importance of maintaining close contact and providing the home front with ongoing updates.”

The Defense Minister also spoke with mayors of northern border communities and asked them to remain in close contact with the military.

“The incident shows Hezbollah is deterred, as it fired at open areas,” Kochav added.

He also asserted Hezbollah intentionally fired the rockets at open areas and not at Israeli towns or communities. Still, the Iron Dome system was activated to intercept some of the rockets, which is usually only done when projectiles are heading for populated areas, military bases or key infrastructure.

Recent attacks had been blamed on local Palestinian groups in Lebanon, and not the powerful Hezbollah. However, Hezbollah maintains tight control over southern Lebanon, making it unlikely that such attacks would be conducted from this area without at least its tacit approval.

On Wednesday, three rockets were fired into northern Israel from Lebanon. Two rockets hit open areas, while the third fell short of the border.

In response, the Israel Defense Forces fired artillery shells at targets in Lebanon just after the attack. Some two hours later it followed up with a second and a third round before conducting airstrikes toward “terror infrastructure” and rocket launching sites, according to the military.

“Without getting into the identity of who shot the rockets, it’s clear that the Lebanese government bears full responsibility for any fire at the State of Israel’s territory,” the IDF said in a Hebrew-language statement. “The Lebanese state lacks control over terror groups operating within it.”