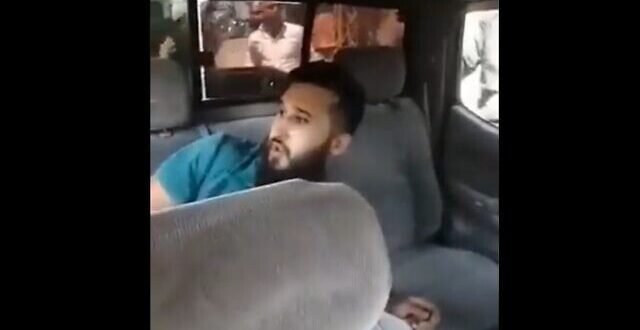 Druze residents in a southern Lebanese village halted the Hezbollah crew with its rocket launchers that had fired into Israel on Friday, and detained its members until the Lebanese Army arrived, according to media reports and video footage.

The group stopped a truck-mounted multiple launch rocket system as it drove through the village of Chouya, the video footage showed.

Some angry villagers could be heard protesting: “Hezbollah is firing rockets from between homes so that Israel hits us back.”

Others converged on one of the Hezbollah members in the truck, shouting, “Who are you, you dog?”

Hezbollah later issued a statement saying that the rockets were fired from remote areas, adding that the fighters were stopped in Shwaya on their way back.

“The Islamic Resistance was and will always be most keen about the safety of its people and avoiding any harm to them through its acts of resistance,” the statement said.

The Lebanese Army later arrived to confiscate the rocket launcher seen in the video and said it arrested four suspects involved in the rocket fire. Media reports said four Hezbollah members were detained.

Reports indicated that the rocket launchers mounted to the vehicle stopped by residents in Chouya were used in the earlier attack, and some of the barrels appeared to be empty.

Nineteen rockets were fired at the Golan Heights and Galilee Panhandle from Lebanon on Friday morning, the Israel Defense Forces and Hezbollah both said.

The IDF said 10 projectiles were intercepted by the Iron Dome missile defense system and six landed in open around Mount Dov. Another three rockets failed to clear the border and landed in Lebanese territory, according to the military.

The Iran-backed Hezbollah terror group confirmed it had fired the projectiles, its heaviest barrage since the 2006 Second Lebanon War, which it said came in response to recent Israeli airstrikes in Lebanon. “The Islamic Resistance shelled open areas near the Sheba Farms with dozens of 122mm rockets,” it said in a statement carried in Arabic-language media.

“The incident shows Hezbollah’s deterrence, as it fired at open areas,” Kochav added.

He also asserted Hezbollah intentionally fired the rockets at open areas. Still, the Iron Dome system was activated to intercept some of the rockets, which is usually only done when projectiles are heading for populated areas, military bases or key infrastructure.

The UN peacekeeping mission in Lebanon, known by its acronym UNIFIL, said Friday the situation was “very serious.”

“UNIFIL has detected rocket launches from Lebanon and return artillery fire by Israel. This is a very serious situation and we urge all parties to cease fire,” UNIFIL said in a statement.