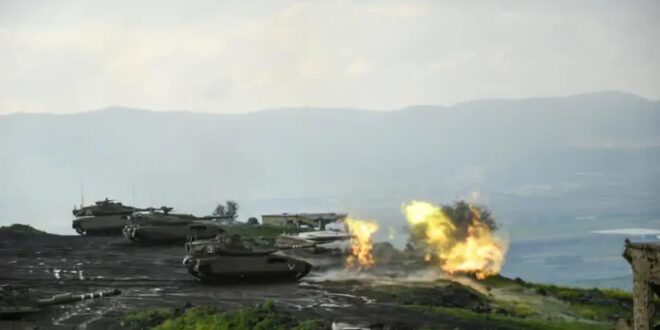 Hamas welcomed the Hezbollah attack and said that it fully supports the “resistance in Lebanon” in its fight against “the Zionist aggression.”

Several Palestinian factions praised Hezbollah over the weekend for firing rockets into northern Israel and vowed to continue launching incendiary balloons from the Gaza Strip.

Earlier on Friday, a heavy barrage of close to 20 rockets was fired from Lebanon into the North, activating the Iron Dome missile-defense system and setting off sirens throughout the area.

The Iron Dome intercepted 10 rockets, with six falling in open areas near Mount Dov on the Lebanese border. The others fell inside Lebanon.

The Coalition of Palestinian Forces in Lebanon, a group representing various Palestinian factions, praised Hezbollah for “targeting Israeli settlements in the occupied Palestinian territories in response to the aggression that targeted Lebanese territories on Thursday.”

In a statement published in Lebanon, the factions expressed full support for Hezbollah’s response and stressed “the right of the resistance to confront the Israeli aggression aimed at imposing new equations or changing the rules of engagement.”

The rocket attack aimed to send “a clear message emphasizing Hezbollah’s natural right to respond to aggression, defend the people and the land and prevent the enemy from achieving its suspicious goals,” the factions said.

The attack came at a time when the Palestinians are “confronting the continuous Israeli aggression in Jerusalem, the occupied West Bank and the Gaza Strip,” they said.

Hamas welcomed Hezbollah’s attack. The “battle with the enemy must continue on all fronts until the liberation of the holy sites and the Arab and Islamic lands,” it said in a statement.

Hamas said it fully supports the right of the “resistance in Lebanon to respond to the Zionist aggression and violations.”

In response to Israeli airstrikes on Hamas targets late Friday, Hamas said those who are firing incendiary balloons from the Gaza Strip into Israel will not be intimidated or deterred.

The IDF said it struck a Hamas military camp and a rocket-launching position in the northern Gaza Strip in response to the launching of incendiary balloons.

The Israeli airstrikes will not “intimidate the rebellious youth or discourage them from continuing to resist the siege on the Gaza Strip,” Hamas spokesman Fawzi Barhoum said.

“The rebellious Gazan youth will not submit to the dictates of the enemy and its attempts to impose equations on the Gaza Strip,” he added.

Another Hamas official, Abdel Latif al-Qanou, called on Palestinians in the West Bank to step up the “resistance” against Israel.

Commenting on the death of Emad Dweikat, a resident of Beita, near Nablus, who was reportedly shot dead during clashes with soldiers on Friday, he said: “The martyrdom of Emad requires the escalation of resistance in all its forms throughout the West Bank in response to the continuous crimes of the occupation against our people. The blood of the martyrs will continue to fuel our people’s struggle against the Zionist occupier.”

“We express our praise and full support for this missile response and affirm the right to resist the occupation and confront the aggression to prevent the enemy from changing the rules of engagement,” it said in a statement.

Another Palestinian terrorist group, the Popular Resistance Movement in Palestine, praised the “bold strike” carried out by Hezbollah against Israel.

“We affirm that this is the best solution to confront Zionist arrogance and repeated attacks on Arab land,” it said, calling for “unity to prevent the Zionist enemy from singling out our Lebanese people.”

Post Views: 100
Previous Bennett: Israel won’t accept rocket attacks from Lebanon
Next Iran believes it has Israel on the run