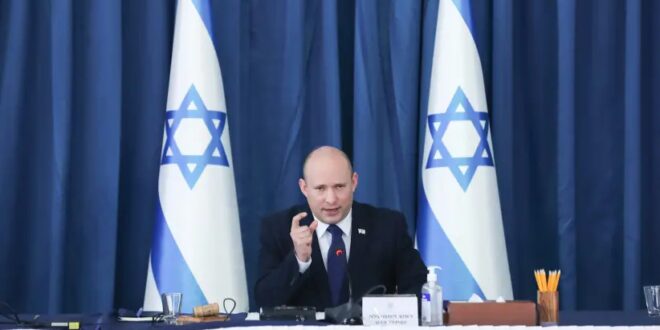 “Israel will not accept shooting into its territory,” Prime Minister Naftali Bennett warned.

Lebanon must rein in the terrorists shooting rockets at Israel, regardless of who they are, Prime Minister Naftali Bennett said at the start of Sunday’s cabinet meeting.

“The State of Lebanon and the Lebanese Army must take responsibility for what is happening in their backyard,” he said, adding that it “is less important to us whether it’s a Palestinian group or independent rebels.”

“Israel will not accept shooting into its territory,” Bennett said.

His remarks came two days after Hezbollah fired about 20 rockets toward Israel. The Iron Dome intercepted 10 of them, six fell in open areas, and the others fell in Lebanon. This was the sixth such attack on Israel in recent months and the first time Hezbollah took responsibility.

The IDF responded by shooting 40 artillery shells at open areas in southern Lebanon.

Iran and Hezbollah were trying to entangle Israel in Lebanon’s economic and political crisis, Bennett said. He praised the “very important awakening” of Lebanese citizens against Hezbollah and Iranian influence in their country.

Marking the 15th anniversary of the Second Lebanon War on Saturday, Hezbollah Secretary-General Hassan Nasrallah called the exchange of fire with Israel a “very dangerous development” and the greatest escalation since the war ended.

Hezbollah, the terrorist group he leads, “did not mean to create new rules of engagement,” he said. Israel was scared to continue attacking Lebanon, Nasrallah said.

UN Secretary-General António Guterres called on all parties involved in the violence near the northern border to “exercise utmost restraint” and to “avoid actions that can further heighten tensions and lead to miscalculation.”
Israeli Ambassador to the US and UN Gilad Erdan called Gutteres’s remarks “unfortunate,” in that he “chooses to draw a moral equivalency between attacks perpetuated by designated terrorist organizations and the law-abiding, democratic State of Israel, which is a member of the UN.”
Hezbollah, Erdan pointed out, commits war crimes by targeting Israeli civilians from within Lebanese civilian areas.
Nabila Massrali, the EU’s spokeswoman for foreign affairs, condemned “the firing of rockets from southern Lebanon toward northern Israel and occupied [sic] Golan Heights” and said the EU was following developments, including Israel’s response.

“It is crucial for all parties to exercise utmost restraint and work toward a quick resolution of the current tensions,” Massrali added.
The US State Department condemned the Hezbollah rocket attack the day it took place and “call[ed] upon the Lebanese government urgently to prevent such attacks and bring the area under its control.”

When asked in a press briefing to comment on the Israeli air raid, State Department Press Secretary Ned Price said: “We have made the point that Israel has the right to defend itself.”

“The recent attacks and growing tensions in the region, exacerbated by Iran’s activities and arming of its proxies, especially Hezbollah, demonstrate once again the urgent need to actively enforce UN Security Council Resolution 1701 (2006),” Erdan wrote. “While Israel is not interested in escalation, we will not allow attacks on Israeli civilians to go unanswered. If these attacks continue, Israel will have no choice but to respond and dismantle Hezbollah’s terrorist infrastructure that threatens Israel’s security and the lives of its citizens.”

At the cabinet meeting, Bennett praised the Group of Seven for condemning Iran over its attack on the Mercer Street ship. He said he was pleased to hear US Central Command’s report on the attack had found, among other things, that components of suicide drones used to attack the ship matched previously found Iranian UAVs.

“Now, the test is in actions, not just declarations,” he said.

Iranian President Ebrahim Raisi – who oversaw the executions of thousands in 1988, earning him the nickname “the hangman of Tehran” – is “a cruel and extremist person even by Iranian standards,” Bennett said. “We see a rise in Iranian aggression throughout the Middle East, on land, in the air and at sea… Iran is a clear danger to regional stability and world peace, and the world cannot accept it. The Iranians must understand they cannot go crazy without paying a price.”

Regarding the Gaza Strip, Bennett said IDF strikes on the Hamas-controlled enclave were meant to send a message that the terrorist group must stop those who launch incendiary balloons into Israel.

“It doesn’t matter if they’re rebels, or people who are bored or any other excuses,” he said. “The responsibility is on Hamas.”
Meretz MK Ghaida Rinawie Zoabi said there would not be a military escalation on either front.

“Bennett knows that if he goes to a military conflict, the coalition will fall apart because Meretz and Ra’am [United Arab List] won’t agree to it,” she told KAN’s Arabic-language radio station. Their “presence limits the sharpness of any military decision; the moment the government makes a decision about something military, there will be a danger to the coalition.”

Israeli fighter jets struck Hamas targets on Saturday in response to the launching of incendiary balloons a day earlier, the IDF said.
The military said it struck a Hamas military camp and a rocket-launching position in Jabalya refugee camp in northern Gaza, adding that it would “continue to respond with strikes to attempted terrorist attacks from Gaza.”

At least four fires broke out in the Eshkol Regional Council on Friday after incendiary balloons were launched from Gaza. Three of the fires were in the Kissufim forest, while the other broke out near the community of Be’eri, according to Keren Kayemeth LeIsrael-Jewish National Fund.