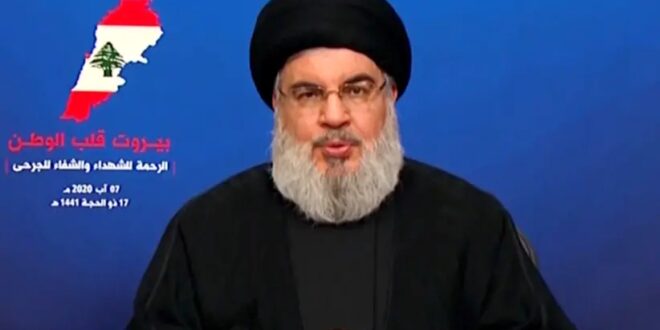 The recent events have been some of the most serious clashes between Israel and Hezbollah since the Second Lebanon War.

Hezbollah Secretary-General Hassan Nasrallah warned on Saturday night that recent clashes with Israel are a “very dangerous development” which has not happened since the Second Lebanon War, a day after Hezbollah fired about 20 rockets towards Israel and the IDF responded with 40 artillery shells towards open areas in southern Lebanon.

Nasrallah delivered the speech, announced days before the rocket fire, on the 15th anniversary of the Second Lebanon War.

Nasrallah added that Hezbollah “intended by the process to reinforce the old rules of engagement, and did not mean to create new rules of engagement.” Nasrallah warned that any new Israeli raid on Lebanon would be responded to “appropriately and proportionately.”

Despite the worsening economic crisis in Lebanon, Nasrallah warned Israel against thinking that Hezbollah is preoccupied with Lebanon’s internal situation. “For us, our responsibilities are clear, which is to protect our people,” said Nasrallah.

The Hezbollah leader stressed that the “most important responsibility on everyone’s shoulders” was to preserve the situation established by the Second Lebanon War and find a balance of deterrence and protective rules of engagement that “guarantee the security and safety of Lebanon.”

Nasrallah stated that no Israeli airstrikes have hit a target in Lebanese territory since the Second Lebanon War, with the exception of what he called “minor violations” and an “ambiguous incident” between the Lebanese and Syrian borders. It is unclear which incident he was referring to.

“What prevented the enemy from launching raids was his fear of going into a major confrontation with the resistance,” said Nasrallah. “The enemy today is more than ever worried about its existence because of what is happening in Palestine and the escalation of the [Iranian-backed] Axis of Resistance.”

In August of last year, Israeli attack helicopters and fighter jets struck posts belonging to Hezbollah along the Lebanese border after IDF troops were fired upon near Kibbutz Menara in the Upper Galilee.

Nasrallah also referred to alleged Israeli airstrikes in Syria, saying that the airstrikes are meant to confront the “growing capabilities of the resistance,” but stressed that these strikes did not achieve their goals.

Concerning a Hezbollah militant who was killed in an alleged Israeli airstrike near Damascus last year, Nasrallah stated that the terrorist group had aimed to kill an Israeli soldier in retaliation, but “the circumstances did not exist for” this to occur.

Nasrallah warned that the rocket fire on Friday was only a response to the Israeli airstrikes on Lebanon and not a response for the death of the Hezbollah militant in Syria nor a response to the death of a Hezbollah militant who attempted to cross the border into Israel in protests during Operation Guardian of the Walls in May. He warned that the response for those deaths would occur at an appropriate time.

“Our response to the air raids may be anywhere in the north of occupied Palestine, whether it is in the Galilee or the Golan, and our options are open,” warned Nasrallah. “The biggest folly the enemy will have committed is when he decides to go to war with Lebanon.”

During the speech, Nasrallah also offered his condolences to the Hezbollah members killed in clashes with Sunni Arabs in Khaldeh in the past week. Despite the clashes and scuffles on Friday between Druze residents and the Hezbollah terrorists who fired the rockets, Nasrallah warned Israel not to “bet on internal division.”

Concerning the incidents in Khaldeh, Nasrallah claimed that the murders were premeditated “massacre,” and that Hezbollah’s lack of retaliation was based on “wisdom and responsibility, not weakness.” Nasrallah called for all the perpetrators of the murders to be arrested and stated that he is personally following up on the issue daily.

Druze residents of the Shwayya village near where the rockets were fired from detained the Hezbollah terrorists responsible for launching the rockets. Video reportedly from the scene, showed the residents fighting with the terrorists before forcing them into a car.

Nasrallah stated on Saturday night that the incident hurt him “very much” and was shameful and very bad, but that it was “well-known people” and not people from the village who attacked the Hezbollah terrorists, adding that Hezbollah would not hold the residents of the village nor the Druze community responsible and urging supporters not to attack Druze people.

“What happened in Shwayya was not something simple or fleeting, and it has serious connotations,” said Nasrallah.
Nasrallah added that Hezbollah would have launched the missiles from their own homes if they could, but that in order to target Israeli areas without civilians in order to avoid an escalation they had to pass through the Druze villages.

During the speech, Nasrallah additionally rejected claims that Hezbollah was responsible for storing arms or ammonium nitrate where an explosion took place at the Beirut Port last year, calling the claims “trivial” and “ridiculous” and an effort to turn the blast into a political and sectarian issue. The Hezbollah leader claimed that investigations were being held up in an effort to help insurance companies avoid paying the victims.

On Saturday night, shortly before Nasrallah’s speech, the IDF arrested a suspect who crossed the border from Lebanon into Israel near Arab al-Aramshe in the western Galilee. The incident was not a security issue, according to the IDF.
On Friday, 19 rockets were fired from southern Lebanon into northern Israel, with the Iron Dome intercepting 10 rockets and six rockets falling in open areas near Har Dov along the Lebanese border. The other rockets fell inside Lebanon. There were no injuries or casualties.

It was the sixth such attack in recent months, and the first that Hezbollah admitted being behind.

According to a statement released by the group, the barrage was fired in response to the Israel Air Force airstrikes carried out early Thursday morning after Palestinian operatives fired three rockets towards the northern city of Kiryat Shemona on Wednesday.

The IDF had initially retaliated Wednesday by firing some 100 artillery shells towards the launch sites and later carried out airstrikes.

Not long after the rockets were fired from Lebanon, the Lebanese Army announced that it had arrested four people it said were responsible for firing the rockets and confiscated the vehicle used to launch the rockets. By Saturday night, at least one of them had been released.